Iowa volleyball met No. 7 Illinois and Northwestern on the road this weekend. A sweep by Illinois set up a five-set win against Northwestern. 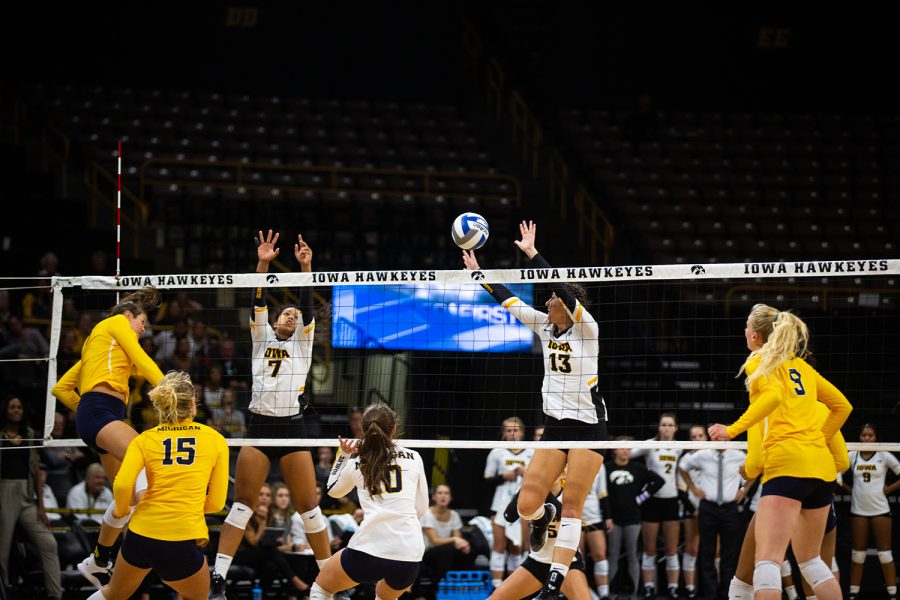 Sarah Wing and Brie Orr jump to block the ball during Iowa's match against Michigan at Carver-Hawkeye Arena on Sept. 23, 2018. The Hawkeyes were defeated 3-1.

Iowa volleyball ended a two-match skid on Sunday with a win against Northwestern in Evanston.

The Iowa squad was hungry for a victory after losing soundly to a strong Illinois team earlier in the weekend.

It happened in a tightly contested, five-set match with Taylor Louis, Brie Orr, and Molly Kelly coming up big for the Hawkeyes. Louis knocked out the Wildcats with a game-winning kill in front of her friends and family.

Her performance was especially important, given the Hawkeyes’ struggles against Illinois on Sept. 28.

The first set set the tone for the match with scoring runs coming from each team. The Wildcats started out hot, hopping out to a 4-1 lead in the first moments of play.

Northwestern standout Nia Robinson demonstrated why she’s considered one of the top hitters in the conference early, posting 9 kills in the first set.

However, mid-set runs by the Hawkeyes, largely led by Louis’ 5 kills in the set, tied the set at 22. This was not enough; Robinson regained fire and posted 3-straight kills to close out the victory for the Wildcats.

The second set had much of the same flavor as the first. The roles were reversed this time, however, and the Hawkeyes led for much of the set.

This was largely thanks to a 6-point run in the middle of the set from the Hawkeyes. Contributions came from all over the floor, with kills from Louis, Courtney Buzzerio, and Cali Hoye.

Despite a streak from the Wildcats, the Iowa defense won the set with strong blocks from Orr and Sarah Wing.

The third was different for the Hawkeyes. Thanks to a 14-4 run in the middle of the set, the Hawkeyes easily closed it, 25-11.

The momentum carried into the fourth, but Northwestern eventually gained its footing and went on a 5-point run to put it up, 12-10. The squads traded blows, but a kill by Robinson and a late-set block tied the match at two sets.

Iowa and Northwestern traded blows in the fifth set, but Louis was hungry. She threw down the match-winning kill on an assist from Hoye.

The win came at a great time for the Hawkeyes after losing its two most recent matches. The loss against No. 7 Illinois was particularly tough, coming via sweep.

The Hawkeyes couldn’t get much going in the match against the Illini, with none of their leaders able to score more than 10 kills individually. The match against the Wildcats struck a very different tone, and Louis and Coyle posted 38 of the team’s kills.

“We talked about how our team keeps developing and how we took set two in a come-from-behind victory,” head coach Bond Shymansky said in a release. “We then really took it to them in the third set, but then we were in the battle for the fourth and fifth set. It was a great team effort, and it was scrappy game all the way until the end.”

Defensively, the Hawkeyes were hot. Iowa came up with 23 blocks in the match, a season high, with Coyle posting a team-high of 9.

The Hawkeyes’ ability to fight through losing skids will prove valuable as Big Ten play continues, and the flashes of strength from the team’s leaders in its match against Northwestern will be healthy for morale.