The Hawkeyes took down Michigan State and No. 23 Ohio State in a big weekend. 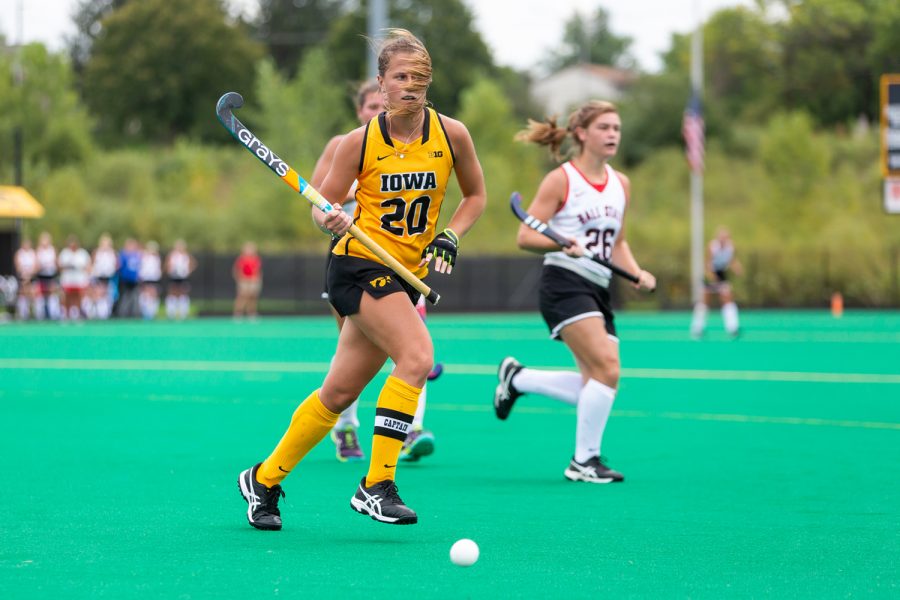 Iowa's Sophie Sunderland chases down the ball during a game against Ball State on Sunday, Sept. 2, 2018. The Hawkeyes defeated the Cardinals 7–1.

The Iowa field-hockey team returned home on Sunday from its weekend of competition with two more Big Ten wins. The Hawkeyes defeated Michigan State, 4-0, before topping No. 23 Ohio State, 2-1, in overtime.

Despite dominant play in Sept. 28’s match against the Spartans, the Hawkeyes couldn’t find a way to convert in the first 35 minutes of play. Iowa registered 6 shots — 5 on goal — while also scooping up 4 penalty corners. Although Iowa was unable to capitalize on the penalty corners in the first half, it finished 3-of-4 in the second half.

Ellie Holley ended the stalemate when she scored in the 41st minute on a rebound of a penalty corner, assisted by sophomore Maddy Murphy.

Junior Sophie Sunderland kept the Hawkeyes rolling when she scored the second goal of the match by redirecting a shot from Makenna Grewe.

The Hawkeye defense prevented the Buckeyes from getting a single shot off for the entire game.

“We told the team at halftime to keep chipping away and to continue to attack,” head coach Lisa Cellucci said in a release. “We needed to clean up how we were framing the goal, and once we did that, we had cleaner looks. Our corner execution was much better in the second half.”

After the win against Michigan State, the Hawkeyes traveled to Columbus to take on the No. 23 Buckeyes. Sunderland scored her fifth goal of the season, assisted by Birch, to send Iowa into halftime up 1.

Nine minutes into the second half, Ohio State responded, and Kelsey Nolan scored the equalizer. The game remained 1-1 until the end of regular play.

During the first overtime period, the Buckeyes appeared to be the favorite as they recorded 4 shots in comparison to Iowa’s 0. However, the Hawkeyes took control in the second overtime period. In the 85th minute, Birch scored the game winner on a pass from Sunderland to snare the victory.

The Buckeyes outshot the Hawkeyes, 11-9, and had 8 penalty corners — 3 more than Iowa — but still couldn’t get the job done.

RELATED: Hawkeye field hockey looks to bounce back on road

“The definition of grit was displayed by the Hawks,” Cellucci said in a release. “Ohio State is an outstanding team, and they gave us a battle for more than 87 minutes of play. We need to be able to problem-solve throughout the game and clean up our decision-making, especially when we are fatigued. We are proud of the team for the way they fought for each other today. They were not willing to leave Columbus without a win.”

The Hawkeyes are now 10-2. After two wins this weekend, Iowa is 3-1 in the Big Ten and 3-2 against top-25 opponents. The Hawkeyes will return home this week to face No. 6 Michigan on Friday and No. 25 Stanford on Oct. 7 at Grant Field.