A recent trial conducted through the Big Ten Cancer Research Consortium is studying new approaches to treating locally advanced bladder cancer, which could provide a safe alternative for patients unable to undergo chemotherapy or surgery. 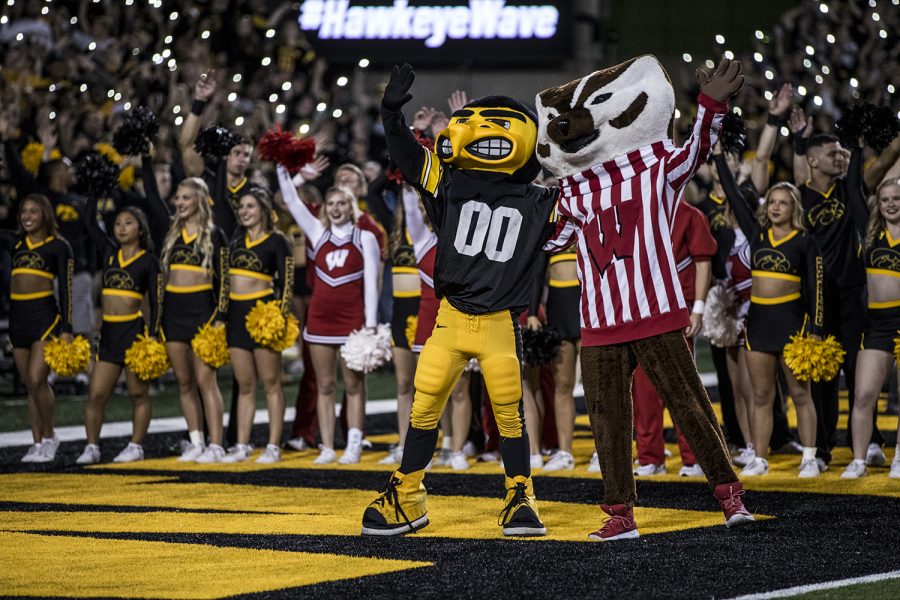 Herky the Hawk and Bucky the Badger wave to the Children's Hospital during Iowa's game against Wisconsin at Kinnick Stadium on Saturday, September 22, 2018. The Badgers defeated the Hawkeyes 28-17.

While the University of Iowa and other Big Ten schools might be opponents on the field, they work hand-in-hand when it comes to fighting cancer.

The trial is just one example of the studies conducted through the Big Ten Cancer Research Consortium, an association that allows cancer research centers at Big Ten universities to collaborate on ideas and knowledge and to conduct clinical trials as a single unit.

“The goal is to conduct research together that none of us could do on our own,” said George Weiner, the director of the UI Holden Comprehensive Cancer Center. “Very often, there aren’t enough patients at any one cancer center who are interested or eligible to participate [in a clinical trial] to let one cancer center do the trial on its own. So the idea is we’re all going to work together, and that way, more patients will have access to the studies, and we’ll get answers more quickly.”

Together, the two work to find new ways bladder cancer can be treated in patients who are not candidates for the standard treatment of localized bladder cancer, which involves chemotherapy followed by surgery. For this trial, the answer may lie in the use of immunotherapy.

“Immunotherapy is a new modality in the cancer field. The idea of it is to boost your own immune system to attack the tumor,” Zakharia said. “We are pairing immunotherapy with radiation therapy to control the [cancer] in place. Our theory is that immunotherapy will boost the effect of the radiation therapy. This trial is still early in the process, the combination seems to be safe, preliminary results seem to be promising.”

Emamekhoo said positive results in the trial will allow the effort against cancer to treat an even larger population of patients. Radiation and immunotherapy may have a future as a healthy alternative for bladder-cancer patients ineligible for or unwilling to undergo chemotherapy or surgical treatment.

While the trial may only involve a handful of patients who fall into this category, Emamekhoo and others don’t believe the number makes the advancement any less significant.

“Although [the population] is small, we don’t want to ignore that group of patients, or not pay enough attention to that group, so we are working to have a better option for any patient with bladder cancer,” Emamekhoo said.

Weiner noted that the Big Ten Cancer Consortium unites universities to make studies such as this possible by allowing researchers to conduct studies they couldn’t have done on their own. New advancements, discoveries, and ideas are easily and quickly communicated among universities thanks to the consortium.

“It’s an incredibly exciting time in the field of cancer research,” Weiner said. “A lot of the investments we’ve made in basic science research over the past couple decades are starting to pay off now. We still have a lot to learn, but we’re able to help patients now that we couldn’t have helped just a few years ago with some new approaches.”