UI Student Security has grown considerably during its two years of operation, starting new initiatives and hiring many more workers. 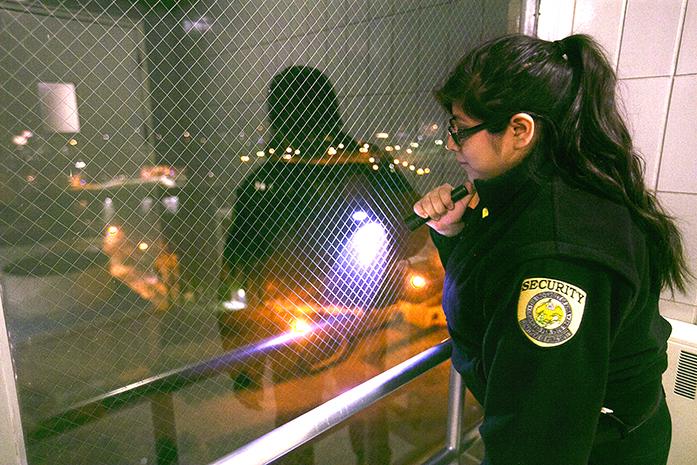 The University of Iowa Student Security Division has grown in both size and scope in its two-year history.

In prior years, the UI staffed a full-time, professional security force. However, it began hiring more students, and now the staff has evolved to be almost entirely composed of students.

“We always had student employees, at any given time about three to five,” Security Supervisor Beau Hartsock said. “The security division was made predominantly of full-time security officers. We still have existing officers from that, but they have evolved into leadership roles for what is now almost a 100-person student security force. It evolved from five students to almost 100 in the past two years, and we’re still hiring more.”

Hartsock would like to have at least 130 students on the security force, given the current demand for the services.

The responsibilities of a Student Security officer can vary greatly, from driving Nite Ride, keeping watch over UI buildings, patrolling the downtown on weekend nights, to guarding the charity houses in the city.

“Whenever security presence is needed or requested, they come to us,” Hartsock said.

Student officers are trained by the remaining security officers who used to do the tasks of student officers. They teach students to operate the radio, go with them on initial patrols, and teach them things like discretion and proper guidance.

“In addition to the training, they always have the support of a full-time police officer if an incident does escalate to the point it requires a law-enforcement response,” public information officer Hayley Bruce said. “We always train to maintain safety, not get involved in anything dangerous. They carry a radio and have constant contact with the department.”

Along with the influx of student officers, their clients, and overall responsibilities, last year, they have also launched a new initiative, SHOUT.

“SHOUT, or Students Helping Out, is kind of an ambassador program where we have select student-security officers patrol the downtown area and work closely with the Iowa City Police Department,” Bruce said.

Student supervisor Liz Monroe and her fellow officers patrol the downtown streets until 3 a.m. most weekend nights and help those in need find rides and friends. They carry radios and have direct contact with the local police departments.

“When we go downtown, we look for people who are lost, without their friends, maybe who drank too much, and see if they need help getting home or finding their group,” Monroe said. “A lot of people don’t know who we are yet, but as we interact more, they talk with friends and begin to recognize us.”

Hartsock believes SHOUT is an important part of downtown safety for UI students and thinks it will have a positive effect for all involved.

“It’s a really good program. When police officers are dealing with someone lost or who may have had a little to drink but don’t necessarily deserve to go to jail, they are using valuable time and resources to help this person. When SHOUT is close by, [officers] can take care of the situation and get them home safely,” Hartsock said. “It kind of bridges the gap between police and the university community. Students may not feel as threatened interacting with SHOUT as they may with the local police.”