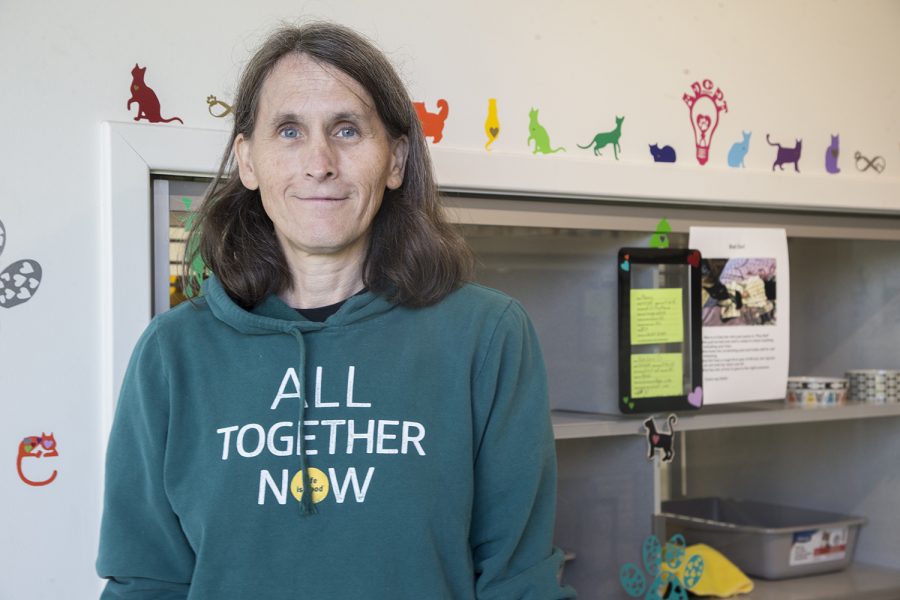 Whitmore has more than two decades of experience working with animals in the Iowa City area, serving as a veterinary technician and animal-control officer before her recent promotion.

She received a degree in animal science and planned to be a veterinarian before she got a summer job as a veterinary technician. Whitmore said she was then hooked in working in the animal-care field and hasn’t look back.

“Chris Whitmore has been an Iowa City Animal Control officer since 1993,” an Iowa City press release said. “She brings a wealth of knowledge along with a commitment to the humane treatment of all animals in our community.”

Whitmore takes over for former Animal Services coordinator Liz Ford, who recently resigned to pursue other career paths, according to the press release.

“I’ve learned how to deal with the public, how to deal with volunteers, and we have a great staff here that is eager for me to succeed,” Whitmore said. “I’ve known a lot of them for many years, so it’s just a continuation of what Liz started, because we think she’s got it on the right path.”

Whitmore said she hopes to expand the program and approach her work with the same compassion and transparency as Ford did.

“Everybody’s goal is to not have to euthanize,” she said.

Whitmore believes that her experience in animal enforcement will help her with the welfare aspects of her new position, including a recently passed ordinance limiting the time dogs can be on a tether. She said a large part of her job is making sure animals are safe and healthy.

“We just passed an ordinance where dogs can’t be out continuously on a tether,” Whitmore said. “Twenty years ago, it was not uncommon for people to have dogs out on a tether 24 hours a day.”

She said it’s inhumane to keep dogs on tethers for that long.

Denise Brotherton, who was recently promoted to be Iowa City’s first female police captain, said that while there was a nationwide search, Whitmore was the right person for the job.

“I’ve never been so impressed with an agency and its commitment and the compassion it has,” Brotherton said. “Liz Ford did phenomenal things [at the shelter], and I know that Chris has that same commitment.”

Brotherton also noted that she and Whitmore have worked together many times throughout their years of service.

“We’re each embarking on a new part of our careers. and we’re both excited,” Brotherton said.

While Whitmore and Brotherton believe that Ford’s efforts have placed the shelter in a good position, Whitmore said she hopes to expand the shelter’s services to the community.

“I want to learn more about the volunteer part of it,” Whitmore said. “I know that our volunteers are a great asset. I’d like to get more involved, learn about their strengths and weaknesses. Our community is growing, and we need to grow with it.”