2020 presidential hopeful Andrew Yang wants to give every American $1,000 a month

Hoping to make a jump from New York business to the White House, Andrew Yang believes a monthly government stipend will replace jobs lost to robots 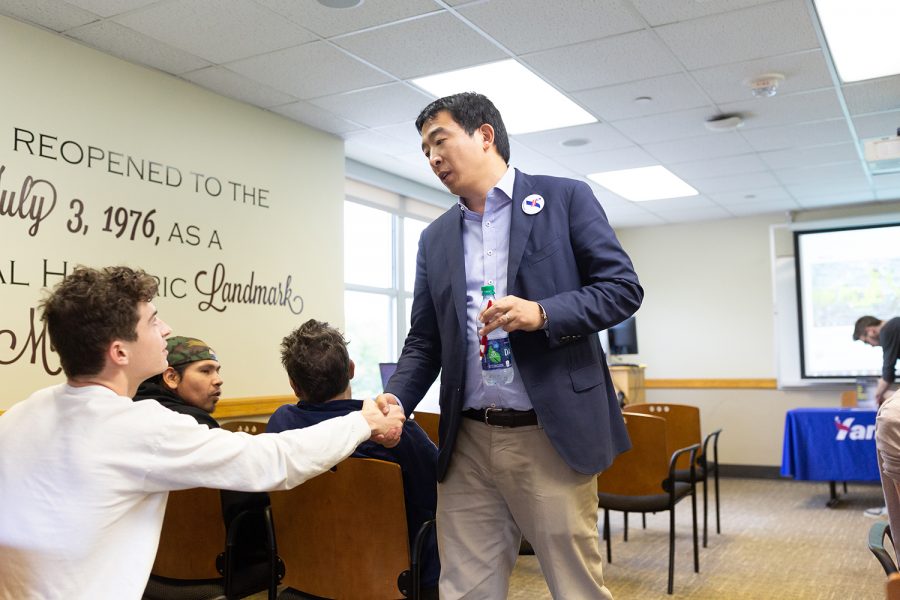 Democratic presidential candidate Andrew Yang shakes hands with Harry Zielinski of Iowa City during an appearance sponsored by the college Democrats in the IMU on Monday, Sept. 24, 2018.

Though he has not previously held elected office, Yang said an early start to his campaign will be beneficial in an interview with The Daily Iowan before a campaign event at the IMU.

“For most people, I’m going to be quite new, so I needed to introduce myself,” Yang said.

The upstate-New York native studied economics and political science at Brown University prior to attending law school at Columbia University. In 2011, he founded Venture for America, a national entrepreneurship fellowship.

He’s centered his campaign on human labor and protecting jobs from being replaced by automation. One of his campaign focuses is a “freedom dividend,” or monthly payments of $1,000 to each American adults ages 18 to 64.

“… that’s the big sort of measure we need to take as a society to help our citizens get through this technological and cultural transition but also to improve your lives for a secure future,” Yang said.

The unconditional stipend would ease what Yang calls a technological revolution, in which America’s advancements in technology will soon replace humans in manufacturing, retail, trucking, and fast-food jobs, among others.

During his campaign, he will give one Iowan and one New Hampshire resident $1,000 a month as a test of his freedom dividend.

His proposal is not necessarily a new concept. The freedom dividend is a renaming of a universal basic income policy. Critics point to the cost of a stipend as a reason not to implement it. For one year, giving $12,000 to every American adult would cost around $2 trillion, according to census population data.

This is the businessman’s second trip to Iowa since August, when he attended the Iowa State Fair and headlined the Iowa Wing Dings event, an Iowa Democratic fundraiser. He’s also made trips to New Hampshire, which holds the nation’s first primary.

Iowa will once again hold its first-in-the nation status with the caucuses for the 2020 election set for Feb. 3.

“Iowans’ votes are worth his or her weight in gold,” Yang said in reference to the state’s battleground status.

In his visit to Iowa City, he said engaging younger voters is another of his priorities.

“Young people see they are being set up for a really tough road ahead, but I’m coming in and saying it’s not your imagination,” he said. “We, the older generation, have shafted you all, and I’m going to do my best to make it right, but I need your help, because without your help, I can’t rewrite the rules of the economy so that it serves your interests moving forward.”

Yang is not the first Democrat to announce a run for the White House. Rep. John Delaney, D-Md., announced his candidacy just five months into President Donald Trump’s term, in June 2017.