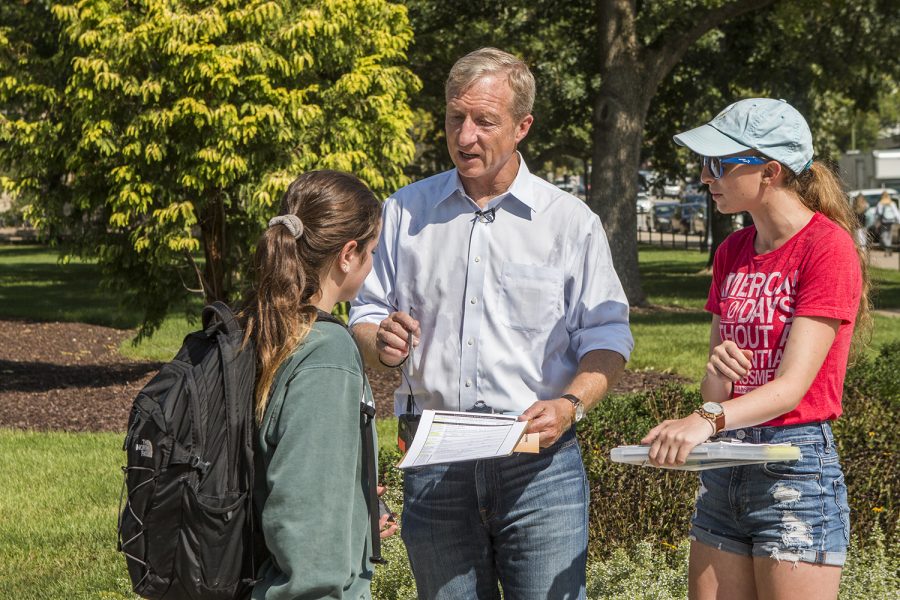 NextGen Founder Tom Steyer discusses voting with students at the Pentacrest on Thursday, Sept. 20, 2018. The organization works to engage students and to help them register to vote in November.

Iowa’s largest voting bloc — 18- to 35-year-olds — has the lowest voter turnout rate in the state.

Billionaire and Democrat Tom Steyer said he seeks to change that in the upcoming midterm elections.

Steyer, the founder of progressive advocacy group NextGen America, visited Iowa City on Thursday to work alongside other members of the organization to register young voters and encourage them to vote in the upcoming election.

NextGen has invested approximately $35 million in efforts aimed at getting young people to vote, Steyer said. Chapters of the organization are active on 41 campuses across the state of Iowa and have registered more than 11,000 young voters since February.

“This is the largest youth-voter mobilization in American history. But it’s also the biggest crisis in American history in terms of participation,” Steyer said. “To a large extent, we think that democracy depends on the underrepresented groups, young people and different underrepresented communities, largely communities of color, to show up and vote proportionally so that we get a fair representation of what people want.”

According to the Iowa Secretary of State’s Office, registered voters between the ages of 18 and 35 make up 28.3 percent of Iowa’s registered voters, making them the largest voting bloc in the state. However, in 2016, Iowans ages 18 to 34 years old had the lowest voter turnout rate compared with other age cohorts in the state.

Nationally, voters ages 18 to 29 also boast the lowest turnout rate compared with other age groups in every election since 1986, according to U.S. census data compiled by the U.S. Elections Project.

“… If we all vote, we will actually get leaders that stand up for issues that young people care about, because right now we have folks like Kim Reynolds, David Young, and Rod Blum who just aren’t representing young Iowans at all,” said Hayley Hager, the Iowa youth director for NextGen.

Hager said she believes there are a variety of issues that motivate young voters.

“Older people stereotype young people as single-issue voters, but actually, that’s not the case at all. We care about a multitude of issues,” Hager said. “I think some of the biggest ones are obviously cost of college, cost of health care, and then racial- and social-justice issues have been a really big priority for young people here in Iowa.”

Caroline Barlow, a fellow with NextGen in Iowa City, said she got involved to engage youth in politics and elections.

“… Especially after the 2016 election, I just caught myself being frustrated all the time, and I just wanted to do something,” Barlow said. “Now that I’m with NextGen, I just see the power that young people have and the change that they can make.”

Steyer said the low voter-turnout rate among young voters is concerning. To have a truly representative democracy, he said, it is important that everyone’s voice is fairly represented, including that of young people.

“We are trying as much as possible to engage young people to know what the issues are, to understand how valuable their participation is, and to know that, together, their generation can change Iowa, the United States, and the world,” Steyer said.