On Tuesday night, the Iowa City City Council has authorized the acquisition of property interests and permanent easement of property owners’ storm sewers for the construction of the Stevens Drive Stormwater Pump Station Project. 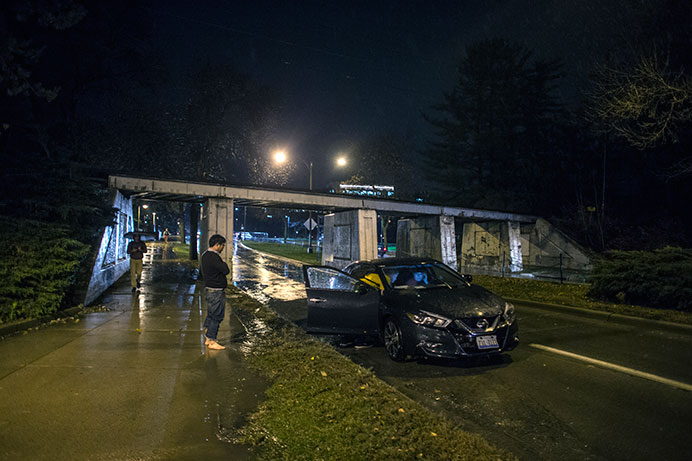 A man directs traffic around his friend's stalled car on Wednesday, Nov. 11, 2015. Heavy rainfall and flash flooding caused the car to stall as he drove down the street.

On Tuesday night, the Iowa City City Council authorized the acquisition of property interests and permanent easement of property owners’ storm sewers for the construction of the Stevens Drive Stormwater Pump Station Project.

In light of recent bad storms and flash flooding, as well as looking back on the 2008 flood, the project seeks to reduce emergency response time while streets are flooded. According to the National Weather Service, Iowa City received 8.36 inches of rain from August to September. This is 3.86 inches more than the normal average.

The Stevens Drive project will include a new structure for pump stations, a raised barrier, wet wells, new sewer pipes, as well as modifications to existing storm sewer pipes. The new structures will be made by salvaged pumps from the wastewater treatment facility.

The project also is hoping to place a pump on Normandy Drive. The project is hoped to be finished by Spring of 2019.

Flooding in 2013 and 2014 required pumps to be manually operated and maintained. The new project looks to provide a permanent and dependable pumping system.

In the 2008 flood, 20 university buildings were damaged and over $700 million has gone into repairs. This doesn’t even take into account households that were affected outside of campus. In a study done by the University of Iowa library, the river had crested at 31.35 feet, passing the 28.52 foot record.

RELATED: 10 years later, the collective memory of the 2008 flood remains