Hawkeye volleyball has enjoyed great success in the last two weeks. As it enters the always-competitive Big Ten play, it is important to figure out the source of the success. 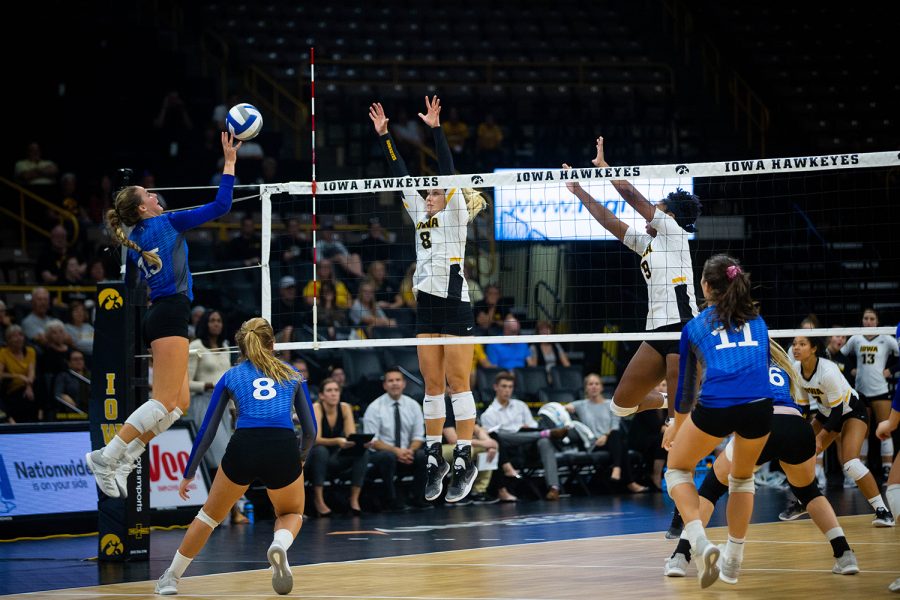 Reghan Coyle and Amiya Jones jump to block a spike during Iowa's match against Eastern Illinois on Sunday, September 9, 2018 at Carver-Hawkeye Arena. The Hawkeyes won the match 3-0.(Megan Nagorzanski/ The Daily Iowan)

The Iowa volleyball squad is on a hot streak. The Hawkeyes closed out nonconference play with six wins in a row, setting them up for a run in conference play.

Keeping in mind that the Big Ten is one of the toughest volleyball conferences in the country, it’s clear Iowa head coach Bond Shymansky and his players found a way to turn things around after losing to Lipscomb, Colorado, and Washington early in the season.

With Big Ten competition opening Friday against Michigan State, it’s a good time to dig into the numbers the squad has put up.

That is the Iowa squad’s current winning streak. This is the longest such stretch for the Hawkeyes since their nonconference slate in 2017, but it has occurred against fiercer competition.

The streak did not happened by accident.

The squad has put up 14.54 kills per set during the streak, easily outpacing opponents’ 12.77. The Hawkeyes’ aggressiveness is helpful, and it has helped them sweep their opponents in three of their last six matches.

The Hawkeyes are passing well and making far better contact than their opponents as well. Over the course of the streak, only one of the six opposing teams has posted a hitting percentage of more than .200. Iowa has done so in all but one of the last six matches.

Consistency in hitting percentage and aggressiveness in kills has greatly contributed to recent success.

The Hawkeyes average 16.05 digs per set thus far, second in the Big Ten.

Over the last six matches, Iowa has outpaced opponents in digs per set, 17-14.91. This differential has been vital, and the growth of the defense is great for Iowa fans.

Senior defensive specialist Molly Kelly leads the defensive effort. She enjoys a healthy 5.19 digs-per-set ratio, enough to put her at second in the Big Ten.

This stat has been vital for the Hawkeyes, largely because their opponents have averaged a hitting percentage of .179 so far this season.

During the last six games, the Hawkeyes have outpaced their opponents in both kills and hitting percentage. Their aggressiveness has paid off, and they  have been consistent as well.

This largely comes from practice. A focus on fundamentals, including passing and solid contact, has improved these numbers.

Senior Taylor Louis has been very consistent this season. Her .312 hitting percentage is even more impressive after noting that she leads the Big Ten in kills per set with 4.41. Her experience, aggressiveness, and consistency give the Hawkeyes a big boost, and that will be valuable in the coming weeks.

The Big Ten competition will grow fiercer, and the strengths the Hawkeyes have demonstrated will become more important. There is no doubt whether their mission of true mental toughness will aid them in the conference jungle.