Denise Brotherton was promoted to captain after over two decades of service to Iowa City. Brotherton is the first woman to fill this position and looks forward to her new role and responsibilities. 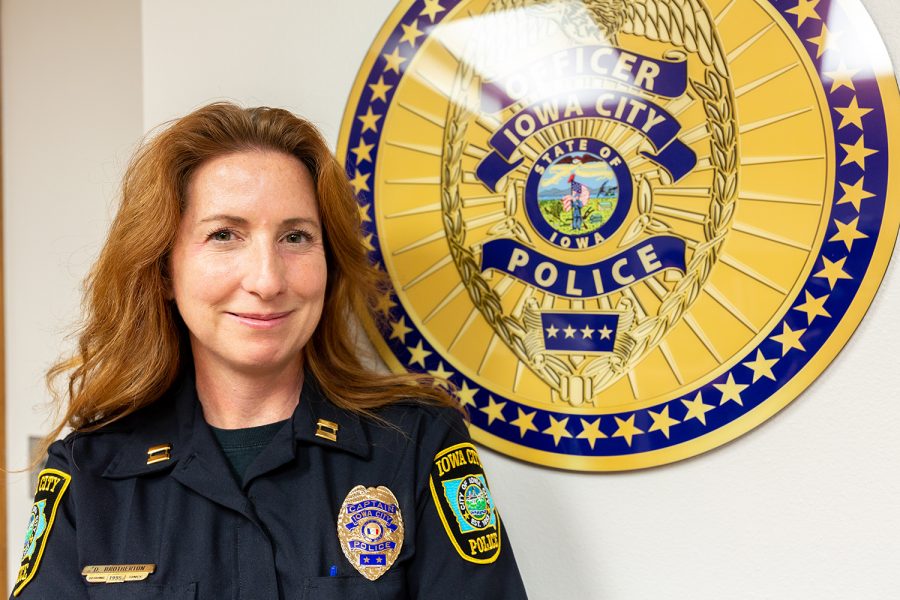 Captain Denise Brotherton is interviewed by the media on Wednesday, Sept. 12, 2018. Capt. Brotherton is the first female captain of the ICPD.

After more than two decades of service to the Iowa City community, Denise Brotherton has been promoted to the rank of police captain.

Brotherton joined the force in 1995 and attributes her outlook on policing and decision to join to her upbringing and past encounters with local police.

“I grew up in Cedar Rapids, down on the Southeast Side. We had interactions with police, and I always just felt that I want to be a part of the solution, not the problem,” Brotherton said. “I thought, ‘If I ever do this, I’ll treat people differently.’ Everyone deserves respect and deserves to be treated decently regardless of where they come from, where they are, or what’s going on.”

After rising through the ranks, she has been selected to continue as captain.

“The chief makes the final determination when there are positions open,” police Sgt. Derek Frank said. “In this case, there were two candidates up for the position.”

Frank said he is enthusiastic about working under Brotherton.

“She’s extremely diligent and timely,” Frank said. “She gets stuff taken care of. I am happy to work with her again and have her as my supervisor. We work well together.”

Brotherton said she is excited about the change of pace from her previous positions. She spent most of her career as a beat officer, going out on patrol and helping people in the community day-to-day. Now, she is on the administrative side.

While Brotherton will fill many new roles in the department, there is one aspect of the job she particularly looks forward to.

“The most exciting part is dealing with animal services, which is our Animal Care & Adoption Center,” Brotherton said. “It’s an awesome place; there are awesome people who work there. We respond to animal calls and work with animal-control officers. I never really knew workings, I got to know people down there, and it’s just an awesome agency.”

Animal services is a subsidiary of the police force. It works under the umbrella of, and hand-in-hand with, the police.

Animal services Officer Chris Whitmore, who has worked with Brotherton for around 20 years, looks forward to Brotherton heading her department.

“Capt. Brotherton and I have worked together for many years,” she said. “We have gone on calls together and done work that the service requires. She has never not helped us.”

Whitmore said Brotherton is always around to lend a helping hand, regardless of her position on the force.

Brotherton is still settling into her new role and responsibilities, but she is ready for the work she will do in the Iowa City community.

“I want people to be proud of us,” Brotherton said. “I think the people who deal with us, whether it be negative or positive, walk away with an impression that we are professional. I want to go past that to where they see us as an active part of the community. Where the officers are not just there to watch them but are part of it and there for them.”