The status of privatized Medicaid in Iowa has been a point of contention between the two gubernatorial candidates, Gov. Kim Reynolds and Democratic candidate Fred Hubbell, as they head toward the November election. 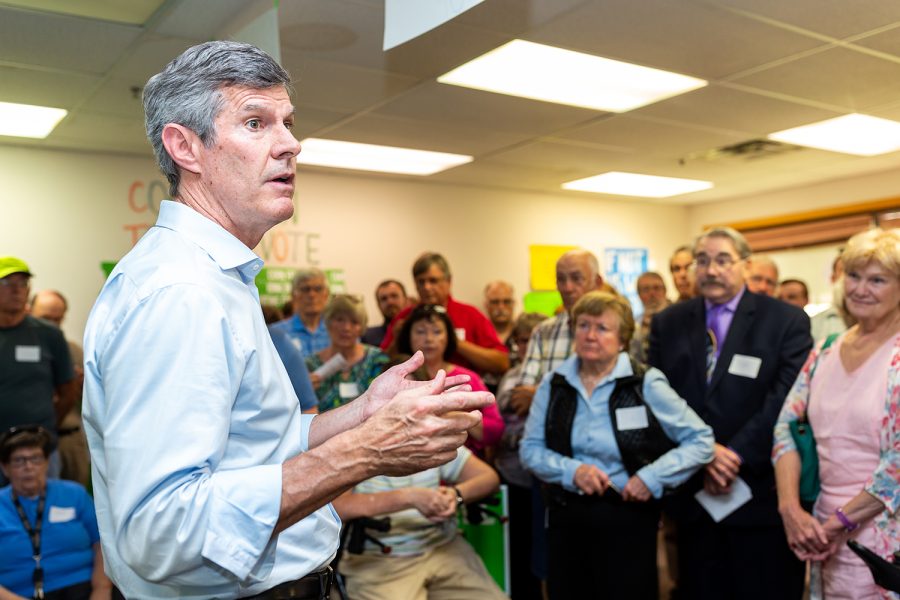 Fred Hubbell, the Democratic nominee for governor, speaks to supporters in Iowa City on Wednesday, Sept. 12, 2018.

Two candidates for Iowa’s chief executive paint different portraits of the state of privatized Medicaid in their campaigns.

In a Democratic field office in Iowa City on Wednesday evening, Iowa Democratic gubernatorial candidate Fred Hubbell contended that the privatized Medicaid system under his opponent was a “disaster.” However, Gov. Kim Reynolds, a Republican, has argued the system is headed in the right direction.

For Hubbell, bringing the program that provides health-care coverage for low-income and disabled Iowans back under government management has been a staple of his run for governor. This week, his campaign is hosting six “Medicaid Roundtable Discussions.”

“I’d like Kim Reynolds to go around with me to all these roundtables that I’ve been doing around the state,” Hubbell told reporters Wednesday. “Every single person in every one of those has told us it’s a disaster. Whether you’re a patient or a provider, benefits are denied and reduced.”

Hubbell said his plan to bring Medicaid back under state control — which, he said, would be a priority from the first day he takes office if elected — begins with changing contracts with managed-care organizations that provide service to Medicaid members.

“They do whatever they want for their goal, and that’s to reduce costs and make money,” Hubbell said. “So I’m never going to sign a contract, it’s called a contract of adhesion, where they have no choice, they have to do what the providers tell them what to do. That’s wrong; we should never have agreed to that in our state.”

Reynolds, however, has defended the 2015 decision to transfer care to private managed-care organizations, saying she is working to make Medicaid coverage sustainable in the long-term for Iowans.

“[Hubbell] wants to go back to a broken, unsustainable system that could not guarantee long-term health care for vulnerable Iowans,” Pat Garrett, Reynolds’ campaign spokesperson, said in an email to The Daily Iowan.

Reynolds served as lieutenant governor when her predecessor, then-Gov. Terry Branstad, signed an order to transfer responsibility of federal- and state-funded Medicaid to private managed-care operations.

Branstad said in his 2017 Condition of the State address that privatized Medicaid would result in $232 million in savings. In December 2017, the Iowa Health & Human Services Department released a quarterly report listing savings to the state as $47 million. The state changed that number to $141 million in May without explanation, according to the Des Moines Register.

Documents from Human Services released Tuesday show Medicaid costs per enrollee went up 11 percent from fiscal 2018 to fiscal 2019, surpassing $10,000. Costs per person had dropped about 5 percent in the previous two years.

In Iowa in fiscal 2019, Medicaid is set to be funded 60 percent from federal funding, 26 percent from the state’s general fund, and 14 percent from other sources.

Human Services announced in August that Medicaid costs to the state would increase 7.5 percent in new contracts with managed-care operations Amerigroup of Iowa and United Healthcare Plan of the River Valley. This is an increase from the $1.34 billion for the program the state appropriated to the program for fiscal 2019.

Human Services Director Jerry Foxhoven said the new contract resulted in improvements to oversight to the program in the August release.

“The new contract makes it clear, we are committed to providing strong oversight on behalf of the 680,000 Iowans we serve,” Foxhoven said.