In three rounds of play, the Hawkeyes struggled to find a groove and placed 13th among 16 teams. 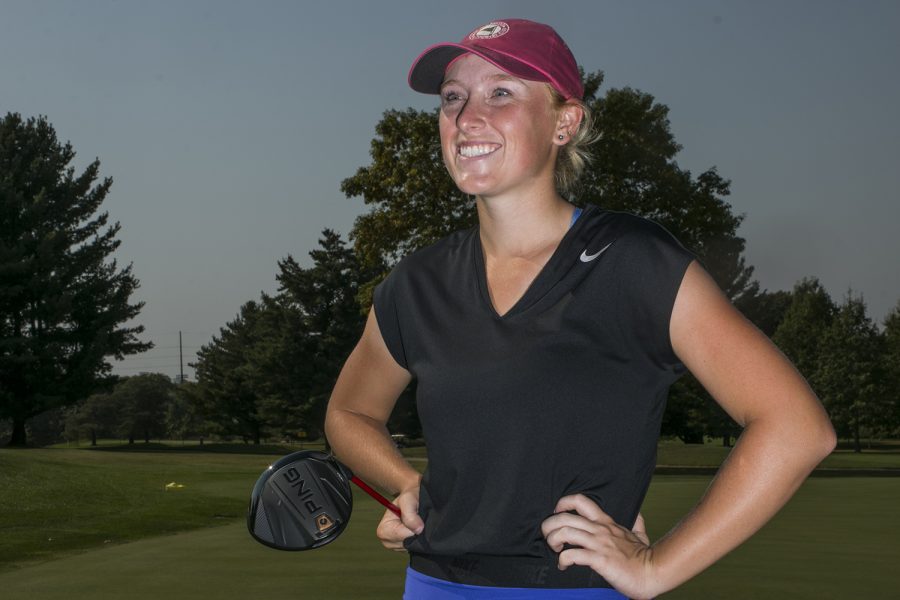 Iowa golfer Kristin Glesne stands for a portrait at the Hoak Practice Facility at the Finkbine Gold Course on Thursday, Sept. 14, 2017.

The Iowa women’s golf team concluded its play at the Branch Law Firm Invitational in Albuquerque, New Mexico, after two days of play. The Hawkeyes tied for 13th among 16 teams in a field stocked with strong competition.

Captains Kristin Glesne and Shawn Rennargarbe led the Hawkeyes. Glesne shot a 221, best on the squad, while Rennargarbe was second on the team with a 229.

Freshmen Dana Lerner and Manuela Lizarazu made their college débuts at the invitational. Lizarazu, who made head coach Megan Menzel’s “final five,” hit the ball well for her first event while shooting a 230.

Lerner competed well, too, but as an individual because she was not a part of the final five. Though her score did not count toward the team’s score, she shot a 228 in her first event, which would have been second.

Sophomore Stephanie Herzog and junior Rachel Fujitani rounded out the rest of the squad; Herzog shot a 235 and Fujitani a 237. The team finished with a score of 909, 51 shots behind winner Kent State.

Iowa could not get ahead of the competition because the golfers couldn’t knock down birdies. Kent State had the most birdies at 48, doubling the number the Hawkeyes produced. If the Hawkeyes could increase their number of birdies, especially by performing better on par 3s and par 4s, their team score would be greatly reduced.

The best thing a team can do to better itself is locate the shortcomings and work on them. The Hawkeyes can see where they fell short and improve on that. The tournament was, after all, just Iowa’s first of the season.

The start was vastly different from last season’s first competition. The Hawkeyes placed seventh of 16 last year at the same event.

However, there is a silver lining to this week’s performance. The Hawkeyes did not surrender many extra strokes on par 5s. They averaged a solid 5.00 strokes, not being intimidated or overwhelmed by the longer yardage.

All in all, the invitational could have been worse for the Hawkeyes, and things will likely get better. Any golfer can hit the ball better or worse on any given day.

Next, women’s golf will turn its focus to the Mercedes Benz Women’s Collegiate Championship in Knoxville, Tennessee, with three rounds occurring Sept. 17-18.