Iowa’s offense could be a problem if the consistency doesn’t start to manifest itself against Northern Iowa this weekend. 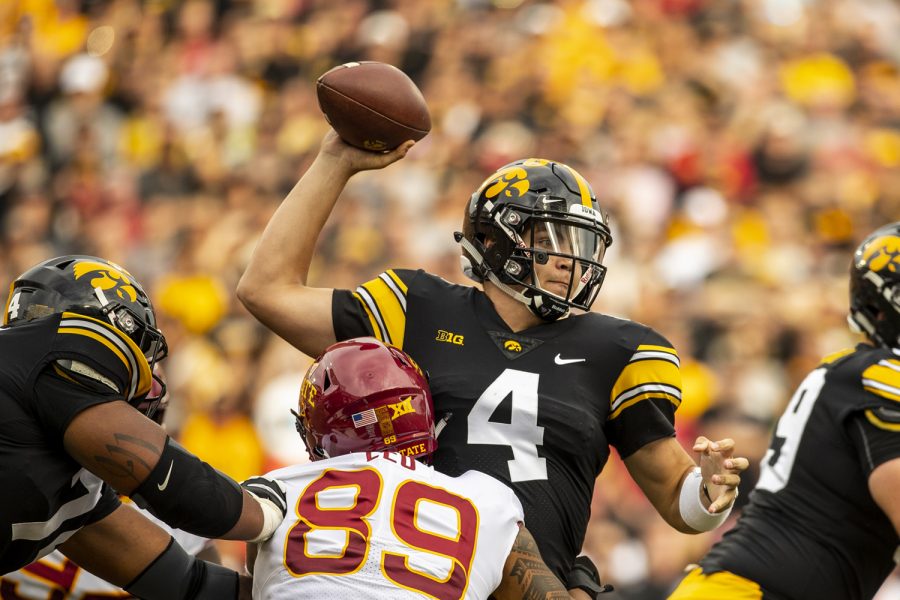 Iowa is gearing up for its second in-state rival in as many weeks with the realization that Northern Iowa won’t be an easy opponent.

With offensive struggles in the past two weeks, there’s a strong focus on righting that ship — especially with Wisconsin peeking over the horizon.

The defensive line continued its strong dominance from Week 1 into Iowa State, and that doesn’t seem as if it will change anytime soon. However, you can’t win games without scoring some points, and that’s a big concern.

“Offensively, we still have work to do in terms of timing and tempo, developing a rhythm, but that’s just going to come from practicing and good execution in practice,” head coach Kirk Ferentz said.

After numerous punts against Iowa State and a lack of offense in general, things got pretty frustrating for quarterback Nate Stanley and the receivers.

An overreaching attempt to aim the ball comes with that frustration, which, Ferentz said, paired with a lack of sync in the offense creates problems. By continuing those repetitions, the confidence will come.

“We need to figure out what’s going on,” tight end T.J. Hockenson said. “Obviously, we’re inconsistent, and that’s been our whole focus this week is being more consistent and trying to figure out the spacing in routes, trying to expand the defense, trying to convert when we need to.”

The running game has been a strong point on offense for the Hawkeyes. Ihmir Smith-Marsette and Ivory Kelly-Martin could return for Northern Iowa but are both day-to-day after being injured in the first two weeks. Neither of them have returned to practice, but Smith-Marsette is listed as a backup on the depth chart for this weekend.

Northern Iowa is an opponent for Iowa that on the road could do some damage.

The last three meetings for the two teams — 2009, 2012, and 2014 — have been close, but playing in this in-state rivalry game brings implications similar to playing Iowa State.

It’s not expected to be an easy game, and despite Wisconsin’s coming to town the following weekend, the team’s focus is on the matchup with the Panthers.

However, that doesn’t come without its problems. Iowa only has game film for one Northern Iowa game — it didn’t play last week — and that’s unusual for a Week 3 game.

Despite that, from what the Hawkeyes have seen of Northern Iowa so far, the two offenses match up well in that they both took a little while to get started in the first game. With the way Iowa’s defense has been playing, that shouldn’t be a problem either way.

The Northern Iowa coaching staff has solidified its team as one that consistently competes in the Football Championship Subdivision.