The UI fell seven spots to No. 38 in the 2019 U.S. News rankings, and officials suggest the lack of state support is behind the decline. 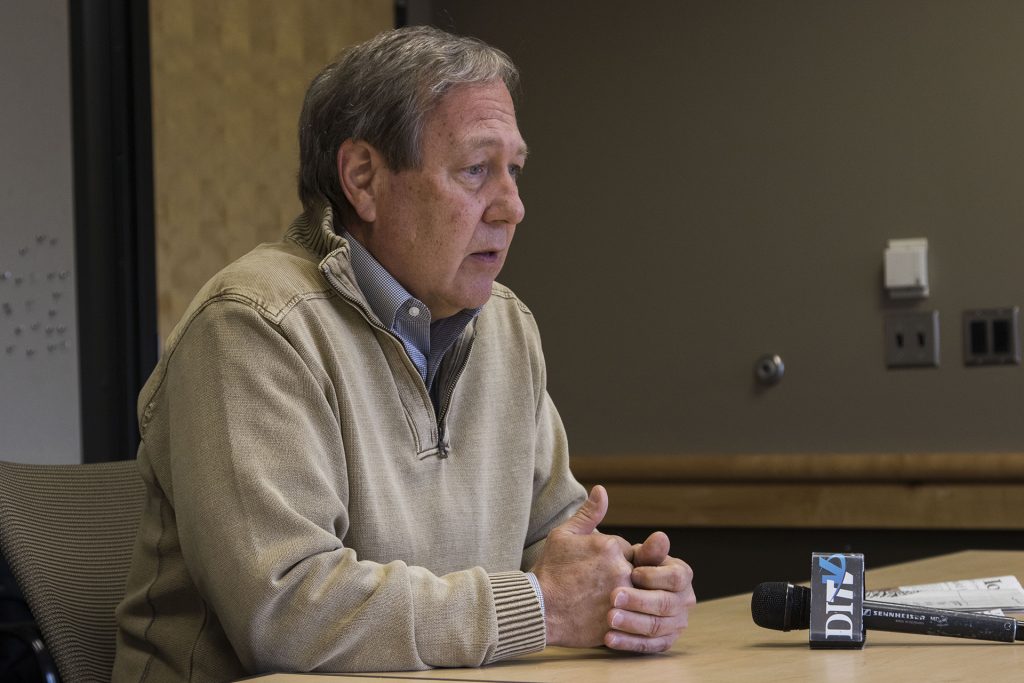 UI President Bruce Harreld speaks in an interview with The Daily Iowan in Adler Journalism Building on Wednesday, March 7, 2018.

The University of Iowa’s standing relative to its peer institutions as shown in U.S. News & World Report rankings will continue to slip without sufficient state funding, UI President Bruce Harreld has repeatedly told a variety of stakeholders.

The 2019 “Best Colleges” rankings released Monday show just that — a slide for the UI, with the school coming in at No. 38 — down seven spots from last year.

This decline follows a slight bump in the rankings on the 2018 list for public universities from No. 33 to No. 31.

UI officials suggest the slip in the rankings comes as no surprise given “generational disinvestment” — the trend of dwindling state support — in higher education.

Budget cuts to the state Board of Regents amounted to about $35 million in the last two budget years alone.

It’s not the first time Harreld has warned of the results of slashing higher-education funding. Harreld, when speaking with legislators in February, forecasted the institution’s drop in the rankings as seven of its 10 peer institutions had seen a boost in state support and improved outcomes.

Harreld has called for consistent tuition increases arguing that the UI needs to aggressively hike its price to compensate for the lack of state funding and remain competitive with its 10-university peer group.

The regents voted in June to hike tuition at varying rates for students across its three universities.

“The US News rankings are a stark illustration of what happens when there’s not enough investment by the state in higher education, which will necessitate additional investments by students and their families,” Harreld said in a statement to The Daily Iowan. “Continuing the generational disinvestment will result in further reductions in outcomes for students and the university.”

The drop in rankings can in part be explained by the fact that the methodology for calculating U.S. News rankings changed this year.

The Des Moines Register reported that “of the 796 Pell recipients who began attending UI in fall 2011, 63 percent had graduated six years later. The six-year graduation rate for the fall 2010 class was 58 percent and for the fall 2009, 68 percent.”

Additionally, the methodology now gives more weight to outcomes — up to 35 percent this year from 30 percent in 2018.

Certain statistics show the UI is improving, though not as rapidly as its peers.

Certain statistics show the UI is improving, though not as rapidly as its peers. For example, its six-year graduation rate increased from 72 percent to 74 percent in this year’s list — lower than the peer average of 83 percent. The average first-year retention rate remained at 86 percent.

Research shows universities see better outcomes for students when they have access to quality instructors, according to U.S. News & World Report. That’s where the faculty resources come in — UI officials suggest the UI cannot keep up with its peers on student success programs despite improving faculty salaries. Only the University of Michigan and UCLA rank higher than the UI in the faculty resources category.

“Making student outcomes our spending priority is exactly the right thing to do, and illustrates the fiscal discipline at the university,” UI Interim Provost Sue Curry said in a statement.