Daniel Soto has made his mark in races and Iowa record books, as the leading harrier has begins his last year as a Hawkeye. 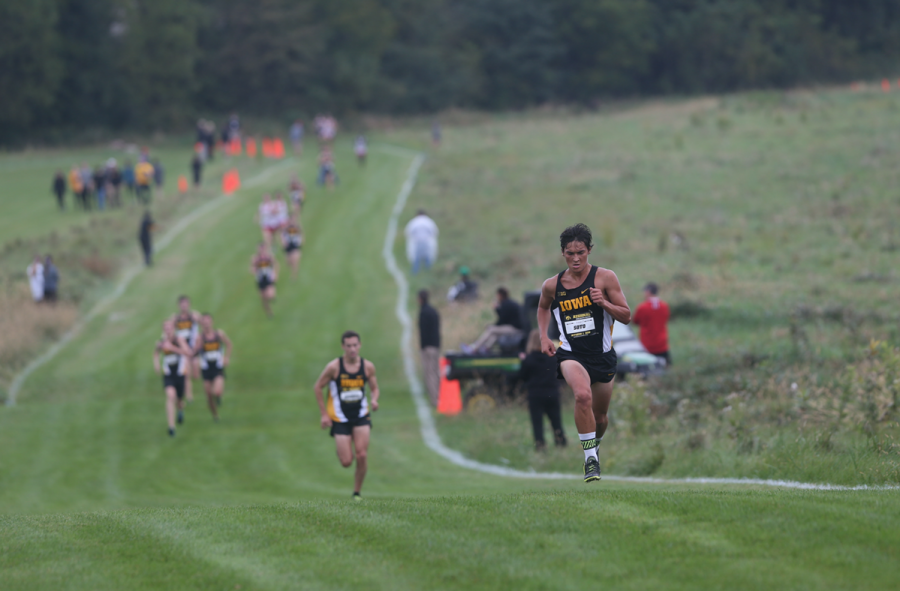 The Iowa cross-country men are running with an upperclassmen-heavy roster this season. Five seniors have stepped into the leadership role, Daniel Soto being one of them.

The harrier from West Des Moines began his journey to Division-1 cross-country years ago with a simple suggestion from his father to join the high-school cross-country team.

“I was absolutely terrible,” the West Des Moines Valley alum said. “My first race, I think I faked an injury, and I was one of the slowest guys on the team. It was a total disaster.”

Soto continued to run, and by the end of his high-school career, he was decorated with titles and achievements, something he never had expected. He left high school for the Hawkeyes in pursuit of competition and success.

Soto has experienced that success, especially during the 2017 season. He finished in the top 25 for three of the four regular-season meets, ran the men’s 8,000 meters in 25:04 at the Big Ten meet, and the men’s 10,000 meters in 30:04 at the NCAA regional. Soto’s regional time was a college best that ranks third in Iowa’s All-Time Top-10 Performers.

“He’s been through enough years now that he has had highs and lows,” head coach Randy Hasenbank said. “He has now established himself as one of our more consistent guys.”

Soto has started the 2018 season strong as Iowa’s top finisher for the men’s 6,000 meters at the Hawkeye Invitational on Aug. 31. The senior Hawkeye is now facing his final shot to continue his legacy.

“We have one last go-around,” Soto said. “We’re going to go out there and see what we can do.”

With the first meet of the season under his belt, he embraces a balanced mindset of patience and intensity.

“You don’t want to get all jacked up and run yourself into the ground super early in the season and then not have anything when it counts later,” he said. “At the same time, I think there is a longer leash with me and the other seniors to be a little bit riskier with our training because it’s our last season.”

Hasenbank saw the control and steadiness from Soto and the seniors during the Hawkeye Invitational, and he will expect that level of leadership to continue.

“They’ve become an extension of the coach to help reinforce the expectations,” Hasenbank said. “[Soto] has gotten to that point where he is good at that and can get the guys together after a race and say, ‘Hey that was good, but here is what we need to focus on to get ready for the next race.’ ”

With the demands of a college athlete, Soto has practiced a piece of advice that has sustained his love for the sport.

“My dad told me this: Make sure you are able to find the balance in your life so that you don’t make your sport a job,” he said. “It’s high stress, high intensity, and any mistake is scrutinized not only by your coaches and your teammates but the public. The sport you grew up loving can stop being enjoyable.”