Coralville hosts public forum for local candidates in upcoming elections to hear from the public. 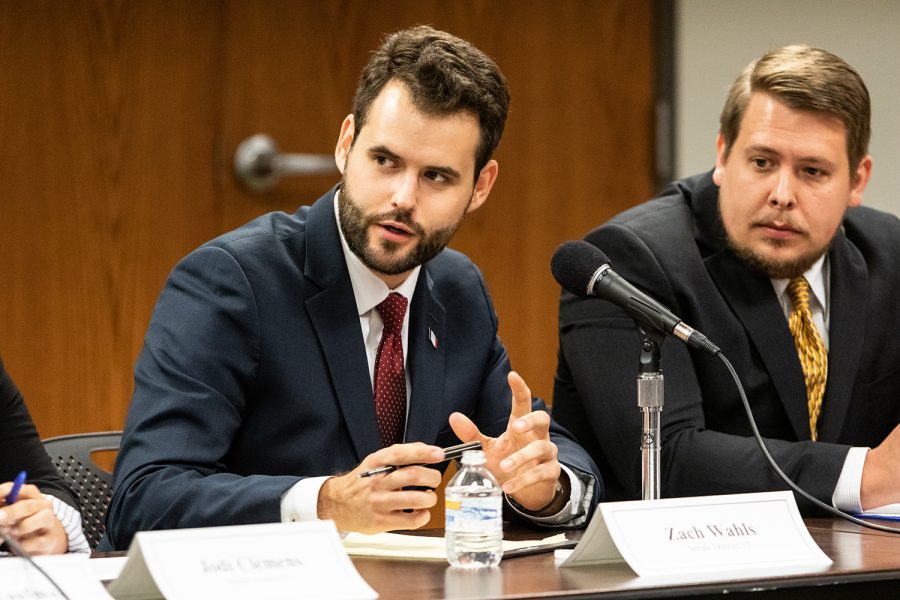 Zack Wahls, the Democratic candidate for Iowa State Senate District 37, participates in a public forum at the Coralville Public Library on Monday, Sept. 10, 2018.

One of the first questions in the forum concerned the reported refusal of Medicaid company payments for items such as wheelchairs, shower stools, and nutritional supplements, and how the candidates would address the issue.

Kevin Kinney, the four-year Democratic incumbent for Senate District 39, criticized the 2015 decision to shift the responsibility for the state’s Medicaid system to private managed-care organizations.

He specifically talked about one of his constituents, who he described as a young man who was employed, but unable to travel to and from his job without the help of a mechanical wheelchair, for which he was denied coverage under care of the private companies.

“I have a number of constituents who reach out to me on a weekly basis that are being denied the critical care devices which they need and we need to have governmental legislative oversight,” Kinney said.

Kinney’s opponent, Republican candidate Heather Hora, was not in attendance at the forum.

Patrick Wronkiewicz, a University of Iowa student and Republican challenger to incumbent Joe Bolkcom’s Senate District 39 seat, said he thought Iowa’s current model for privatized healthcare was pushed too fast without fully considering the consequences. However, he said if elected, he would not push to return to state-run Medicaid.

“This was going to bankrupt our state,” Wronkiewicz said. “Going back to the way it was was unsustainable.”

Bolkcom said the decision to privatize Medicaid after models seen in such states as Kansas was made unilaterally without the consent of the Legislature.

“Medicaid is there for all should you suffer a catastrophic disability or injury; it’s your safety net,” Bolkcom said.

Libertarian candidate for Senate District 37 Carl Krambeck said he would be open to bringing back state-run care for groups like the elderly and the long-term disabled as private companies would not be able to profit off of providing them care. He called the current privatized system “crony capitalism.”

On workers’ rights, the candidates concurred they would lessen the restrictions on collective-bargaining rights in the public sector.

For Democratic candidate for House District 73 Jodi Clemens, the changes to collective bargaining law is one of her principal reasons for running. She called the decision one-sided and said she would support restoring collective-bargaining rights.

“I watched hundreds of my fellow community members show up at forums arguing against this bill, teachers pleading for their collective bargaining rights, and they pushed it through anyway,” Clemons said.

Nearly across the board, candidates condemned recent budget cuts to state schools like the UI and Iowa State University.

In the last two budget years, the state Board of Regents has seen funding cut by about $35 million.

Wahls said the state Legislature should stop their mid-year cuts to the UI and ISU. He called funding the universities and public school systems a benefit to the workforce.

“I think it’s very important that we have the best workers in the Midwest, and that starts with a strong investment in our K-12,” Wahls said.

Wronkiewicz said university funding and tuition is the top issue of the district, and that he disagreed with the budget cuts.