The UI’s chapter of the American Society of Mechanical Engineers is recruiting members of all majors and interests to build the school’s first competition-ready solar car. 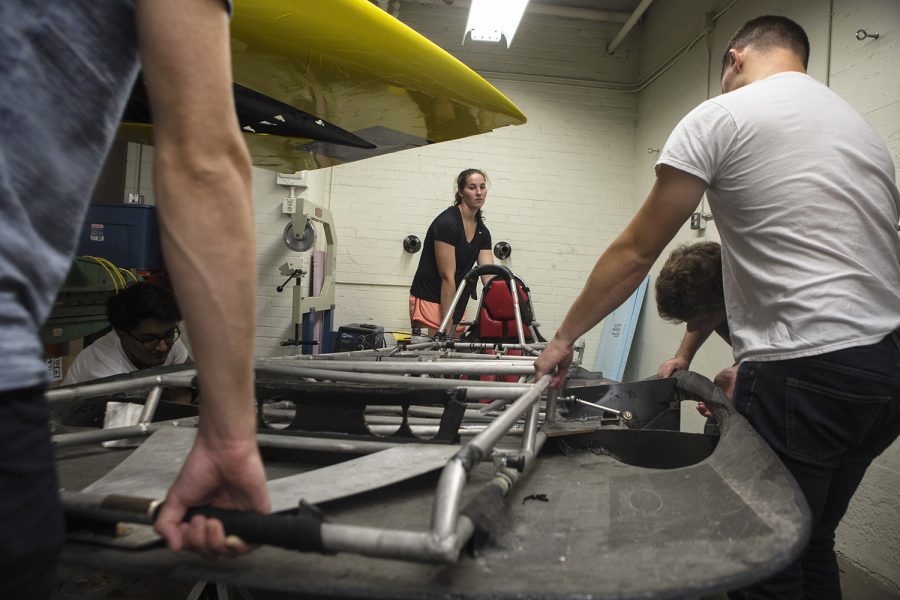 ASME Vice President Sam McElwain (left) and senior Adam Wilkinson (right) work on the car during the ASME Solar Car meeting in the Chemistry Building on Sept. 4, 2018. ASME Solar Car Team is building the University's first competition solar car, which the club will continue to work on throughout this year.

A team of mechanical-engineering students met Tuesday night to invite University of Iowa students of all majors to join in building the school’s first competition solar car.

The UI chapter of the American Society of Mechanical Engineers took on the Solar Car Challenge in 2017 and aims to complete the project in six months.

The team has 30 active members, and those members would like to raise — potentially even double — their numbers with participants of all interests to finish the project.

At the meeting, UI electrical engineering student Shane Trautsch said the project is on schedule. Solar panels will be implemented soon, and the team seeks artists for the car’s design.

“We just ordered 600 solar cells from SunPower, the lead manufacturers in solar-cell technology right now,” he said. “We’re currently working with Assistant Professor Fatima Toor [on the solar car], and we’re really happy to have her on board.”

Although the chapter was unable to compete in the 2018 American Solar Challenge this past summer because the car was incomplete, the team has high hopes for the project’s future, according to the UI Mechanical and Industrial Engineering website.

Chapter Vice President Sam McElwain said the UI team plans to build a solar car completely on its own by 2020 to compete in the challenge.

Once completed, the team members plan to test-drive and showcase their current vehicle through Iowa’s 99 counties in the next six months, Wallingford said. They plan on visiting high schools, museums, and donors and followers of their progress to promote participation in STEM fields, especially for future generations.

The car, while requiring thousands of dollars in fundraising and plenty of people to complete, also allows students from a variety of areas to work together in a professional group setting while applying their skills and interests.

Students interested in electrical and mechanical engineering, finance, business, art, computer science, journalism, and dozens of other fields are all necessary to raise funds, promote, buy materials, and write updates on the team’s progress.

“Our club has so many different pieces, and it’s such a big project, so it’s a great idea to bring in other majors,” McElwain said.

In addition to finishing and racing the vehicle in the future, the club’s goals are to promote student growth. Wallingford said the project gives engineers and other majors the opportunity to get hands-on experience and apply what they learn in class.

The project allows members to develop networking with peers, professors, and companies, and provides an ideal opportunity to promote STEM and environmental sustainability, he said.

“We’re hoping that through our organization, we’ll be able to speak to schools and, hopefully, do demonstrations to get kids more passionate and enthusiastic about STEM fields,” Wallingford said.