Daily Iowan Pregame Editor Adam Hensley caught up with Hawkeye running back Ivory Kelly-Martin to grill him on some of life’s toughest questions, such as his favorite fast-food joint. 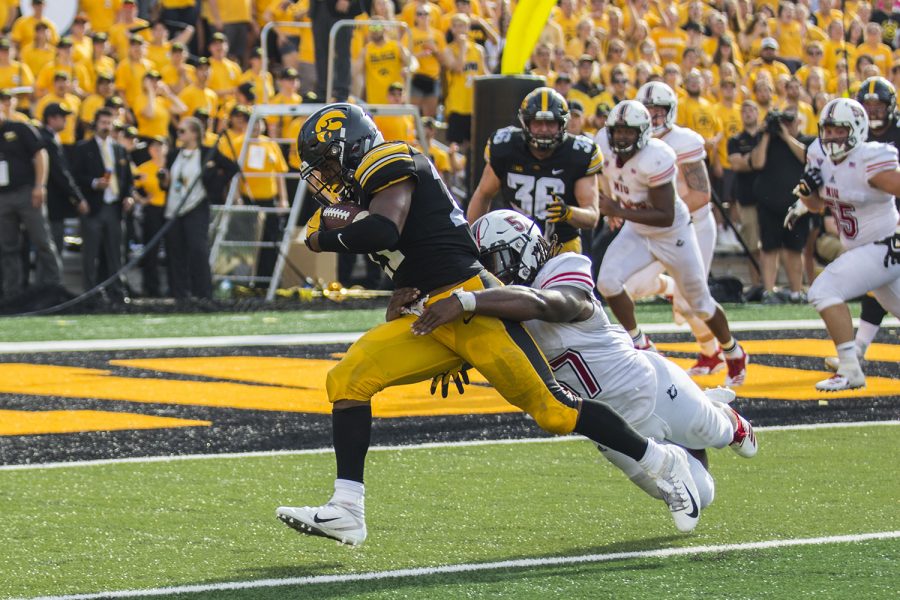 Iowa's Ivory Kelly-Martin sheds a tackle from NIU's Kyle Pugh during the Iowa/NIU football game at Kinnick Stadium on Saturday, Sept. 1, 2018. The Hawkeyes defeated the Huskies, 33-7.

Daily Iowan: If someone hands you the AUX, who do you play?

Ivory Kelly-Martin: I’m really big into rap. Chief Keef is my go-to, no matter what time of day it is.

DI: Who is the most overrated person in the music industry?

Kelly-Martin: That’s a hard one for me. To be honest, all I listen to is basically Chief Keef, day in and day out.

DI: What do you like to binge-watch on Netflix?

Kelly-Martin: “The Office.” I’ve probably watched it seven times through. Whenever I get bored, I’ll pop that bad boy on.

DI: Who’s your favorite character on “The Office”?

Kelly-Martin: Definitely Michael, without a doubt. He’s the head over everything. He never stops having fun, and every single thing he says, I can never not laugh.

DI: If you won the lottery, what’s the first thing you’d buy?

Kelly-Martin: To be honest, it would probably have to be a car. Cadillac Escalade, my favorite thing in the world.

DI: Who’s the fastest on the team?

Kelly-Martin: It’s all about confidence, so to be honest, I’m going to go ahead and say myself.

DI: Are there any NFL players you model your game after?

Kelly-Martin: One of the biggest guys I try to model my game on is Marshall Faulk. He’s my all-time favorite running back, and his versatility on the football field is something I want to be able to do when I’m on the field.

DI: If you couldn’t play football, what sport would you play?

Kelly-Martin: Probably soccer. I’ve never played soccer. I just love to watch it; I love to play it just for fun.

Kelly-Martin: Got to be Chick-fil-A. It’s amazing.

DI: If you could have dinner with any person in history, who would it be?

Kelly-Martin: It’s probably got to be Barack Obama. I just want to hear him talk. I’d love to have any type of conversation with him, whether it’s favorite food or whatever.