A tattoo virgin walks into a tattoo parlor

Daily Iowan Arts reporter Philip Runia reflects on the excitement and anxiety of getting his first tattoo. 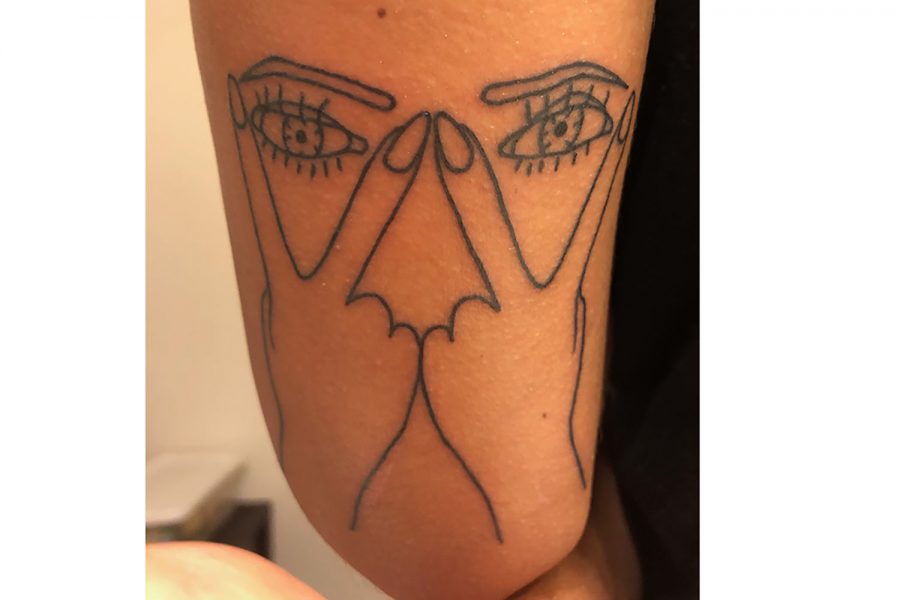 A sexy mermaid. Several Tigerhawks. A seaman holding an unlit cigarette. I don’t belong here. My virgin skin, unpierced and bare, has no right to set foot inside.

I’m 21 years old. I should’ve gotten a tattoo when I turned 18. Perhaps I should have had a drink before coming; I heard somewhere that helps.

My brilliant hand can’t get the pen to work. A signature and I’m really doing this.

Thoughts have been circulating in my mind for months about what I should get. The design isn’t Jackie’s style, but Sarah likes it. Andrea was going to draw an original design for me. I think she forgot, but it’s pointless to remind her if I haven’t made up my mind yet. Mom didn’t approve of my sister’s tattoo. She just got a second one.

Old School Jeff, my tattoo artist, doesn’t think the white ink will work. The eventual yellow won’t look good on me, regardless of my skin pigment. His experience is evident. I think I saw a book on the counter called Jeff’s Work or something similar. I try not to sound like an idiot, again but am too late.

“I saw this woman come into my workplace with a shirt on that looked cool.”

The tattoo will be black. Jeff makes the prints, and it fits perfectly on the back of my arm (not that I can see). Sarah likes it. I turn from the mermaid and the seaman with the cigarette to the back room.

It’s bigger than I thought. Along the wall there is another mermaid and another man with a cigarette; they’re siblings, not twins (like eyebrows should be). Jeff showed me filled in brows and line work for the design. I still haven’t made up my mind, but we’ll start with line work.

I’ll have to lie down on the saran-wrapped examination table, but first I need a shave. While Jeff lathers my arm in shaving soap (peppermint, I think), I look around the room. While the mermaid and the man take center stage, designs reminiscent of Ancient China, distortions of Disney, and pinup models fill my line of sight.

The razor was clean, and my skin is smooth. More fluid is applied, this time antiseptic. It stinks of clean, although I’m grateful for the sanitary measure. Jeff checks the needle, too. After the print is applied from a paper not unlike those tattoos you get when you’re a kid at the fair, we make sure it’s even. Sarah likes it. I lie down on the table.

“The best thing for you to do is relax, and we can take a break if you need,” Jeff says reassuringly. “Don’t try to power through it if you’re uncomfortable.”

He tells me his stomach tattoo hurt the worst, that the torso is uncomfortable. The body is just made that way. My arm should be fine.

I’ve heard it feels like cat-scratches, I’ve heard it’s the snap of the rubber band. For Jeff, it’s an asshole poking your sunburn. It’s not too bad, so we continue. While the pain fluctuates, it’s worst point is not enough to incite a jerk or wish for a break.

While my palms sweat inside my white fingers, Jeff and Sarah distract me. Sarah’s man didn’t snap back; her sister was forced to get blood drawn by her mom. Distracting myself, I reply instantly and often. “That’s evil,” Jeff says.

Coffee is expensive sometimes because it’s brewed after being digested by felines, pirates still exist, and they steal coffee sometimes, and there is a brand of lettuce that has the root still attached (but it’s very good on burgers and sandwiches).

Adrenaline gone (I hadn’t noticed when it kicked in), the second half stings more than the first. Up from the table, I unstick my shirt from my torso and wipe my hands on my pants. Jeff likes Beyoncé and supports theme tattoos. The brows aren’t filled in, but after it heals, I can color it in with marker and see if I like it enough to get a touchup.

Jeff is a good businessman. I almost want another tattoo, but the stinging on my arm shuts me up. While Jeff explains the directions, I check out my newly tatted arm in the floor-length mirror opposite his table. I like it.

After getting moisturized and wrapped, I might have to Google the aftercare, but I remember something about unscented lotion. I pay and tip well because Jeff was nice, “the epitome of ‘tough love.’ ” Jeff hands me a pamphlet for aftercare, reading my mind.

It stings, but I’ll be back. Probably.