Field-hockey players’ reach turns out to be global

Seven of the 21 Iowa field-hockey players are thousands of miles away from the place they call home. 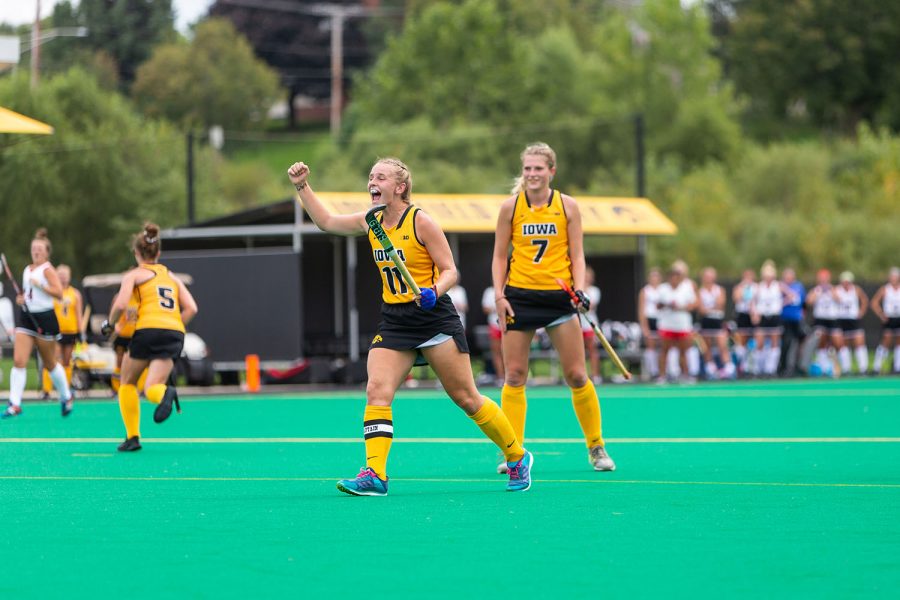 Iowa's Katie Birch celebrates as Iowa scores during a game against Ball State on Sunday, Sep. 2, 2018. The Hawkeyes defeated the Cardinals 7–1.

Some of Iowa field hockey’s most influential players have come from around the world to experience the Hawkeye lifestyle.

Going to a different country to attend school and compete in a college sport is a big decision, but one that has numerous reasons behind it.

“I chose to go to Iowa because of the family feeling I felt when I was talking to the coaches, and they also really help push the students to do our best on and off the field,” said Brown, a native of Christchurch, New Zealand. The Hawkeye atmosphere draws in athletes from  All over the globe and craetes a unique opportunity. “The facilities and the support given to a student-athlete out here are like nothing given at home, something I couldn’t miss,” said Sunderland, originally from Ipswich, England.

Murphy’s hometown of Riana, Tasmania, is the farthest from Grant Field, with the distance sitting at around 9,500 miles. She agreed with Sunderland about the support provided for Hawkeye athletes.

“Probably the biggest difference between Iowa and where I’m from is the ability to do school and a sport at the same time and really try your hardest at both,” Murphy said. “Back home, you choose one or the other, and it’s a bit unfortunate, but here, you have so many opportunities and access to so many things, which is really nice.”

“[There are] a lot more cornfields, [it’s a] much smaller town, you get a lot closer with the people here,” she said.

When you live 40 minutes from home, it’s easy to go back and sleep in your bed if you miss it, but living across oceans makes it much more difficult to reach the things you miss most while at college.

“[I miss my] family,” said Birch, who moved here from York, England. “I am really close with them, so I miss seeing them every day, but I talk to them pretty much every day.”

Coming from different parts of the world, each woman brings her unique lingo, similar to how the common Midwesterner uses the term “Ope.”

“Usually to say thank you, I say cheers, and everyone thinks that’s really weird, but everyone is starting to say it now, which is awesome,” Murphy said.

Other lingo on the field-hockey team includes “sunshine” from Birch. Holley says “I reckon” as a way of saying “I think I will.” Stribos, from Brussels, never uses the word “yes”; instead, she says “ja,” “yes” in Dutch.

Despite these minor language differences, Murphy said making the move from Australia didn’t feel that different.

“I think it was pretty easy to adjust coming from so far away,” Murphy said. “Everyone was so welcoming, not just the team, but my professors and the school community as well as parents. Everyone was really welcoming so it didn’t really feel like much of a change.”

The seven women make up an integral part of the field-hockey team. The Hawkeyes are 3-1 so far and recently moved up in the rankings from 20th to 14th.