The state Board of Regents seeks a $20 million increase in funding for fiscal 2020, with $18 million dedicated to resident undergraduate financial aid. 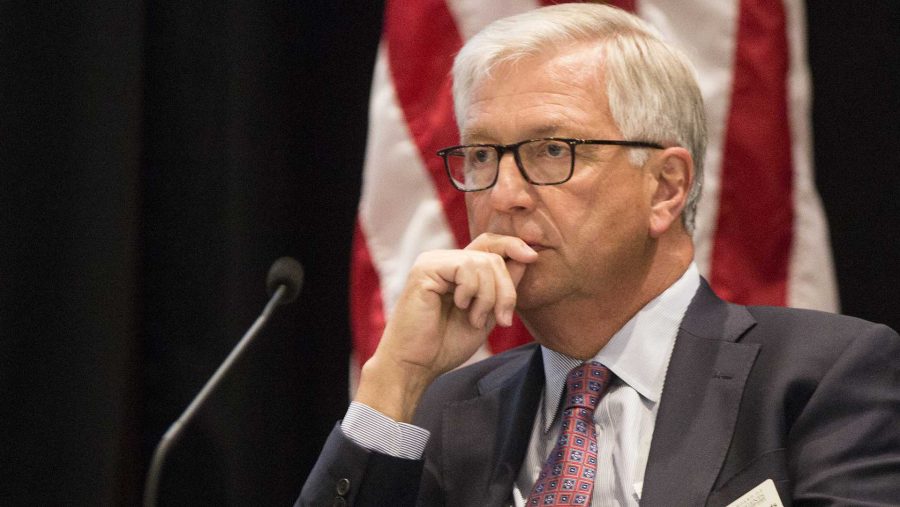 After the state has consistently cut back its financial support to the public universities governed by the state Board of Regents, taking back about $35 million in support in the last two budget years alone, the regents unveiled their proposal on Tuesday to request $628.42 million — a boost of $20 million — in state support for fiscal 2020.

The regents vowed that the appropriations request, if funded, would be dedicated to resident undergraduate financial aid as they promised last fiscal year when they requested an increase of $12 million in appropriations for that purpose.

“When comparing states by the percent of need-based aid awarded to students at public institutions, Iowa is last in the country,” regents’ documents note. “Moving up one spot would require more than $20 million dedicated to the students attending Iowa’s public universities.”

The request includes $499 million to go toward the regent universities’ general funds — an increase of $18 million above the current fiscal year. The other nearly $130 million would fund Iowa’s special schools, economic development efforts, and other special units and programs.

Requests for a bump in support have been consistent even as state appropriations to the regents has declined — the regents, at least in recent years, have not seen their requests fully funded and lawmakers have at times made cuts in the middle of the current fiscal year.

Part of that decline in support has stemmed from midyear budget cuts in the last two years. Gov. Kim Reynolds in March signed off on midyear cuts to the regent universities’ fiscal 2018 budgets amounting to $10.9 million. The cuts were split about evenly between the University of Iowa and Iowa State University and excluded the University of Northern Iowa.

The UI’s $5.4 million share of the cut was partially offset by an appropriations increase of $3.15 million in fiscal 2019, meaning the increase in support restored some of the fiscal 2018 funds that were cut in March but did not provide new money.

To grapple with the rounds of midyear cuts, the UI has eliminated certain non-need or merit-based scholarship programs, halted campus construction on buildings in the design phase until Sept. 12, and announced plans to close centers and institutes without significantly disrupting the UI’s academic mission.

Students attending the three universities have also seen consistent tuition increases, which regents and university officials across the institutions have generally attributed to dwindling state support. In June, the regents approved tuition hikes at or below 4 percent for the 2018-19 academic year with varying rates for resident and nonresident undergraduate and graduate students.

UI President Bruce Harreld told The Daily Iowan in May the tuition revenue from these tuition increases is in part passed onto students in the form of financial aid, which administrators have said is a priority to help those who may be especially burdened by tuition increases.

Assuming the state continues to take back support for higher education, Harreld said aside from tuition revenue, the UI can also examine other revenue streams and philanthropy to make up for the disinvestment.

“And I think the mistake we will make, we have a tendency to take something as complex as our overall fiscal model, money model, and we actually say, ‘What’s the one thing? We have to get it all out of the state or all out of tuition,’” he said. “No, we need to do all of those…’”

Regent President Mike Richards has previously said the regents plan to consider tuition rate increases on a five-year or so timetable to make it easier for students and families to plan their finances, even with unpredictable state support.

The regents will vote on the fiscal 2020 appropriations request at its Sept. 13 meeting in the IMU.