Ten-year-old Gwen White likes sports, Kirk Ferentz, and Herky. Despite being diagnosed with juvenile dermatomyositis, she is all smiles. Today, she is in full remission. 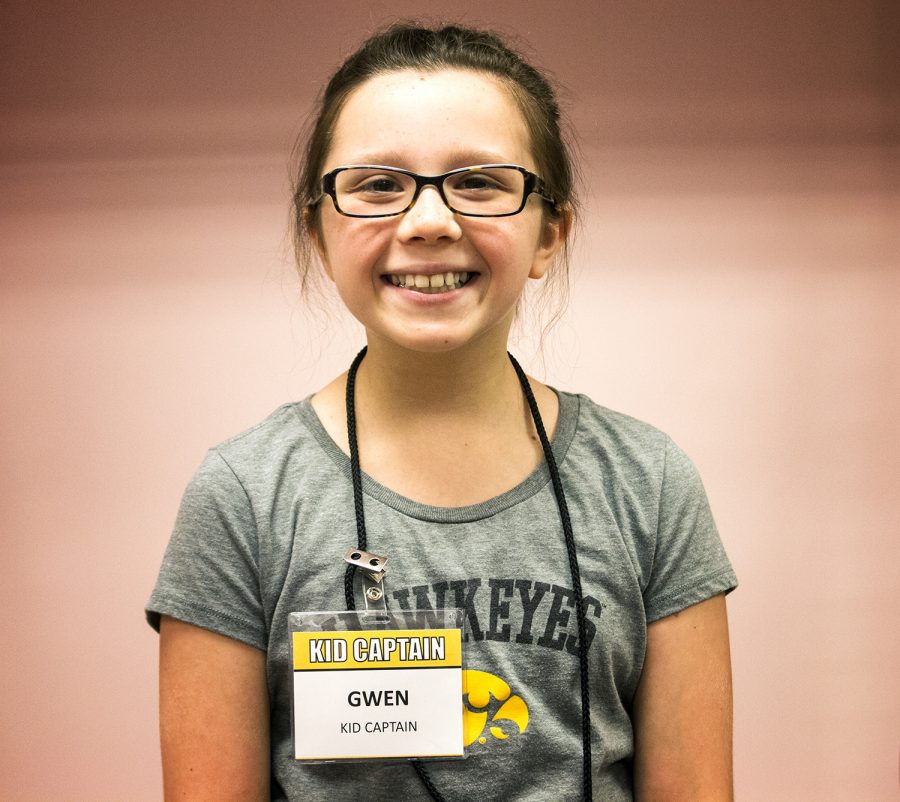 Kid Captain Gwen White smiles for a portrait during Iowa Football Kid's Day at Kinnick Stadium on Saturday, Aug. 11, 2018. The 2018 Kid Captains met the Iowa football team and participated in a behind-the-scenes tour of Kinnick Stadium. Gwen's story will be featured during Iowa's first home game on Saturday.

As Kirk and Company return to Kinnick Stadium on Saturday, the Kid Captain program takes to the field once again as well for the start of the program’s 10th-anniversary year.

Kid Captain is a partnership program between the University of Iowa Stead Family Children’s Hospital and the Hawkeye Athletics Department that helps share pediatric patients’ stories. The program started in 2009.

The first Kid Captain of the season is 10-year-old Gwen White of West Burlington, Iowa. Gwen was diagnosed with juvenile dermatomyositis, a disease affecting 3 out of 1 million children every year.

Oddly enough, Gwen is one of three children in her town who have the disease. But getting officially diagnosed with the disease was more complicated than Gwen and her family had hope for, Gwen’s mother, Kerstin Quattromini said.

Gwen’s journey started in 2016 when she started to become increasingly immobile.

“She was super tired and weak,” Quattromini said. “She had a rash on her hands and elbows, and we kept going back to the pediatrician.”

Gwen then went through numerous creams to try to cure what doctors thought was eczema, but her condition kept worsening. Her gym teacher told Quattromini that Gwen wasn’t participating in class because she was too tired.

Then, one day, Gwen jumped down some stairs in her home and hurt her ankle. After some X-rays, doctors said she had a small fracture, and she was put in a boot for eight weeks. Quattromini said Gwen’s rash persisted after the boot came off, and she didn’t quite bounce back.

“We noticed little things — she couldn’t get out of bed or lift herself up,” she said. “We were like, ‘Well, maybe something else is going on.’ ”

After a couple visits to a dermatologist about the rash in March 2017, the dermatologist decided to do a skin biopsy. Quattromini said it was painful, but Gwen wanted to know what was wrong, so she endured it.

Once the results came back from the Mayo Clinic, Quattromini said, she received a call telling her to immediately go to the UI Stead Family Children’s Hospital.

“Getting the news was hard,” she said. “I went to the school, and scooped up Gwen, and explained to her what was going on and that she would have to start aggressive treatment, but in my head, I didn’t really know what that meant.”

UI pediatrics Assistant Professor Scott Lieberman, Gwen’s physician, said the 10-year-old is an amazing young person who has dealt with a lot at the Children’s Hospital but maintains a positive attitude.

“She always has a smile on at her visits,” he said. “She always comes prepared with thoughtful questions about symptoms or medications. I am impressed by how much she takes charge of her overall health and medical experience. I am very happy she has the honor of being a Kid Captain.”

After Gwen’s initial treatment, which included a lot of physical therapy because of the weakened muscles, Quattromini said Gwen’s treatment now consists of monthly infusions and 13 pills a day.

“At first, it was super scary, and I was really nervous, but after a while, I settled down, and then it got easier,” Gwen said.

Quattromini said the doctors and nurses were all amazing, and right now, Gwen said, she feels great and is in medical remission — so her disease is not currently active.

Now, Gwen enjoys playing sports in her backyard and has taken an interest in band at school.

Quattromini said Gwen is excited about the Hawkeye game, and while they were visiting the hospital earlier this week for an infusion, Gwen wanted to take a picture next to a Kid Captain sign with her picture on it.

Gwen, who is a fan of head football coach Kirk Ferentz and Herky the Hawk, said she looks forward to being on the field Saturday.

“I think it will be really fun to do The Wave on the field,” she said.

When asked if she knows what she wants to be when she grows up, she had a quick and confident answer.

“I want to be a [physician’s assistant],” she said. “I want to go to the University of Iowa.”