Due to budget cuts, the UI announced the closing of the UI Labor Center in July. Concerned Iowans have organized and spoken out. 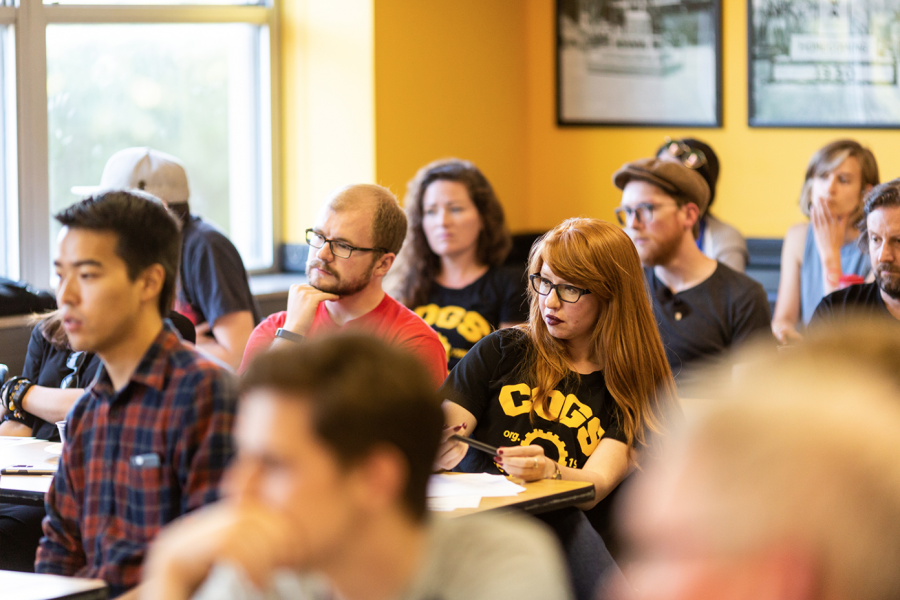 Ashley Dorn, a history graduate student and TA listens to a speaker at a meeting to discuss how to save the UI Labor Center at the IMU on Wednesday, Aug., 29, 2018.

Concern has sparked over the University of Iowa’s proposed closing of the Labor Center, the only organization of its kind among the three public universities governed by the state Board of Regents.

On July 10, the UI announced it will cut funds to seven organizations on campus, including the Labor Center,  UI Center on Aging, the Mobile Museum, the Confucius Institute, among others.

According to a July statement from the UI, deans and vice presidents provided input on the decisions regarding which centers to close, and Harreld and the interim provost made the final call based on those recommendations.

“We’re disappointed to be in this position because these centers and employees provide valuable outreach and service to Iowans,” Harreld said in the statement. “But we can no longer ask our students to support activities previously supported by the state just a generation ago.”

In response to the university’s announcement, there has been a wave of action. Sherer said she has seen a huge response from students, faculty, continuing-education students, and workers around the state.

“One of the things people were very upset about when this announcement came out was that nobody had been consulted,” she said. “Nobody who was directly involved with the center or who had been through the center’s education program had been asked to give any input or even give information on the impact.”

A series of public hearings supporting the Labor Center have been hosted across the state, and Sherer said hundreds of people have called or emailed the UI to speak out.

“It’s a period of time where we know that we have vastly increasing inequality in our economy and workers’ rights are eroding in many ways,” Sherer said. “I think people feel like this kind of information and education is more important than ever.”

Tracy Leone, a cofounder and volunteer for the Save Our Labor Center Coalition, said the Labor Center has been essential to her years of labor-related work. Because of the center, she said, she has witnessed labor unions come together to learn about health and safety laws, rights on the job, worker-compensation laws, the Family and Medical Leave Act, among other items.

“There’s no other entity in the entire state of Iowa that provides this for working people,” Leone said. “The closure of the labor center is a real threat to an educated workforce.”

Salih said the Center for Worker Justice would not exist without the early help and education from the Labor Center. She noted that the Labor Center courses informed her of her rights.

“Where I am right now has a lot to do with the Labor Center,” she said.