Sen. McCain offered advice on the Senate floor, saying that the country needs to work together. It’s high time we heeded his advice. 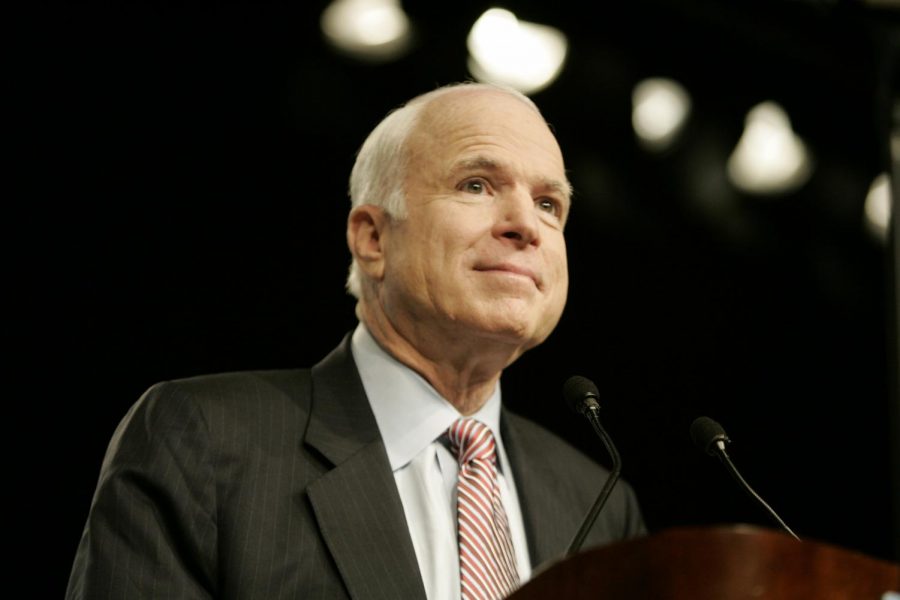 Sen. John McCain receives the applause from the audience before beginning a foreign policy address to the World Affairs Council in Los Angeles in March 2008 at the Westin Bonaventure Hotel. He talked about a collaborative foreign policy with input of allies abroad that differs from the go-it-alone approach of President Bush. (Annie Wells/Los Angeles Times/TNS)

As reported by news agencies across the United States, as well as the world, Sen. John McCain, R-Ariz., died on Aug. 25. His death sent shocks through the political system, and it has sparked the questions: What is his legacy, and what does it mean for us?

McCain spent an immense amount of time serving the United States as a member of the Navy, a surviving POW, former representative from Arizona, and six-term senator from Arizona. He also ran for president twice, once in 2000 and once in 2008. McCain ran as a Republican both times.

In an age in which being a Republican can be somewhat difficult, McCain was able to survive because of his ability to reach across party lines when he thought it was necessary. Did he have his own views that he kept close and would rarely budge on? Absolutely quite a few of his policy beliefs proved that. However, he was also an outward sign of what Republicans, and all politicians for that matter, should be: unafraid to reach across the aisle and speak the truth.

There are a few events that remain in recent memory that I can think of in which McCain reached across the aisle: the immigration bill that was put together by the so-called “Gang of Eight” a few years ago, in which McCain worked with four Democrats and three other Republicans to try to come up with a plan on comprehensive immigration reform. The bill ultimately failed in the House, but this work was an example during a changing political scene that people from opposing parties could still work together.

The second, and most recent event, that I could think of was during the health-care vote. I remember (I was watching C-SPAN at the time, like every college student does, right?) … McCain arrived as one of the last senators to vote, at around 2 in the morning D.C. time, walked up to the clerk, and extended his arm. He then stood for a moment and gave a thumbs down. He looked over at the Senate Majority Leader Mitch McConnell, turned around, and walked to his seat. Democrats in the Senate couldn’t contain themselves. What they thought was going to be a party-line vote was disrupted by a few senators, including McCain, reaching across the aisle, saying that work ALONGSIDE the Democrats needed to be done.

Did McCain sometimes vote, and speak, in a partisan manner? Certainly. All politicians have. But when it came down to it, McCain knew what was important: working together, listening to one another … trusting one another. This is advice that we MUST follow, especially now. Our country is bitterly divided, and McCain knew it. The country he loved was being split apart. He didn’t get to see the country begin working together while he was alive, but perhaps in his death, we will heed his words and begin to see our system work like it’s supposed to.