The five candidates for the Sept. 4 primary election met on Wednesday for a public forum where they discussed city issues. 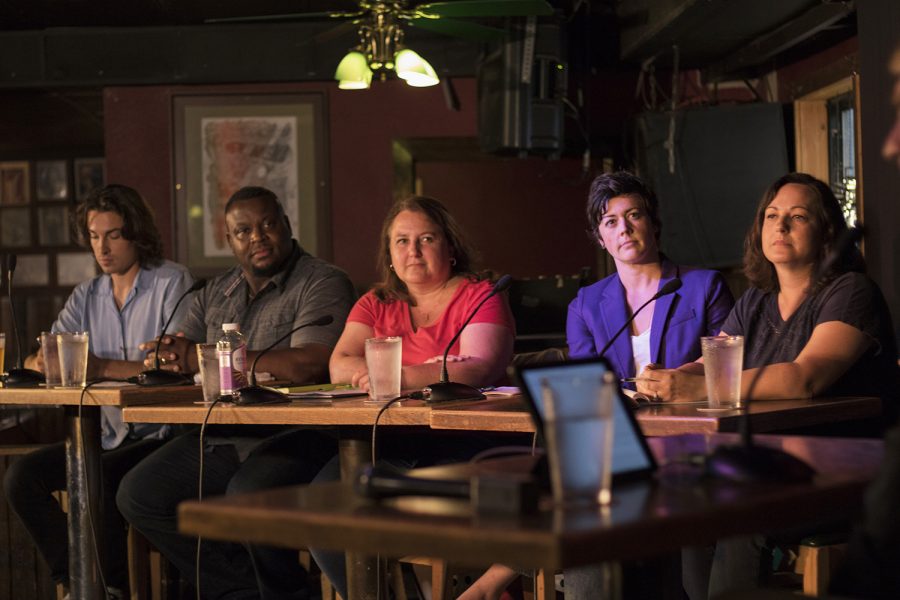 With only a week remaining before the primary election to replace former City Councilor Kingsley Botchway, the League of Women Voters of Johnson County on Wednesday hosted a forum for the five candidates to discuss issues with voters.

Ann Freerks, Ryan Hall, Christine Ralston, Bruce Teague, and Brianna Wills participated in the event at City Hall. The forum was moderated by Linda Meloy, a member of the voters’ league.

After the candidates were given time to introduce themselves, they were posed one question pertaining to affordable housing to low-income residents.

The remaining policy-related questions were taken from the audience. These included topics such as climate-action plans, historic-building preservation, small-business growth, and cooperation with the local School Board and other organizations, including other city governments.

Other questions concerned urban sprawl and protecting farmland, the first projects they would undertake if elected, minimum-wage hike, and current policies they would aim to improve.

Freerks discussed transparency in local government and said she would be a servant of Iowa City instead of putting her ideas ahead of the public’s.

“It’s not about me and my priorities at all,” she said. “What it’s about is the community’s goals and values. Part of something I would work on is making sure that everything is done out in the open, publicly, and that people are informed.”

Hall said he looks at what Iowa City residents say they need as opposed to what he believes people may need.

“You don’t want a city councilor who says, ‘This is what Iowa City really needs,’ because who are they speaking for? From their own personal standpoint or a community one?” he said.

Ralston said healthy discussion and debate are the keys to creating a better community, along with having the ability to ask questions of local experts.

“What I see is the No. 1 step is getting the perspective of the experts in a particular area,” she said. “I want to see us expanding equity and access to our community.”

If he were chosen to fill the council seat, Teague said, his priority would be affordable housing for residents.

“The thing that’s really a silent monster … in our city is the avoidance of coming up with affordable housing and human rights-related issues, such as livable wages,” he said.

Wills said one of the top reasons she ran was that she believes the community has a lot of food insecurity, which she saw in her work with the School District.

“To me, that is unacceptable … I think we can partner … with nonprofits that are doing this directly, because I’m all for work smarter, not harder,” she said.

Botchway resigned after his re-election in November 2017 to take a position with the Waterloo School Board. On Aug. 3, the City Council voted unanimously to hold a special election instead of simply appointing a new councilor.

The two candidates receiving the most votes will compete for the seat on the council, which will expire at the end of 2021. The primary will be held on Sept. 4, and the special election will be held on Oct. 2.