The Pentagon has released a report detailing an increase in Chinese military power, noting that the Chinese could potentially target U.S. allies in the Pacific. Iowa political experts say that this should not be a concern for international students on campus. 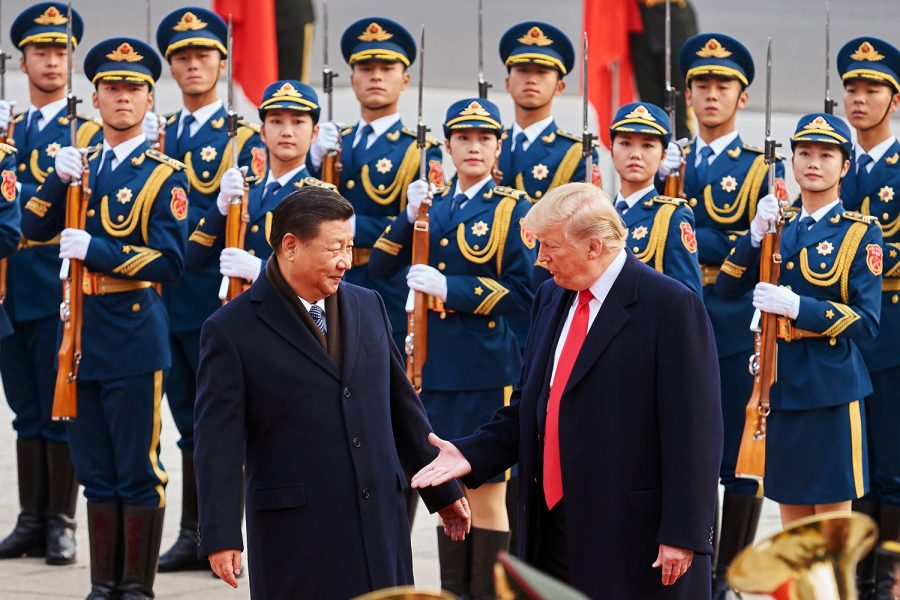 From left, China's President Xi Jinping and U.S. President Donald Trump shake hands on Nov. 9, 2017, during a meeting outside the Great Hall of the People in Beijing. (Artyom Ivanov/Tass/Abaca Press/TNS)

Trade tensions between the U.S. and China have affected Iowa products in the last several months, but Iowa political experts say it’s unrelated to a Pentagon report detailing a spike in Chinese military power. The report contended that this could be a potential threat to U.S. allies in the Pacific.

Drake University law Professor Anthony Gaughan wrote in an email to The Daily Iowan that the trade tensions and the Pentagon report are unrelated and that China has taken a more aggressive position in the western Pacific for the past several years.

“Beijing seeks to be the preeminent military power in the region irrespective of our trade differences,” Gaughan wrote. “So in other words, even after the trade dispute ends, China’s military will continue to seek to expand its presence in the region.”

The Pentagon report, “Annual Report on Military and Security Developments Involving the People’s Republic of China,” said the country is potentially training pilots to strike U.S. targets and has expanded “overwater bomber operations.”

“Chinese military-strategy documents highlight the requirement for a People’s Liberation Army able to secure Chinese national interests overseas, including a growing emphasis on the importance of the maritime and information domains, offensive air operations, long-distance mobility operations, and space and cyber operations,” the report said.

This will most likely not have a huge impact on the international programs at the University of Iowa, political-science faculty say.

Political-science Associate Professor Brian Lai, the director of undergraduate studies, said the biggest effect on international students would be if their immigration status was in question. A domestic dispute would be more reason for students to worry, he said.

“If there were a direct military conflict, the students would wonder what their status here would be,” Lai said. “A lot of these kinds of disputes, you don’t see a lot of discord between foreign and non-foreign students.”

China has tried for a long time to shape its military to look more like that of the U.S., Lai said. Because North Korea borders China, he said China does not want a larger U.S. naval presence in the region.

“An active military conflict, I think, is something they prefer to avoid,” Lai said.

UI Ambassador in Residence Ronald McMullen said the current dispute between Canada and Saudi Arabia could be an interesting precursor to what is happening between the U.S. and China. Canada voiced its support of releasing jailed Saudi Arabian prisoners, and Saudi Arabia retaliated by telling Saudi students in Canada that they could no longer attend Canadian universities.

“This is kind of a frightening prospect, that should relations between China and the U.S. get really, really bad, we’ve seen this happen,” McMullen said.

China wants to increase its scientific and technological capabilities by sending its future researchers and academics to American universities, he said. This could deter China from escalating tensions with the United States, he said.