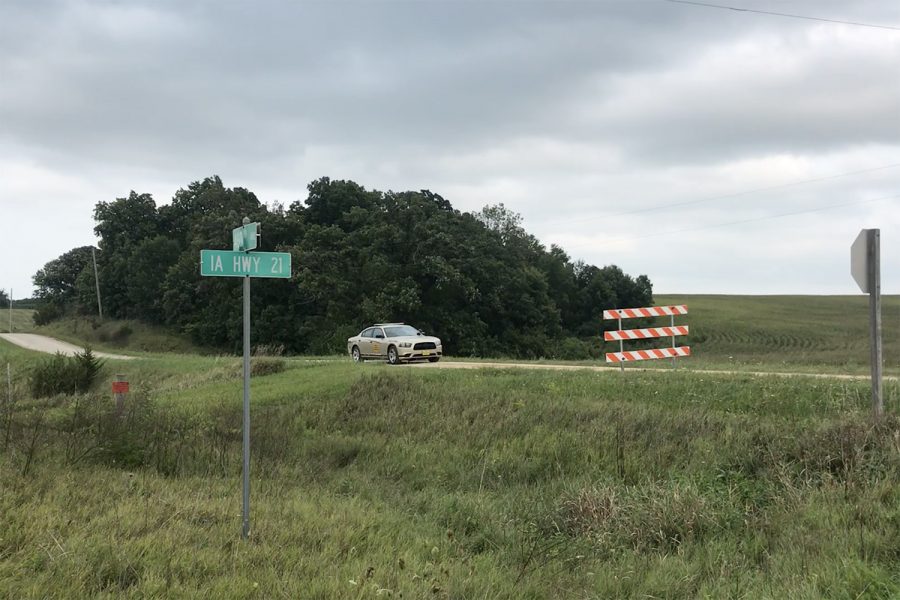 An Iowa State Patrol car sits behind a closed road sign on 385th Avenue outside of Brooklyn, Iowa near the site of where UI Mollie Tibbetts’ body was found Aug. 21.

After the attorney for Cristhian Bahena Rivera, the 24-year-old man charged with murder in the slaying of University of Iowa student Mollie Tibbetts, argued in court Wednesday that Rivera had worked in Iowa legally, the Associated Press reported Rivera worked on a dairy farm for years under a false name.

Rivera worked for the brother and son of Craig Lang, a 2018 Republican candidate for state secretary of agriculture, as an employee of Yarrabee Farms near Brooklyn, Iowa. The farm is owned by several people, including Dane Lang and Eric Lang, Craig Lang’s brother.

Dane Lang issued a statement Tuesday night regarding Rivera. Rivera had worked on the farms for four years, he said, and was vetted through the government’s employment-verification system. He said Rivera was “an employee in good standing.”

Dane Lang said that on Monday, authorities visited the farm and talked to employees. He said Yarrabee Farms follows all laws related to verifying employees are legal to work in the United States.

Since Tibbetts’ disappearance July 18, AP reported Rivera, who was hired in 2014, continued coming to work, and Dane Lang said “nobody saw a difference” in his demeanor.

Authorities said at a press conference in Montezuma, Iowa, on Tuesday that Rivera was an undocumented immigrant who was in the country illegally.

Rivera’s lawyer, Allan Richards, asked the court Wednesday for private court proceedings, which would keep journalists and members of the public from viewing those proceedings.

Members of “the highest levels” of government and the media coverage have acted inappropriately, Richards said, which could “make it impossible” for Rivera to receive a fair trial. Richards noted he is prepared to argue Rivera was in the country legally.

Magistrate Diane Crookham-Johnson denied Richards’ request. Rivera’s next appearance in court will be Aug. 31 at 2 p.m.

The judge set Rivera’s bond at $5 million cash only. If released on bond, he wouldn’t be allowed to leave Poweshiek County.

Authorities at Tuesday’s press conference in Montezuma said Rivera got out of his car while Tibbetts was on a run and ran beside her, then abducted and killed her. He then dumped her body in a cornfield in rural Poweshiek County, covering her body in corn stalks. Rivera led authorities to Tibbetts’ body on Tuesday morning.