After a reportedly undocumented immigrant was charged with murder in the slaying of UI student Mollie Tibbetts, Iowa's GOP senators call for the resurrection of the 2016 immigration legislation based on another Iowa woman. 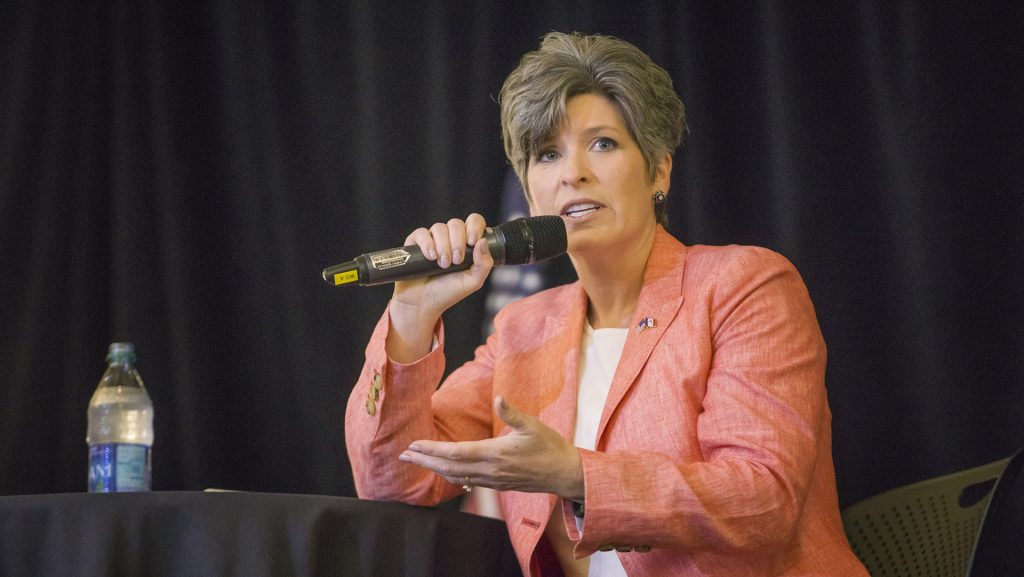 Sen. Joni Ernst, R-Iowa, responds to questions from the crowd at a Town Hall meeting in the Iowa Memorial Union on Friday, Sept. 22, 2017.

A day after authorities announced a murder charge had been filed against a reportedly undocumented immigrant in the case of missing UI student Mollie Tibbetts, Iowa’s GOP senators called to revisit 2016 immigration legislation.

Authorities have charged Cristhian Bahena Rivera, 24, with first-degree murder in the death of Tibbetts and have told the news media that Rivera was an undocumented immigrant.

On Wednesday in court, Rivera’s lawyer argued that Rivera was working in Iowa legally for a dairy farm owned by a prominent Iowa Republican family. Hours later, the Associated Press reported he had been working under a false name for years.

Rivera’s potential undocumented status caused Iowa GOP Sens. Chuck Grassley and Joni Ernst to call for the resurrection of immigration legislation that was constructed after a case involving an undocumented immigrant in Iowa two years ago.

The case involved 21-year-old Sarah Root, who died as a result of an OWI accident in which an undocumented immigrant was the driver.

At the time, Ernst and Grassley capitalized on the incident. They quickly got to work to create a network of GOP senators from Nebraska to sponsor a bill titled “Sarah’s Law,” named in her honor. Trump, too, used the case as campaign fodder during the summer of 2016.

On Wednesday, Grassley asked his colleagues to support the bill, which had been reintroduced at the beginning of the session in 2017. The bill passed the U.S. House in the summer of 2017 but never gained traction in the Senate.

“I urge the Senate to put partisanship aside and support Sarah’s Law,” Grassley said on the Senate floor Wednesday. “We can and we must do better.”

The bill would give U.S. Immigration and Customs Enforcement the power to take custody of an illegal immigrant who was charged with a crime resulting in the death of or serious injury to another person.

Despite narratives from the White House that illegal immigrants cause crime to increase, immigration advocates cite statistics that show otherwise. Studies in the past two years, such as the ones from the Marshall Project and libertarian think tank the CATO Institute, show undocumented immigrants commit less crime than American-born citizens.

Grassley voiced his support for ICE and called for his colleagues across the aisle to do the same.

“Amid cries from the radical far-left to abolish law-enforcement agencies such as ICE, I am proud to stand here in support of the brave men and women of ICE,” Grassley said. “So to my colleagues on the other side of the aisle who call for abolishing immigration enforcement, I urge caution.”

Ernst appeared on a Fox News segment the same day to lament the lack of support for the law, calling it “simple and straightforward.”

Grassley and Ernst aren’t the only politicians to speak out on immigration. Hours after the press conference Tuesday, Iowa Gov. Kim Reynolds and Vice President Mike Pence took to Twitter. President Trump called immigration laws a “disgrace” during a rally in West Virginia and released a video on Twitter on Wednesday in which he says, “An illegal immigrant came into this country and killed her” and calls on Republicans to pass legislation on immigration.

Rivera’s lawyer disputed Trump’s claims that Rivera came to the country illegally and criticized the president for trying to sway a potential jury.

“Congress has been dancing around the issue of securing our border and strengthening interior enforcement for far too long,” Grassley said on Wednesday. “We’ve told voters that we’ll fix the problem, but stories like Kate Steinle, Sarah Root, Kayla Cuevas, and now Mollie Tibbetts continue to appear on the news. Enough is enough.”