UISG examines its own diversity and suggests changes to increase student representation in its first ever demographics survey. 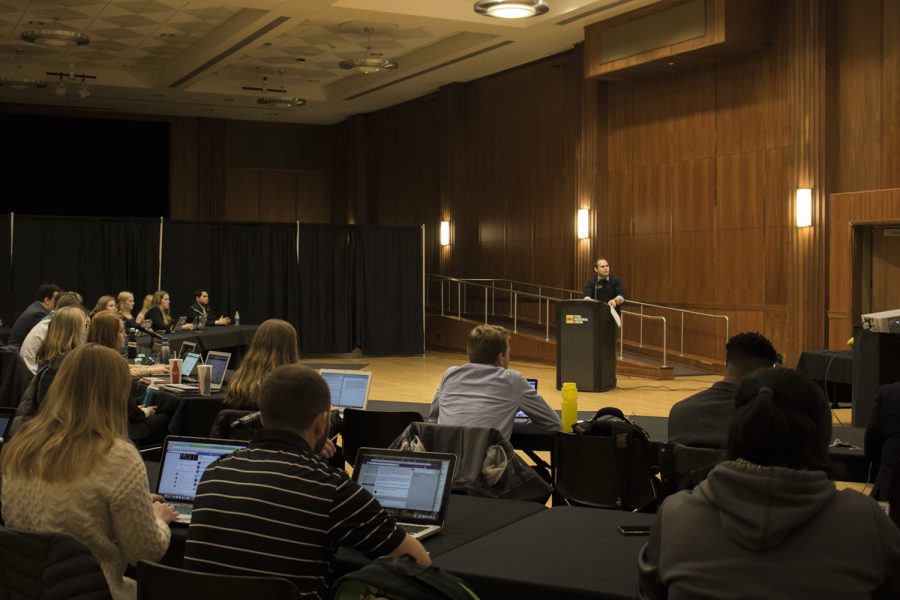 Tristan Schmidt, Director of Academic Affairs, address the audience during a UISG meeting in the second floor ballroom of the IMU on March 27, 2018. UISG met to discuss Neighborhood Ambassadors, people who could represent students in off-campus housing.

Diversity and representation are two issues at the forefront of University of Iowa Student Government’s first-ever demographics survey, published in late June.

In the spring, UISG collected information on the demographic and identity makeup of its members to consider the organization’s current diversity and pursue a more representative student government.

“Our hope is that the survey in general can better inform decision-making processes related to populations from different groups,” Schmidt said. “It’s about ensuring that those voices are adequately represented.”

Additionally, 23 percent identified as first-generation college students and 67 percent as middle class. Fifty of 60 UISG respondents are in the College of Liberal Arts & Sciences.

Forty members identified as white, 11 as Asian, two as African American, six as Hispanic or Latinx, two as Native American,  and one as multiracial.

“I think there are a lot of students who feel as if there is a divide between the student body and student government,” UISG Director of External Relations and new demographics report team member Herbert Meisner said. “I think it’s important that we show what we’re doing and making strides to make sure that we’re having all types of students represented in student government.”

In order to promote further representation in UISG, the survey outlined several recommendations for the future.

Schmidt said one potential solution is switching from a ticket system to an academic college system. Students would vote for representatives in their UI colleges with the goal of academically diversifying UISG.

Another recommendation was adding more constituency seats for populations underrepresented in UISG, such as transfer students and UI student-athletes. Currently, there are zero UISG members with athletics status and only one transfer student, according to the survey.

“These are all just possibilities made by the team,” Schmidt said. “However, they are not in any way being enforced without more research. These were ideas to create base changes in representation, whether identity-based or in academic thought.”

Schmidt said he hopes the reports will be published every semester.

“This survey provides a strong foundation for changes that should be made in UISG,” UISG Senator and new demographics team member Alexia Sánchez said in an email to The Daily Iowan. “I believe it’s a great way to reflect on how much we have progressed in terms of identities and inclusiveness, but it is also something that can continue to push us to improve.”