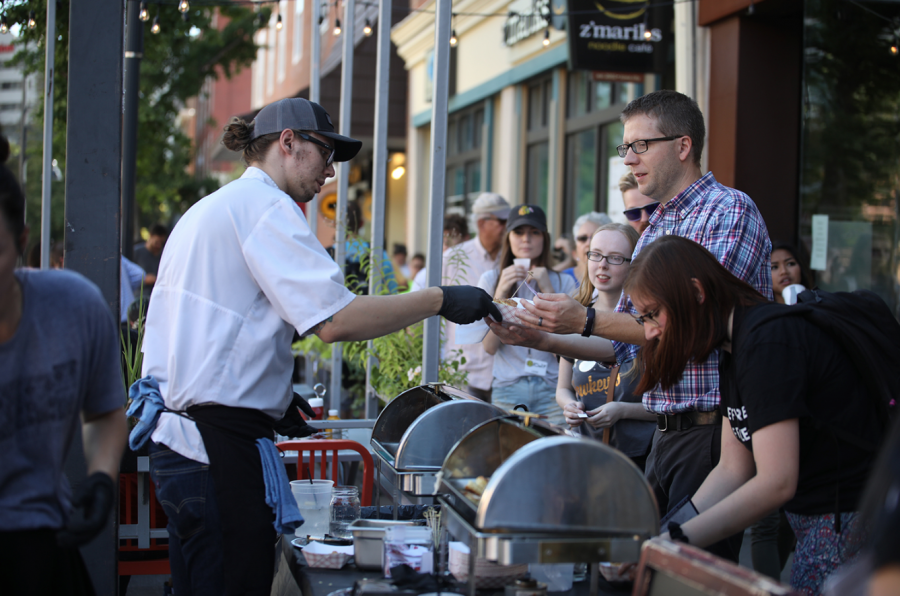 Foodies will delight to find a diverse selection of the best cuisine Iowa City has to offer at the 11th-annual Taste of Iowa City on Wednesday.

Taste will run from 4-8 p.m. that day. Forty-eight restaurants ranging from pizzerias to bakeries and bars to barbecue joints will participate, handing out sample portions of customer favorites.

Hamburg Inn No. 2 manager Seth Dudley has overseen that restaurant’s participation in each of his eight years as manager. Though initially quiet on his side of town, the festival expanded from downtown, encompassing more of the city’s food staples.

“Most people were concentrated downtown, and we kind of struggled up here on the North Side,” Dudley said. “But the Downtown Association has done a really good job of letting people know that there are a bunch of us vendors up here.”

In recent years, he said, the Iowa City Downtown District has added ticket stations closer to participating restaurants that are farther away from downtown. The administration has also spread awareness about these eateries to customers during the fair who otherwise would not explore beyond downtown.

Maria Berhow, the health and beauty buyer and store manager for the Bread Garden Market — which includes grocery aisles for shopping in addition to the restaurant — remains impressed with IC Taste.

“We have a very strong restaurant presence, so the experience you get from our Taste of Iowa City is one that is similar to other restaurants, yet with our own unique taste to it,” she said in an email to The Daily Iowan.

In addition to samples from its menu, Berhow said she and other Bread Garden caterers will hand out promotional materials and special offers to Taste attendees.

Christopher Hunter, the Downtown District director of special events, said the event will include entertainment both on the North Side and a pop-up shop on the Pedestrian Mall. Many of the restaurants will include games, music, and activities at their outside booths.

The event’s coinciding with the first week of the University of Iowa academic year is no accident.

“We think it’s a great way to introduce the students, old and new, to the food scene here in Iowa City,” Hunter said in an email to the DI. “We want them to see what our restaurants have to offer and become familiar with downtown, so in a way, it can act as a welcoming.”

Six ticket booths for the event will be located across downtown and the North Side. Tickets are $1 each and can be exchanged in varying amounts for food and beverages. The stores set the numbers, sampling some of the more popular items on their menus might cost people more tickets.

“There is a great diversity in what downtown has to offer, and this is a unique way to experience it,” Hunter said. “Hopefully, people can find something new they like and … restaurants [can] find new customers.”