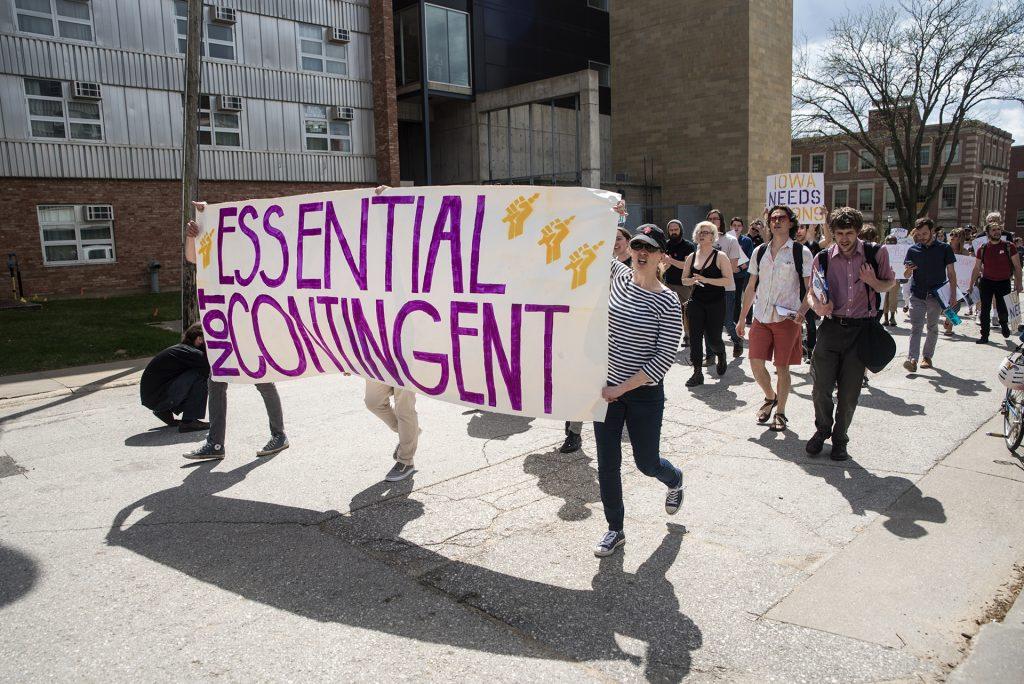 Protesters march from the Pentacrest to the home of UI president Bruce Harreld on May 4, 2018. UI's non-tenured faculty—grown to 52% since 2011—advocated for greater job security, fair pay, and benefits.

Visiting faculty serve for three years or fewer and are subject to nonrenewal at the end of their terms. They make up 4.2 percent of 3,272 faculty members, according to a fact sheet compiled by UI spokesperson Jeneane Beck.

The organization has been discussing transparency and increased rights with UI decision-makers since the last academic year and has held meetings, protests, and a sit-in at UI President Bruce Harreld’s office. Faculty members have previously shared that Harreld and Interim Provost Sue Curry have attended a meeting, though Ganim said other UI administrators have primarily been involved in the discussions.

According to Faculty Forward’s website, nontenure-track faculty fight for expanded benefits because they “face job insecurity with little prospect for advancement, increasing course loads, and no meaningful decision-making authority on campus. We feel that the efforts we make are often unaccounted for in terms of promotion, salary, and rehiring.”

Ganim said that although there is still progress to be made, the advances that have been made so far are a positive first step.

“[Winning expanded rights] shows that the faculty and administration are trying to work together to address some of these issues, and what I was impressed with, I think, is just the short amount of time in which we were able to come to this I think positive conclusion,” Ganim said.

Issues such as contracts and workload still need to be discussed, Ganim said, and decision-makers need to figure out what associate membership with the Service Employees International Union means to best move ahead.

The positive outcomes show “we can work together to address substantive issues and challenges that are before us,” he said.

Meaghan Harding, a UI lecturer in English as a Second Language, said she feels inspired by the progress made by Faculty Forward at the university.

“Having access to health insurance has made a material difference,” Harding said. “I’m in the position where I have health insurance, but there are many who aren’t … this is a big deal and a very visible victory.”

Although she has not been present for some of the more recent meetings between nontenure-track faculty and UI administrators, Harding said, she has heard promising news from the continued talks.

“What I have heard from my colleagues is that the meetings are progressing well, and nontenure-track faculty members say it’s nice to feel heard,” Harding said.

For Faye Bartram, a visiting assistant professor of history, the expanded health-insurance benefits will affect her directly. Bartram said that last year, she had to take part-time jobs to help pay for hospital visits because she did not have coverage through the university.

“These [new policies] will personally impact me,” Bartram said. “Last year, I would have to cancel class because I would be in so much pain.”