The UI is considering a plan that would require all freshmen and sophomores to live on campus. 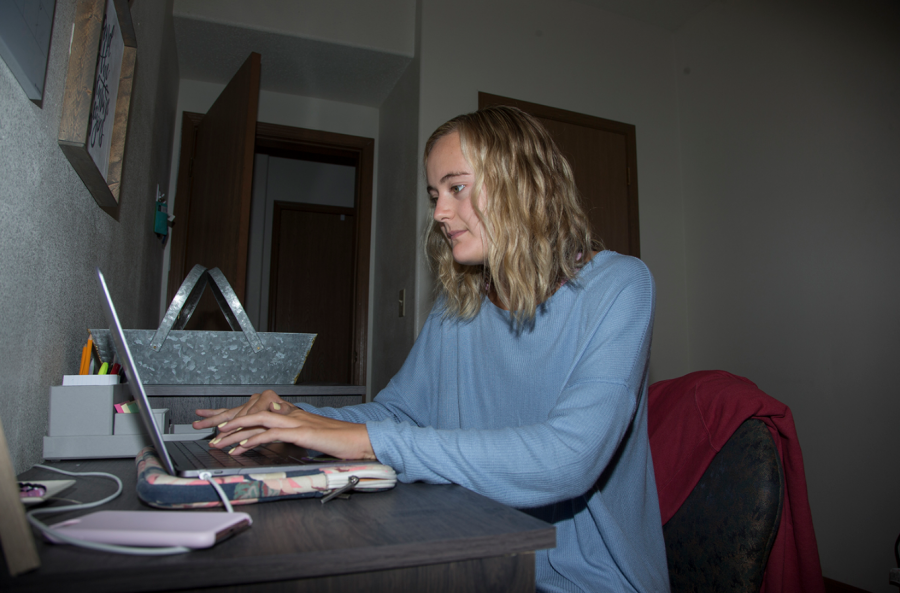 Sophomore Carly Witherell works on her computer in her apartment located in Iowa City on Aug. 19, 2018. As a sophomore Witherell said while she misses the convenience of the dorms, she enjoys the independence of her own apartment.

University of Iowa freshmen and sophomores may discover they will be required to live on campus in the future.

The proposal is included in the Strategic Housing Master Plan, a study commissioned by the UI and the cities of Iowa City and Coralville. It explores long-term housing solutions for students and other residents.

The on-campus living requirement would be part of the UI’s “Second-Year Experience” task force, which is set to launch in 2019.

To fully implement the freshman and sophomore on-campus requirement, six additional dorms and two dining halls would have to be constructed by the fall of 2025. According to the report, the estimated cost could be upward of $350 million.

As of last fall, only 15 percent of the students living on campus were sophomores.

Anne Matthes, the University Housing & Dining marketing and communications manager, said the UI is only in the exploration stage of the proposal, and the second-year-housing program would be a voluntary pilot program.

Matthes said the proposal is part of a larger university initiative dedicated to the success of second-year students.

“We are exploring this option because our top priority is the success of our students, and students who live on campus tend to have more academic success,” she said. “There are support systems in and around the residence halls that better allow residential students access to learning outside the classroom.”

In addition, Matthes said, students would not have to worry about signing a 12-month lease if they go home for the summer, and they could budget better for meals and other expenses.

More research needs to be done to determine the full economic impact.

Gustave Stewart, the UI Student Government city liaison, is aware of the difficulties students face when trying to find affordable housing in the Iowa City area.

“We have an understanding that there are not a lot of affordable housing options with low vacancy rates in the downtown Iowa City area,” he said. “Right now, it is simply being looked at how we can retain sophomores in the dorms in order to reduce pressure on the off-campus market.”

Stewart said the plan’s numerous housing solutions need further study, which is the goal of the second-year experience task force. Currently, the university does not have plans for construction, because the UI’s construction moratorium (a result of state budget cuts) is still in place.

The landlords at these companies declined to comment or did not respond.

Ben Eastman, a sophomore currently living in Catlett, said he doesn’t like the idea of a two-year requirement. However, he chose to live on campus, because he plans to study abroad next spring.

“I didn’t want to go through the pain of leasing an apartment, then having to sublease it,” he said.

Eastman, however, said he does see several advantages of living in the dorms compared with off-campus housing.

“Obviously, the location is perfect, and a lot of stuff is provided so we can just worry about school,” he said. “It’s a lot less responsibility.”

UI sophomore Carly Witherell, who lives in a downtown apartment, said she wouldn’t mind living on campus again because of the convenience and community it provides, although there are pros and cons to the housing options.

“Living off campus promotes independence,” Witherell said. “It gave me a reality check, so it just depends what the university wants for its students more: independence or community.”