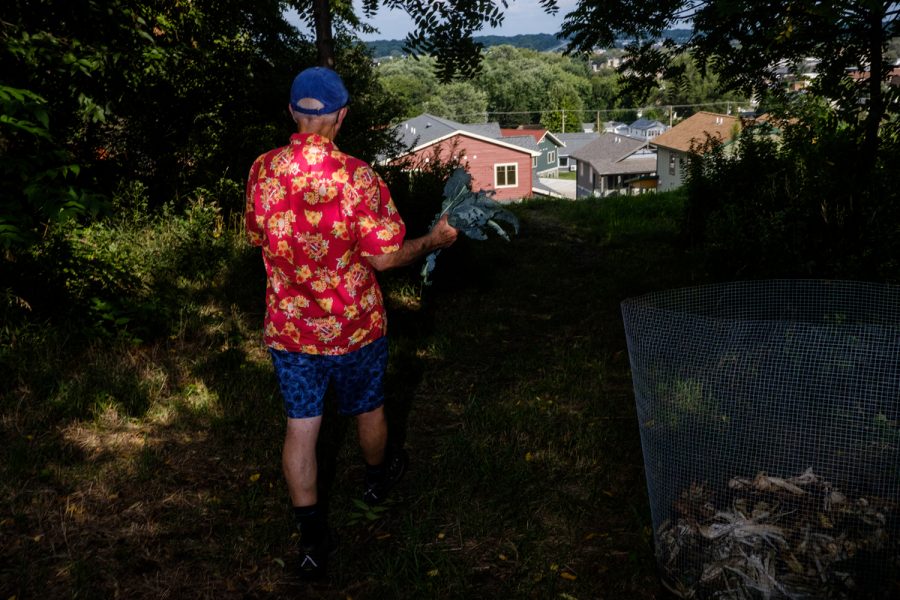 John Bowman leaves the community garden with some kale and a tomato at the Prairie Hill Co-Housing community in Iowa City on Thursday, August 16, 2018. John and his wife Valerie moved to Prairie Hill because they felt that cohousing offered a good balance between community and privacy. The community is based on the Danish coousing Model and includes private residences as well as spaces common to all residents, such as a communal garden. (Nick Rohlman/The Daily Iowan)

The first of its kind in Iowa, Prairie Hill cohousing community has welcomed new residents and gained more attention in Iowa City.

On Aug. 12, the neighborhood received more than 300 visitors for an open house. The 7.8-acre neighborhood has nine households, and it will add new applicants in the near future.

Prairie Hill resident Carolyn Dyer, a member of the group’s Board of Managers, said the houses are designed to be LEED certified, a U.S. Green Building Council measurement of energy efficiency. She said organizers expect to be given a Gold rating, the second-highest given.

“There’s no other development in the Cedar Rapids-Iowa City Corridor that’s even aiming to be LEED certified,” Dyer said.

Cohousing, a concept seen in such European countries as Denmark and in small pockets around the United States, emphasizes eco-friendly community living. While allowing for privacy with personal households, the communities promote cooperation and socialization with common dwelling areas and shared resources.

Nan Fawcett joined Prairie Hill’s Board of Managers eight years ago, having prior experience planning a cohousing community in North Carolina. Unlike in North Carolina, Fawcett was able to purchase a house in Prairie Hill. Despite having lived there only a couple of weeks, she said it’s been unlike any other home she lived in.

“I’ve been working 20 to 30 hours on this for the past many years,” Fawcett said. “It’s good to be living here now. It’s everything I’ve hoped for.”

By her front porch, she has a night-blooming cereus, a plant that blooms only once a year at night. When Fawcett could tell it was starting to bloom, she sat outside on her porch to watch it happen, and throughout the night she was joined by six other neighbors, including Dyer.

“Now, that wouldn’t have happened at my farmhouse,” Fawcett said. “I would have just watched it by myself. But here, I had a whole community that was interested in it.”

Sustainability and energy efficiency are priorities for Prairie Hill. Dyer said one resident’s energy bill was as low as $26 despite the house being entirely electric. The rooms are well-sealed, so little air infiltrates, Dyer said.

Along the dirt trail up the hilly terrain the neighborhood is built on, a grove of redbud trees are planted to replace the trees uprooted in the community’s construction.

Many of the redbuds are named in honor of women important to members of the neighborhood, including Maya Angelou, Rosa Parks, and Sojourner Truth. Fawcett named one redbud after her father, Alfred.

At the top of the hill overlooking the neighborhood sits a community garden, home to a variety of produce including tomatoes, squash, and pumpkins.

For John and Valerie Bowman, it’s one last adventure. They had explored cohousing options when they lived in California and had been interested in the concept for some time. After being tipped off by their daughter, who lives in the Iowa City area, they went through the membership process and secured a studio apartment in the community building.

“The two big draws for us were the environmental one, because we wanted to leave a lighter footprint on the planet and the other being community,” John Bowman said. “We’ve lived in nice neighborhoods, but it’s not quite the same as being in a cohousing community, where you’re doing so many things together.”