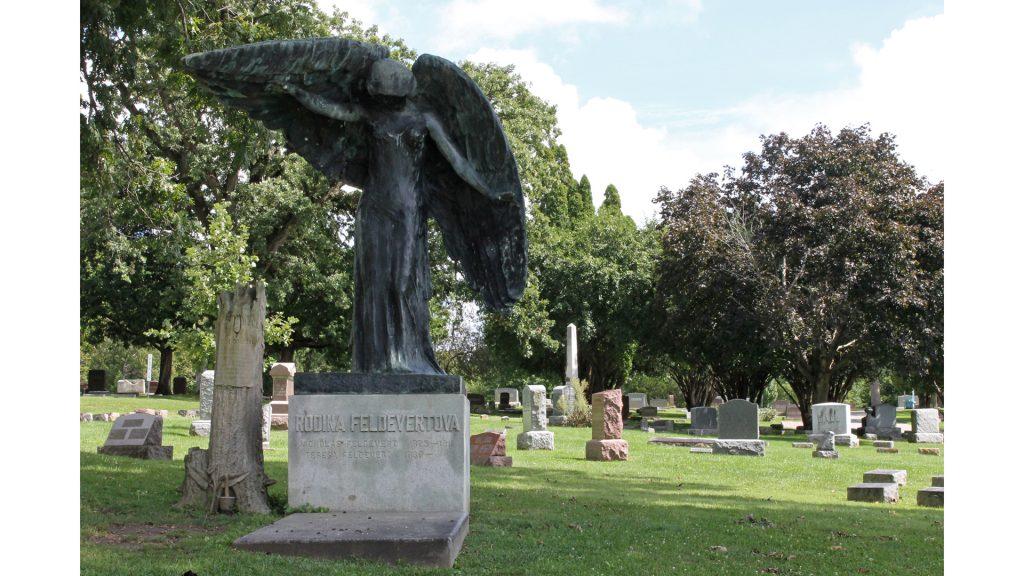 The black angel is photographed at Oakland Cemetery in Iowa City on Monday, September 7, 2015. The black angel is an eight and a half foot tall burial monument built for the Feldevert family in 1912. Since then, it has been the source of many legends in Iowa City; most of which are connected to the mysterious change in color that the angel took, turning from a golden bronze to black. (The Daily Iowan/McCall Radavich)

If Iowa City residents can’t wait until October for the ghost stories and goblins, they can join the Iowa City Ghost Hunters for the Party Hop Ghost Tours of “haunted” locations across Iowa.

Created by Matthew O’Brien, the founder of the IC Ghost Hunters, the spooky excursions will take passengers on monthly tours to different “haunted” destinations around Iowa City and nearby areas to give them the experience of being a ghost hunter.

O’Brien started the project with the help of eastern Iowa bus company Party Hop to create something unexpected in the community.

“My goal is to be able to not only teach people the paranormal side of what goes on in Iowa City … but also teach them about the history of the city,” O’Brien said.

He and his team have conducted research on Iowa City that dates back to the 1850s. The members have been able to pinpoint different locations that help them develop a basic understanding of paranormal activity in Iowa City that they can provide to the general public.

The first ghost tour occurred July 27, and the guests went to stops at popular haunted locations in Iowa City, including Gaslight Village and the most notable local favorite — the Black Angel in Oakland Cemetery.

All members of the tour will be allowed to bring paranormal investigative equipment, and electronic magnetic field meters will be provided to all.

O’Brien said anything that conducts electricity gives off an EMF level. The goal is to try to find EMF levels away from everything else.

EMF meters are handheld devices designed to detect fields emitted by moving electrically charged objects. In theory, O’Brien said, if the EMF picks up a signal where there is no surrounding electricity, then some believe it is caused by paranormal activity or a spirit trying to manifest itself.

Although the first tour occurred in Iowa City, O’Brien plans to expand to other areas across Iowa to give more people the opportunity to be able to say they have been ghost hunters.

The next tour will visit Edinburgh Manor, 13241 E23 County Home Road, Monticello, on Aug. 24, leaving Iowa City at noon. O’Brien’s goal is to plan a tour once a month indefinitely.

Party Hop owner Jeremy Rew said his company will provide a bluebird school bus outfitted for an older crowd, with lights, speakers, and laminated floors. It may be an older bus, but it’s not what people used to ride in for school, Rew said in an email to The Daily Iowan.

“We are most looking forward to getting the news out about the tours and also the free paranormal investigations we provide at Iowa City Ghost Hunters,” local ghost hunter Heather O’Brien said in an email to the DI.