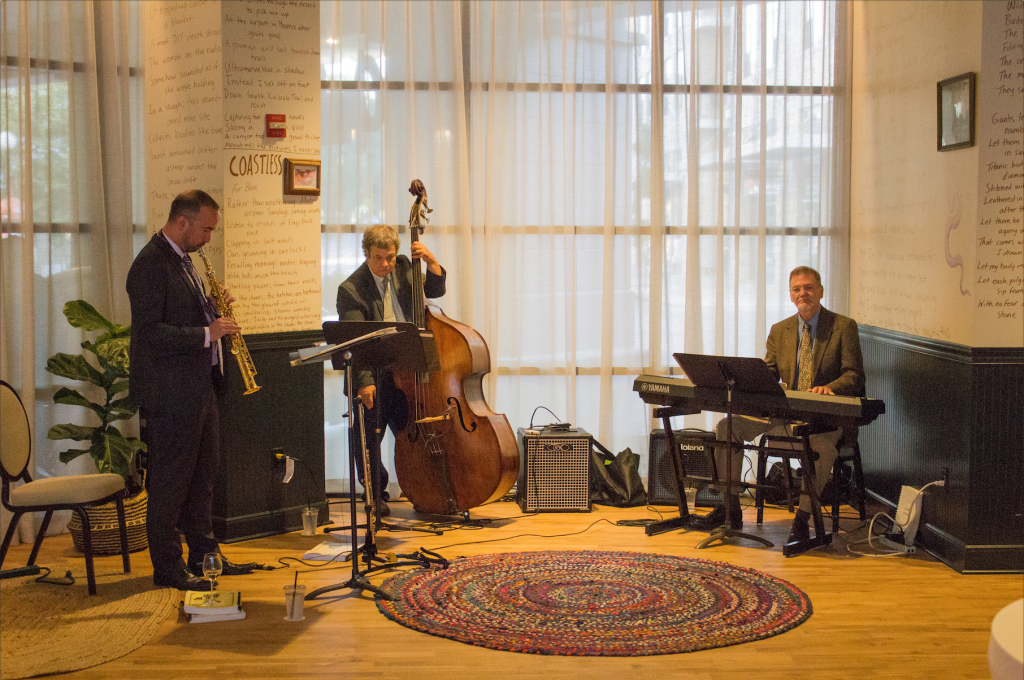 A live jazz band is seen at the Graduate hotel in Iowa City for a VIP tour on Tuesday, July 24, 2018. (Michael Aragon/The Daily Iowan)

Members of the Iowa City community gathered on the evening of July 24 at the new Graduate Hotel to learn more about what the establishment has to offer. Located at the heart of the Pedestrian Mall, the owners of the hotel purchased the facility from the Sheraton and renovated it earlier this year.

The ripped-up Ped Mall sat behind the hotel’s floor-length curtained windows, part of the reconstruction of the Downtown Streetscape Plan, which focuses on improving accessibility and infrastructure.

Hotel general manager Kurt Wiksten welcomed the event’s attendees and invited them to tour the guest rooms upstairs as they milled about the hotel’s 1970s-inspired restaurant, Gene’s. The restaurant was named after the late Gene Wilder, a University of Iowa graduate.

Guests were able to try an array of food from Gene’s menu, along with drinks from the bar. Wiksten also informed the group that the outdoor patio seating area would open shortly.

Graduate hotels are opened only in university towns, where they stand as an intersection between local culture and college pride.

Inspiration for the Iowa City location was drawn from the Iowa Writers’ Workshop and Iowa City’s distinction as a UNESCO City of Literature. Literary quotes cover the walls of the hotel lobby, with a large bookcase standing behind the front desk and a cluster of bookcases surrounding a portion of the lobby’s seating area.

A live instrumental band provided background music for the event, adding a warm and inviting atmosphere to the space. A vintage feel was apparent throughout, with touches of Iowa City and the university scattered throughout the hotel.

With its black and gold checkered exterior overlooking downtown, the Graduate hopes to be a place for the community to come together, along with providing visitors a taste of Iowa City.

“Being in a university town, we want to create that environment for and have that tradition with families that are coming in from freshman to senior year,” Wiksten said. “We are also very involved with the community in regards to local partnerships.”

Upstairs, farm-theme wallpaper line the hallways that lead into meticulously decorated guest rooms. On every room’s door is a plaque that reads “We are all students” with the Graduate’s logo. The walls of the room hold artwork, some of which was curated just for the establishment. It portrays different elements of Iowa such as Field of Dreams, Nile Kinnick, and silhouettes of Wilder. A rotary telephone sits atop the nightstand with a vintage desk placed in the corner of each room.

The Graduate does not plan on having an official grand opening, because the management people want to focus more on building a lasting relationship with the community.