The Iowa athletics director spoke with the media on July 24, answering questions pertaining to the north end-zone project, scheduling, and alcohol sales at Kinnick. 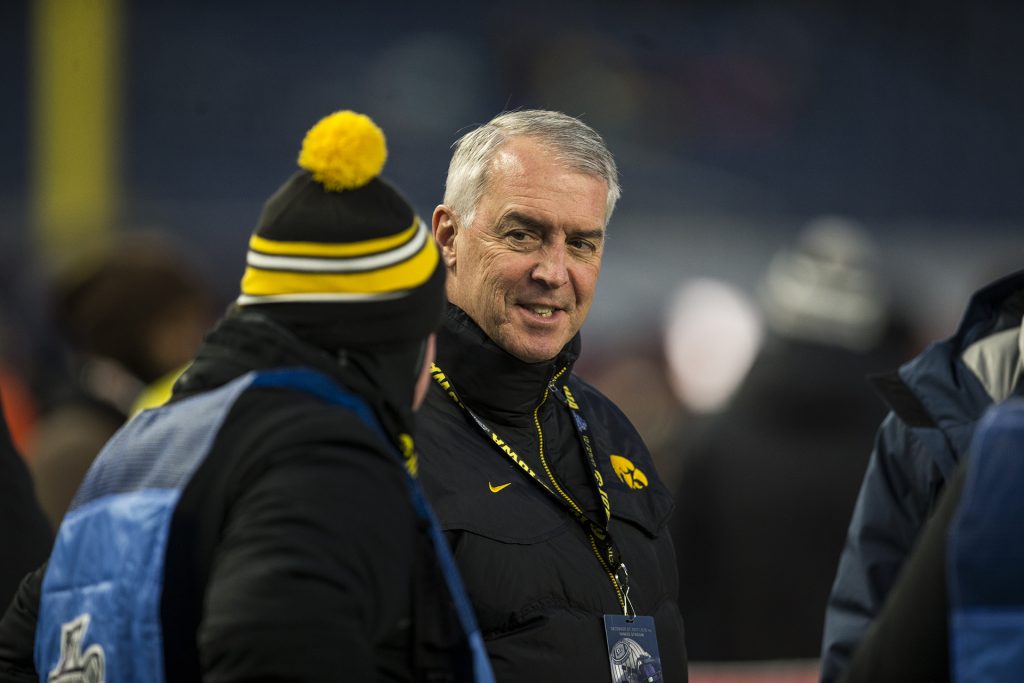 Hawkeye football is slightly more than a month away from its season-opener against Northern Illinois (Sept. 1), and while Hawkeye fans are itching to see the Black and Gold kick things off, the anticipation of the north end-zone renovation runs nearly as strong.

Iowa Athletics Director Gary Barta was in Chicago along with head coach Kirk Ferentz, quarterback Nate Stanley, and defensive linemen Parker Hesse and Matt Nelson for the Big Ten’s annual media days, and he was pleased with the renovation.

What he wants from fans, however, is patience.

“So, it’s going to be a great experience, but in Year 1, patience is going to be the virtue, because restrooms and concession stands will be temporary,” he said.

He added that the club seating is “virtually sold out” and the Ironman boxes are “long sold out.”

On top of the comfort for fans, Barta and the rest of his team also wanted the new fan experience to make the stadium atmosphere more electric.

“For me, being able to go experience Iowa for the first time last year in person, that’s a tough place to play,” Franklin said.

When the north end-zone renovations are finished, Barta believes that the current wild atmosphere’s intensity will only rise.

“One of the reasons it’s one of the toughest places to play is because our fans are so passionate, so loyal, so loud,” he said. “But they’re also right on top of the field … [the new seats] are closer, higher. I think it’s going to add to an already historic experience.”

Prior to the renovation, Kinnick’s capacity was 70,585 fans. The new-look stadium will hold somewhere in the 69,000 range.

“Starting out, there was some sense to stay at [70,000] just because it’s a nice round number. I think from a round-number standpoint, we can still say 70, but it dips slightly below,” Barta said. “I think a couple of things. One, at the end of the day, it was more important that the fan experience was improved. So, having to go down a little bit was worth the exchange for the fan experience. No. 2, we’ll still be able to remain in the top 25 in attendance in the country. That was important to me.”

Barta said he met with the stadium architects, and they assured him that if need be, there is room for expansion should the program and Athletics Department opt to increase Kinnick’s capacity.

“There’s a logical way to create more seats in the south corners,” he said. “Again, that’s not probably going to be in my tenure, but it is something that is available if we need it.”

Recently, there have been plenty of questions surrounding the balance of the Big Ten. More highly ranked programs lie in wait in the East Division, but Barta remains adamant that the Big Ten is competitive, top to bottom, and he’s a fan of playing teams close by.

“Here’s what selfishly at Iowa, I like: I like playing all of our border schools,” he said. “I like it for our fans; I think it creates more energy an excitement. Selfishly, I like the fact that we have East-West [Divisions].”

When asked about the possibility of selling alcohol to the general public at Kinnick, Barta said there isn’t a plan in place that would take effect in the near future.

He did not, however, rule out the premise of doing so down the road.

“The environment in and around Kinnick Stadium related to the use of alcohol is better today than it was 10 or 15 years ago. We have fewer arrests. We have fewer issues in the stadium. We’re kicking fewer people out. That’s a starting point. That’s awesome. What happens going forward, if the country continues to see schools adding the sale of alcohol, we won’t be the first. We probably won’t be the last to do it.”