After President Trump announced up to $12 billion in emergency relief for farmers affected by the trade war, some of Iowa’s policymakers released statements. 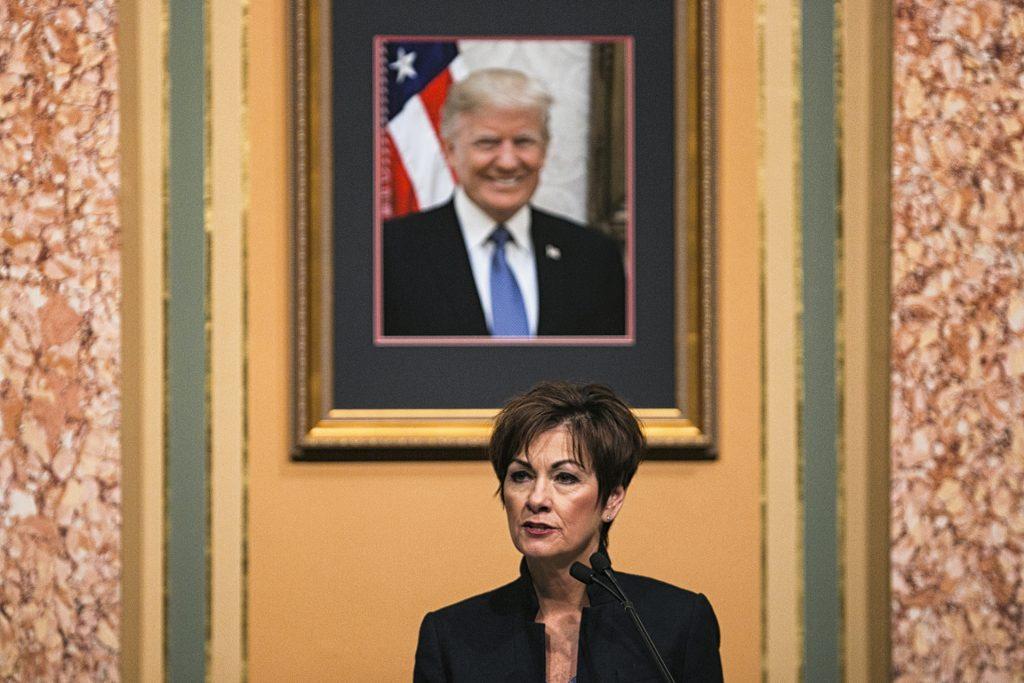 Iowa Gov. Kim Reynolds speaks while a portrait of President Donald Trump hangs above her during her first Condition of the State address in the Iowa State Capitol in Des Moines on Tuesday, Jan. 9, 2018. Reynolds took over the governor office in May of 2017.

Some Iowa lawmakers have expressed their views after the Trump administration announced an emergency relief fund for farmers affected by the trade war with China.

The federal aid was announced by the U.S. Department of Agriculture; it will be obtainable through a direct assistance program. Up to $12 billion will be allocated for emergency relief to U.S. farmers.

In March, President Trump first levied tariffs on steel and aluminum imports, causing other countries, including China, to retaliate. Since then, U.S. soybean prices have dropped around 20 percent. The prices for corn, pork, and other goods Iowa is known for have declined as well.

According to the Iowa Soybean Association, soybeans are the leading export of the U.S. with sales of $27 billion last year. China is the top market for U.S. soybeans, accounting for $12 billion to $14 billion of total sales in 2017.

Also according to the Iowa Soybean Association, Iowa State Associate Professor of economics and crop markets Chad Hart said Iowa farmers stand to lose up to $624 million because of higher tariffs implemented by China.

The announcement of federal aid comes right before Trump is scheduled to be in Peosta, Iowa, on July 26 to visit Northeast Iowa Community College for a roundtable on workforce development. Rep. Rod Blum, R-Iowa, originally tweeted that Trump would visit Dubuque.

In regards to Trump’s federal-aid announcement, Blum tweeted that he appreciated the president’s efforts to help farmers.

I appreciate @POTUS @realDonaldTrump efforts to help farmers who will bear the brunt of short term retaliatory tariffs as better trade deals are consummated. https://t.co/bseKE74boW

Sen. Chuck Grassley, R-Iowa, released a statement on July 24 saying he doesn’t fault the president, but it’s not fair to expect farmers to bear the brunt of tariff retaliation for the entire country.

“I’ve had several White House meeting with President Trump to express my concerns in strong terms,’ the statement said. “The president’s announcement of billions of dollars in aid that will be made available to struggling farmers later this year is encouraging for the short term. What farmers in Iowa and throughout rural America need in the long term are markets and opportunity, not government handouts.”

Gov. Kim Reynolds released a statement on July 24 agreeing with Grassley, saying the aid provides a short-term fix but not a long-term solution.

Sen. Joni Ernst, R-Iowa, released a statement on the evening of July 24 also saying that while a trade-mitigation package could boost farmer morale in the short term, that the package is ultimately a short-term fix.

“We need a longer-term strategy to ensure that farmers are able to sell their goods around the globe,” the statement reads.

Iowa Secretary of Agriculture Mike Naig also released a statement on July 24 saying that Iowa needs certainty when it comes to trade relationships.

“We continue to urge the administration for the swift resolution of our trade negotiations with China and our NAFTA trading partners, as well as pursuing new trade agreements,” the statement reads. “As I travel the state, I continue to hear Iowa farmers want more trade, not aid.”