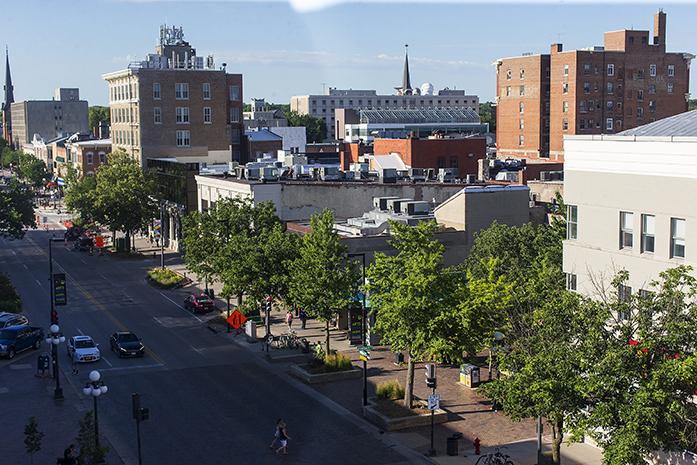 The Downtown District’s longest standing event is a simple one. There will be no concert stages or sand volleyball courts at the 50th-annual sidewalk sales. There will be sidewalks, there will be sales, and according to the owner of Hands Jeweler, who has witnessed 49 of the 50 events, there will be some of the best people-watching that Iowa City has to offer.

“You get a different group of people downtown than you normally get,” Bill Nusser said. “It’s a wonderful opportunity to see a person from every walk of life in Iowa City.”

The Sidewalk Sales often bring people from out of town to the city, and sharing his passion for this place comes easily to Nusser. He’s the fourth generation in his family to own Hands, and the Sidewalk Sales have dutifully marked his time each year, both as a business owner and a citizen of Iowa City.

Just this year, Nusser threw out a 30-year-old rug that he bought from the store that proceeded Active Endeavors at a sidewalk sale for around $25.

“That was about $1 a year to own that rug,” he said and laughed.

Names of new stores and the seemingly continual strain of construction make it impossible to ignore how quickly Iowa City is changing, but the Sidewalk Sales draw on the simplicity of what has remained the same.

“It really is kind of this throwback feeling, of maybe a simpler time, a time where you’re just out shopping and wandering from store to store,” said Betsy Potter of the Downtown District.

The Iowa City Public Library is partially supported by volunteers who run a year-round store on the second floor of the library, and at the Sidewalk Sales, they will have the chance to move some merchandise to the pop-up store on the Pedestrian Mall for a pay-what-you-want book sale.

“It’s a win-win; you get new things to read, the library makes some more money, and our volunteers feel very good helping books find new houses,” she said.

Ten Thousand Villages, a nonprofit, fair-trade retailer that labels itself an Iowa City business with a mission, will mark down everything in the store at least 25 percent for the Sidewalk Sales. The original artisans are always paid ahead of time in full, the store notes.

The store is located on the Dubuque Street stretch of the Ped Mall, one of the parts of downtown most affected by reconstruction. With renovations also on their way for the store’s interior, Bell said, employees are doing their best to move a lot of merchandise, which also inspired them to start Sunday hours from noon to 4 p.m.

While the Sidewalk Sales will run through July 22, Potter and Nusser were both clear that the early bird really does get the worm. To prepare, Potter advises visiting the Downtown District’s website to learn more about which retailers are participating and what deals to keep an eye on.