Behind the booth: Inside an Iowa City music studio

Tyrell Thornton is a producer and recording engineer at Elite Sound and Design Studios. His music career started with $60 to navigate the concrete jungle of New York. 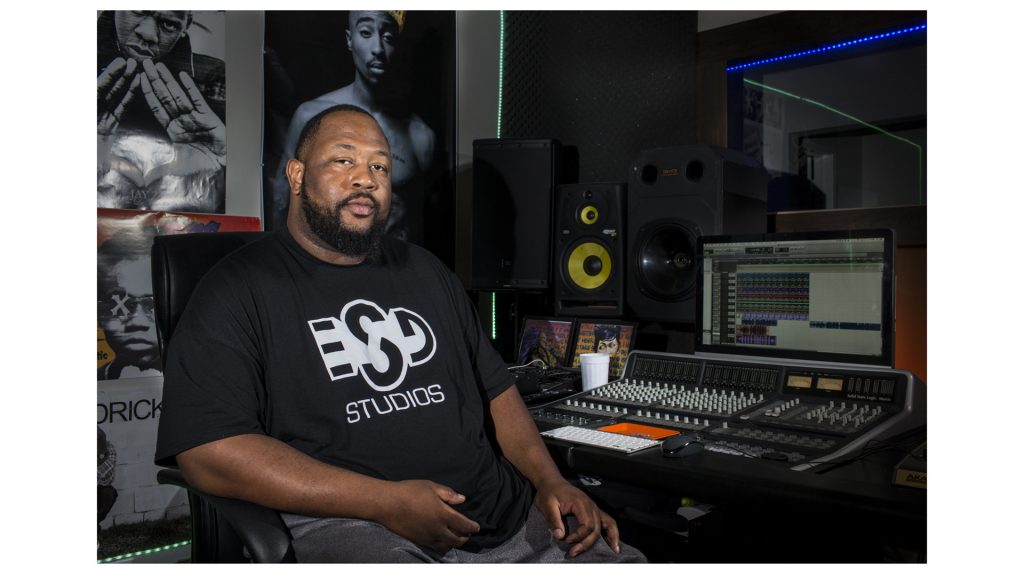 Tyrell Thornton sits for a portrait in his recording studio in Iowa City on Sunday, July 15, 2018. Thornton, who produces as "The Cubist" first started producing as a student at Kirkwood Community College in Cedar Rapids. (Nick Rohlman/The Daily Iowan)

When you walk into Elite Sound and Design Studios, the mood lighting is apparent. Lights rotate from red to green to blue soothingly. Posters of such rap legends as Tupac and Biggie Smalls hang on one wall and on the other, some graffiti.

Tyrell Thornton’s favorite part of the studio is a screen on the back wall that cycles through different images of rappers and promotional posters.

Thornton, who also goes by the name The Cubist, is a producer and recording engineer at ESD Studios. Originally from Chicago, he has worked in the music industry for more than 15 years and has worked with artists such as Kendrick Lamar and Jay Rock.

Thornton said he has long wanted to be in the music industry. He got involved while at Kirkwood Community College in Cedar Rapids, where he also played basketball.

“I just wanted to make beats and produce music,” he said. “I didn’t get into it until I came to Cedar Rapids. I had a couple classes I took, but it wasn’t teaching me what I wanted to know, so I started learning on my own.”

In 2007 with $60, Thornton headed to New York, where a friend of his lived. He stayed there for two and a half years, touring different studios and gaining experience.

“I went to every studio out there and worked,” he said. “I slept on floors, met people, and just ground from the bottom.”

The current location of ESD Studios, on Benton Street, opened in October. Before that, ESD had been located on the Pedestrian Mall since 2012.

Business has grown since the studio’s move to the new location Thornton said. When ESD originally opened, the space wasn’t what it is now, with a full recording setup. It was simply a couple small speakers and a keyboard that still sits in the studio today.

Thornton said the studio has around 40 regular artists who come to record, but he also has people come from Chicago and New York to work. He said if he’s not on the road, he’s in the studio working.

“I just love this,” he said. “The creativity and making the music and having people hear it. It’s like therapy for me and the people who come here to record. Sometimes, people come record, and we don’t even put it out. They just come in to record and get some steam off their chest.”

Mike Page, an artist from Chicago who has worked with Thornton for more than a decade, said the studio is a second home for him.

“The vibe is great, the artwork is great,” Page said. “It’s a different type of zone. It’s soothing, therapeutic.”

Page said he makes all types of music, from hip-hop to R&B to soul to pop.

“It’s whatever the vibe brings,” he said. “You never know what the lights in the studio will bring out of you. It’s also a pleasure and a blessing to have a producer like Cube around here that’s as well equipped as this.”

Aside from the recording and music production, ESD Studios is heavily involved in concert promotion. It puts put on concerts at venues in Iowa City including the Union, Gabe’s, and the Yacht Club. It also puts on shows around the rest of the state and in Minneapolis and Chicago. Some notable acts the studio has put on shows for in the past year include Travis Scott and Lil Durk.