A stunned Washington reacts to Trump​’s performance in Helsinki 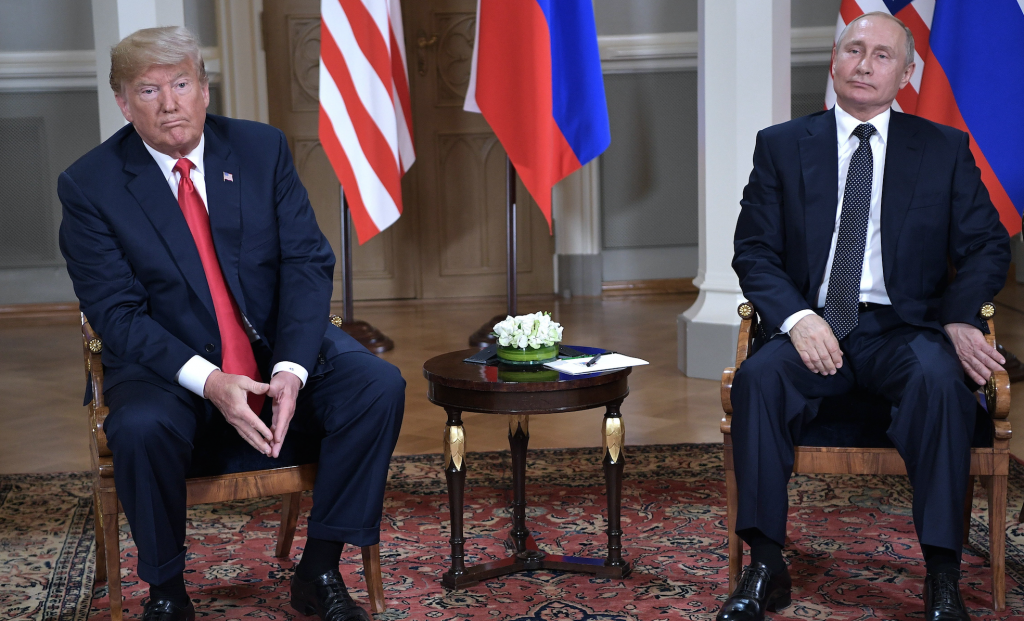 Democrats rushed to condemn Trump’s continued refusal to acknowledge Russian interference in the 2016 election. But it was the reaction on Trump’s side of the political aisle — as even many administration defenders sought cover — that most captured the way the president’s comments July 16 stunned many in the capital.

Before Trump’s meeting July 16 with the Russian president, several Republicans had urged him to send a strong sign of disapproval. That Trump did almost the opposite brought sharp denunciations from the handful of Republicans who in the past have been willing to criticize the president — most of whom are not seeking re-election.

“I never thought I would see the day when our American president would stand on the stage with the Russian president and place blame on the United States for Russian aggression. This is shameful,” tweeted Sen. Jeff Flake of Arizona, a frequent Trump critic who is retiring.

McCain, who has criticized Trump’s foreign policy over and again, said in a statement that Trump’s “press conference in Helsinki was one of the most disgraceful performances by an American president in memory. The damage inflicted by President Trump’s na​ïvet​é, egotism, false equivalence, and sympathy for autocrats is difficult to calculate. But it is clear that the summit in Helsinki was a tragic mistake.”

Consistently, the Republicans most willing to push back on the leader of their party have been members who are retiring or people involved in politics who don’t hold an elected position.

Trump’s denials that Russia attempted to interfere in the election have been one of the few things House Speaker Paul D. Ryan, R-Wis., has been willing to publicly criticize the president about. He repeated that criticism in a statement July 16.

“There is no question that Russia interfered in our election and continues attempts to undermine democracy here and around the world,” he said. “That is not just the finding of the American intelligence community but also the House Committee on Intelligence. The president must appreciate that Russia is not our ally. There is no moral equivalence between the United States and Russia, which remains hostile to our most basic values and ideals.”

Rep. Trey Gowdy, R-S.C., who has been an outspoken critic of the FBI’s handling of the Russia investigation and also is not seeking re-election, said he’s confident that the intelligence community and other officials “will be able to communicate to the president it is possible to conclude Russia interfered with our election in 2016 without de-legitimizing his electoral success.”

Corker, the chairman of the Senate Foreign Relations Committee, who is also retiring, told reporters that Trump’s comments were “deeply disappointing” and made the U.S. look like a “pushover.”

“I get the feeling ​… sometimes the president cares more about how a leader treats him personally than forcefully getting out there and pushing against things that we know have harmed our nation,” Corker said. “I thought that’s what we all experienced today.”

A few rank and file Republicans from safely conservative seats joined the fray as well.

“We must take seriously the warnings of Director Coats and the American intelligence community. Russia is not our friend. Vladimir Putin’s goal is to destabilize America and reduce our global leadership role,” Indiana Rep. Jim Banks said in a statement, referring to Dan Coats, the director of national intelligence.

Coats, for his part, issued a statement that iterated the intelligence community’s view that Russia did interfere in the 2016 campaign.

“The role of the intelligence community is to provide the best information and fact-based assessments possible for the president and policymakers. We have been clear in our assessments of Russian meddling in the 2016 election and their ongoing, pervasive efforts to undermine our democracy, and we will continue to provide unvarnished and objective intelligence in support of our national security,” he said.

On the Democratic side, House and Senate members quickly jumped on Trump’s comments. Sen. Mark R. Warner of Virginia, the highest-ranking Democrat on the Senate Select Intelligence Committee, said Russian meddling will continue to be a threat. “This challenge and threat will not go away,”
Warner said. “I think there are times in the Senate when people have to step up and say what side you’re on. This is one of those times.”

The ranking Democrat on the House Intelligence Committee, Rep. Adam B. Schiff of California, urged the GOP to “take off the blinders.” Former CIA Director John O. Brennan went further. “Donald Trump’s press conference performance in Helsinki rises to [and] exceeds the threshold of “high crimes [and] misdemeanors,” he said in a tweet. “It was nothing short of treasonous.”