UI alum Sri Ponnada may have to self-deport to India in February, and her younger brother, current UI student Sam, may have to follow if U.S. laws don’t change in the next few years. 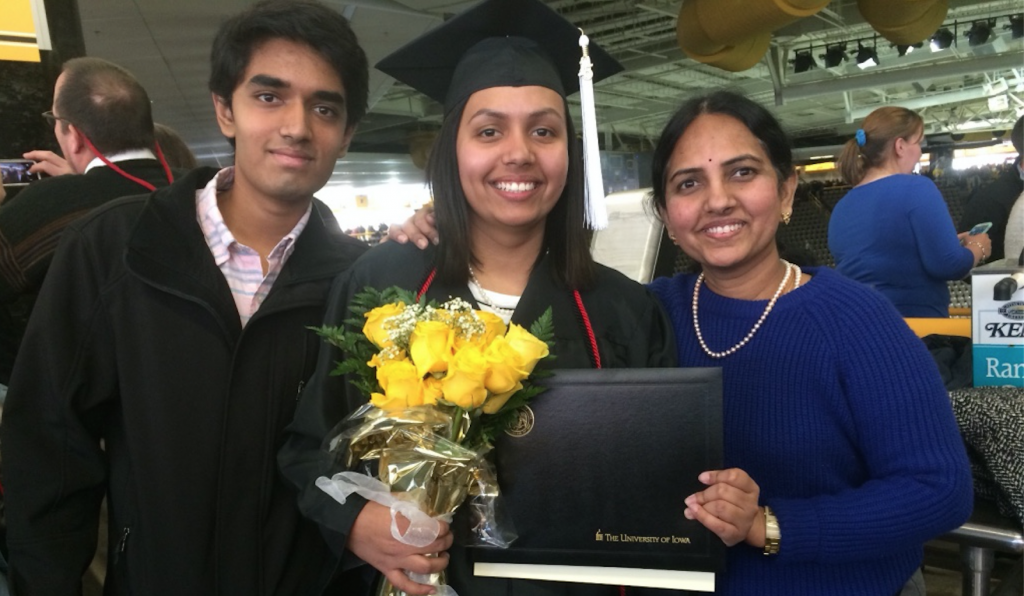 Sam Ponnada loves science. The physics, astronomy, and math major’s dream is to work for NASA. In fact, last year, he was involved with a NASA project at the University of Iowa. Then, suddenly, he was pulled off the project. The reason? Ponnada is not an American citizen.

Though born in Jamaica, the 18-year-old UI junior is an Indian citizen. But, he only lived there briefly with his grandmother when he was an infant. He has resided in the United States for almost a decade after moving from Jamaica to New York and then to Iowa. His mother is a physician in Waterloo on a H1B visa, which, according to the Bureau of Consular Affairs is given to “temporary workers of distinguished merit and ability performing services.”

Currently, Ponnada is on a F1 student visa given his full-time status, but after he graduates, he’s not sure where he might end up.

“It’s hard for me to even picture anything, because the future is so uncertain,” he said.

However, the waiting time for an Indian individual with a H1B visa to receive a green card can be as long as 150 years.

According to the U.S. Citizenship and Immigration Services, as of May, there were 395,025 foreign nationals waiting for permanent residence under the employment-based preference category. Of that number, 306,601 were Indians.

Existing U.S. law permits only 7 percent of total green cards to be issued toward one country. With hundreds of thousands of Indians in different visa categories waiting for permanent residence, Indian applicants have the longest waiting periods of any demographic.

When Sam turns 21 in three years, he will no longer be eligible to receive a green card with his mother. Essentially, he would have start over and get on a waiting list of his own.

Sam said his family moved to the United States for a better education and to live a better life. He said he considers himself to be an American.

“Once we moved here, we’ve never had trouble with fitting in,” he said. “The values that America has: the liberty and the idea of being able to be your best self. That’s what we moved here for. As well as to give my sister and me a better education.”

Sam’s older sister, Sri Ponnada, faces an even shorter deadline before she will potentially be forced to leave the country. The recent UI graduate in computer science and English, currently residing in Seattle and working for Microsoft, may have to self-deport to India in February due in part to the green-card backlog. [Note: Sri Ponnada is a former DI Opinions columnist.]

Sam said his concern right now is more for his sister than for him.

“I’m definitely worried about my sister and what will happen,” he said. “She will make the most of it, but she has a life in Seattle. Having to disrupt that and pack up and move, that’s a lot to deal with.”

Sri said self-deportation is the reality for many highly-skilled immigrants such as her.

“We don’t have a pathway to stay here,” she said. “I feel like an American in every sense, but I don’t know when I’ll ever be able to become one.”

“When people ask me where I’m from, I say I’m from Iowa because I’m proud to be from Iowa,” she said.

Sri recently received support from Rep. Kevin Yoder, R-Kan., after he tweeted about meeting with her, calling her “the face of the green-card backlog.”

In an email to The Daily Iowan, Yoder said Sri perfectly encapsulates the need for legislation to reform the arbitrary and country caps that he deems unfair.

“Our immigration system is broken, and we should be keeping those who are making such a positive impact on our country,” he said.

Yoder is the first sponsor of the Fairness for High-Skilled Immigrants Act, a bill that was introduced in the House on Jan. 10, 2017.

As the clock ticks away toward February, Sri is focused on raising awareness to educate people about the green-card backlog. She has worked closely with friend Rachel Zuckerman, a UI alum and former student-government president.

The two have known each other since they were in UISG together.

They started a Facebook page to help bring awareness to Sri’s situation, which, Zuckerman said, is a reminder of a need for comprehensive immigration reform that addresses what she calls the breadth of injustices in the current immigration system.