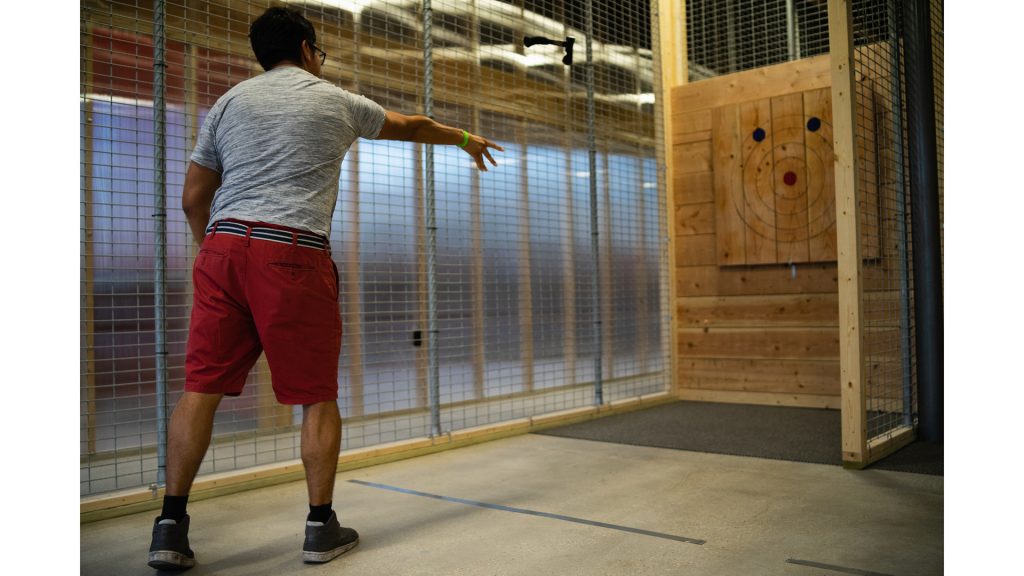 A customer throws a hatchet during the soft opening of Hatchet Jack's on Saturday, June 30, 2018. Hatchet Jack's will be opening soon and allows patrons to throw axes while enjoying beer and wine. (Matthew Finley/The Daily Iowan)

Feel like throwing a hatchet while drinking a beer? A new Iowa City bar offers this ‘Game of Thrones’-inspired experience.

Iowa City residents now have the option of throwing hatchets while they drink.

On June 30, Hatchet Jack’s, 101 Highway 1 W. had a soft opening for friends and family. The grand opening will take place July 13.

Nick Carroll, a co-owner of Hatchet Jack’s, got the idea when he went to the East Coast to visit Jim Pearson, a college friend and now business partner. He said they first saw hatchet throwing in “Game of Thrones.”

Many people might have a misconception when they hear “throwing hatchets and alcohol” put together in one place, he said, but he has taken a lot of measures to make sure everyone remains safe.

“I’ve been in the industry for a lot of years, and I can notice if someone is way too intoxicated,” Carroll said. “I feel like it’s all about control.”

There is a list of rules customers must follow at Hatchet Jack’s to ensure people handle the hatchets responsibly. The first rule: “Don’t be an idiot”; the second, “Seriously, don’t be an idiot.”

Guests sign waivers saying Hatchet Jack’s has the right to remove them from the property if they do not follow the rules or if they become too intoxicated.

Then, guests are free to rent “lanes” to throw hatchets at a wooden target.

In Hatchet Jack’s, there is also a bar area where it serves wine and beer. Some of the beer selection includes local brews from Reunion and Big Grove.

Guests throwing hatchets are limited to three drinks, which are kept track on a wristband. Hatchet throwers are given a different color wristband than non-hatchet throwers, and a hole is punched for each drink.

There were many people at the soft opening throwing hatchets, including Lauren Yuen.

“It’s really fun, it’s challenging, but it’s new, and there’s nothing like it around here,” she said.

She said she understands how people might have a bad reaction when they hear the idea of throwing hatchets, but she said they shouldn’t, because it feels safe.

Meghan Pearson, who came all the way from New Jersey to help with the opening, said she is excited about how the planning has gone.

The owners have other Hatchet Jack’s openings as well, including in the Des Moines area.

“We’ve been really busy trying to organize everything, and everything is coming out great so far,” Pearson said.