Remembering when 6-on-6 basketball ruled Iowa 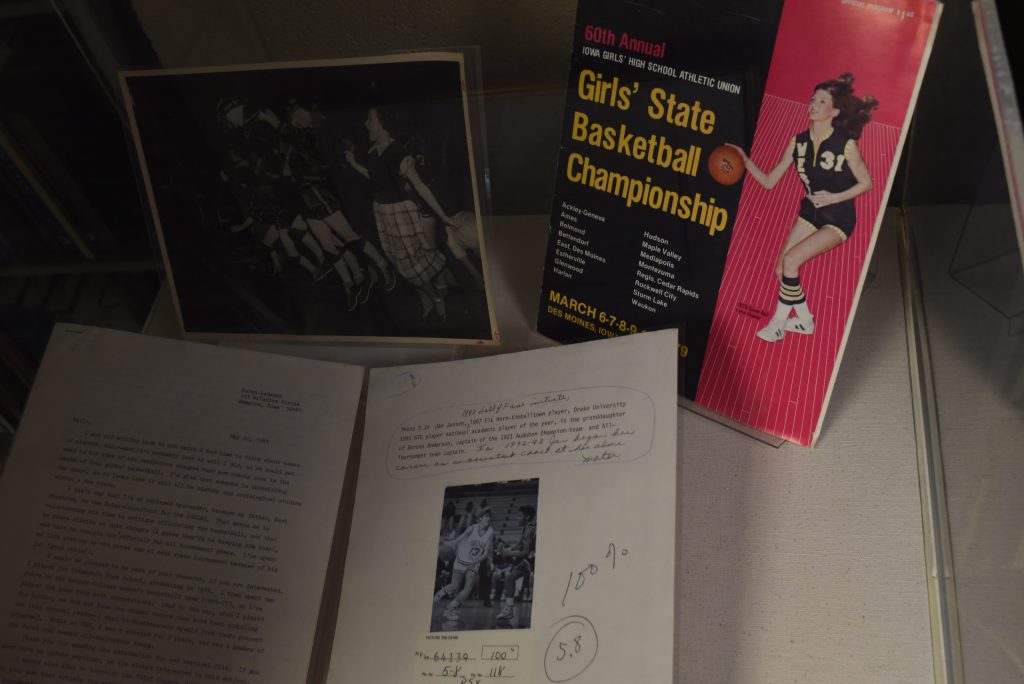 A women's 6-on-6 pamphlet and signed book on display in the Women's Archive at the Main Library, June 27, 2018. The women's 6-on-6 archive is on display all across Iowa this summer. (Paxton Corey/The Daily Iowan)

The Iowa Women’s Archives remembers women’s sports history this summer with a traveling exhibit on 6-on-6 basketball, a somewhat controversial version of the game played by Iowa girls and women throughout most of the 20th century.

“We collect the history of Iowa women from throughout the state, not just southeast Iowa, so we wanted to have some events as part of our 25th-anniversary celebration, which reached out across the state,” said curator Kären Mason. “We thought, What better way than to focus on 6-on-6, because towns all over the state played it.”

The traveling exhibit has visited Mount Vernon and Ottumwa, Iowa. It reached Guthrie Center June 23. Future stops include Jefferson, Ames, and Conrad. The archive keeps a smaller version of the exhibit in its space on the third floor of the Main Library as well.

In each town, the exhibit hosts discussions and collects photos, artifacts, and memories from former 6-on-6 players eager to reminisce.

“There’s so much more to it than just the game,” Mason said.

Played only by girls and women in Iowa and some other states, 6-on-6 basketball’s main difference from today’s 5-on-5 was a divided court. Guards could not cross half-court and had only two dribbles to pass the ball to offense, who remained on their side with a two-dribble limit as well.

As time went on, some schools, especially in Iowa’s more urban areas, started playing full-court 5-on-5.

In 1983, three girls filed a lawsuit challenging 6-on-6 as discriminatory, fearing colleges would not give athletics scholarships to girls who never shot the ball. Over the next decade, the Iowa Girls’ High School Athletics Union fully transitioned to 5-on-5, holding the last 6-on-6 tournament in 1993.

Jennifer Sterling, a sports studies lecturer in the UI American Studies Department, played the final two years of 6-on-6 and the first two of 5-on-5 as a high-school student. Today, she studies the lost game, working alongside Mason and others on the exhibit, giving talks, and chronicling and analyzing the history of women’s sports with her Women’s Sport in Culture class.

She said her generation saw the change to 5-on-5 coming. She and Mason said players from the 1950s through 1980s, however, overwhelmingly mourn the loss of 6-on-6.

“I think that most women who talk to us really love the game of 6-on-6,” Mason said. “It was different from the boys but in a way that was great, because it made Iowa unusual.”

The girls had as much following as the boys, she said. In rural towns, winning teams became stars for bringing attention to their communities.

Heather Heddens of Washington, Iowa, played 6-on-6 for the Mediapolis Bullettes from 1969 until 1973, when her team won the state tournament. Recently, she donated the Converse Hi-Tops she played in to the women’s archives.

Especially in smaller communities similar to her childhood town of 1,200, she said, girls who could shoot accurately still got to play as guards. In her opinion, the 1983 lawsuit discriminated against defenders.

“It was a really frivolous lawsuit because they didn’t really think about who would get to play,” she said.

Heddens said her team often scrimmaged with the boys using 6-on-6 rules. She believes that the two-dribble limit made the boys work harder on passing and getting open instead of dribbling excessively and slowing down the game.

“You talk to anyone who grew up watching it, it was a game of finesse,” she said.