March For Our Lives tour comes to eastern Iowa 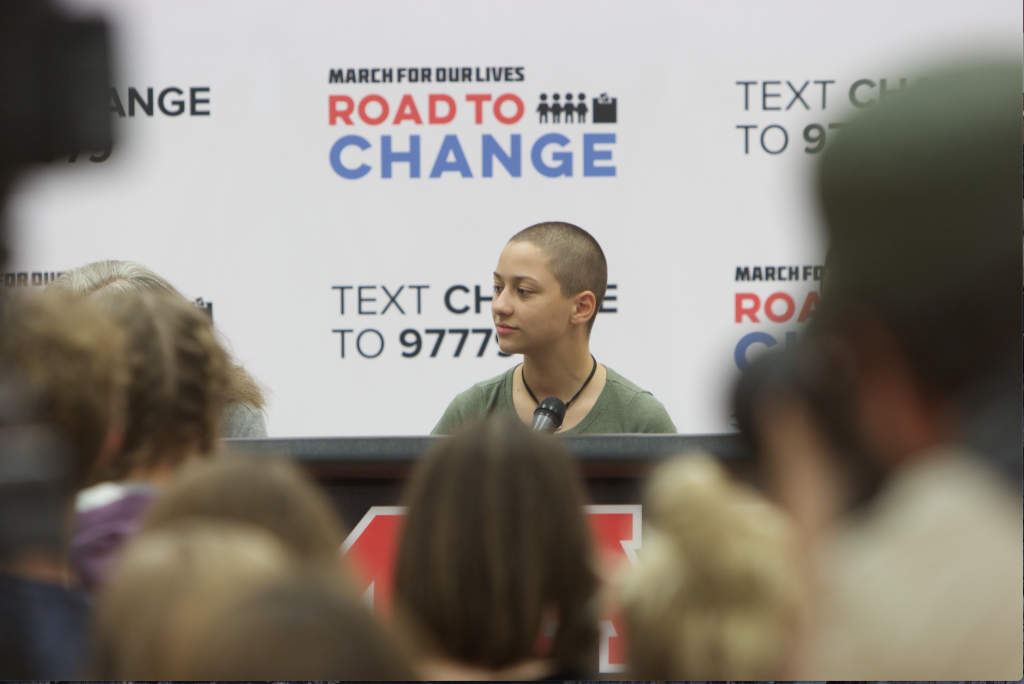 Parkland student Emma González listens during the panel at the March For Our Lives event in Marion, Iowa on June. 21, 2018. (Gage Miskimen/The Daily Iowan)

MARION — On the night of June 21, hundreds of people packed into Linn-Mar High School’s gymnasium to be a part of the conversation on gun violence in America.

Students from Stoneman Douglas High School in Parkland, Florida, are currently in the midst of the March For Our Lives #RoadToChange Tour. The bus tour plans to visit around 50 stops in 20 states, helping individuals register to vote and discuss gun reform.

The Parkland students were joined by students from Chicago as well as community members from the Marion and Cedar Rapids area.

According to the March For Our Lives website, the mission and focus of the group is to “ensure that no special-interest group or political agenda is more critical than the timely passage of legislation to effectively address the gun-violence issues that are rampant in our country. We demand morally just leaders to rise up from both parties in order to ensure public safety.”

The group’s listed goals include implementing universal background checks, funding the Centers for Disease Control and Prevention to research the gun-violence epidemic in America, and banning high-capacity magazines and semiautomatic assault rifles.

The tour has been in Iowa the past two days, also visiting Sioux City and Cedar Rapids.

During the tour’s stop in Sioux City, the students stopped by the office of Rep. Steve King, R-Iowa.

King had criticized Emma González, a recent graduate of Stoneman Douglas, over social media for wearing a Cuban flag on her jacket during the March For Our Lives event in Washington in March.

According to The Des Moines Register, the students had hoped for an apology from King, but they were instead locked out of the office after talking with members of King’s staff.

The town-hall event started with written questions for the students on the panel.

González said at the beginning of the panel the goal of March For Our Lives is not to disarm citizens.

“We’re not trying to take away your guns,” she said. “We are here to ask, ‘Hey, don’t you think we should have stricter regulations on them?’ ”

Stoneman Douglas student Cameron Kasky said the discussion on gun policy in America comes down to having civil conversation.

“It’s about learning your facts, using logic, and trying to avoid emotion,” he said. “All we all want is for the people out there to be safe. We all want the same thing; we just want it in a different way.”

According to the NRA, the ratings are based on the candidate’s voting record on Second Amendment issues.

Following the panel was a public question session in which members from the audience could come up and speak to the panelists.

Many audiences members thanked the students on the panel for advocating against gun violence. Others questioned them further on how they think a ban on semiautomatic rifles would work in America.

Kasky said he thinks a lot of recent mass shootings could have been stopped if there were better systems in place for personal gun sales, including gifting from family member to family member.