Nontenure-track faculty continue meetings with UI officials, even though the 2017-18 academic year has come to a close. 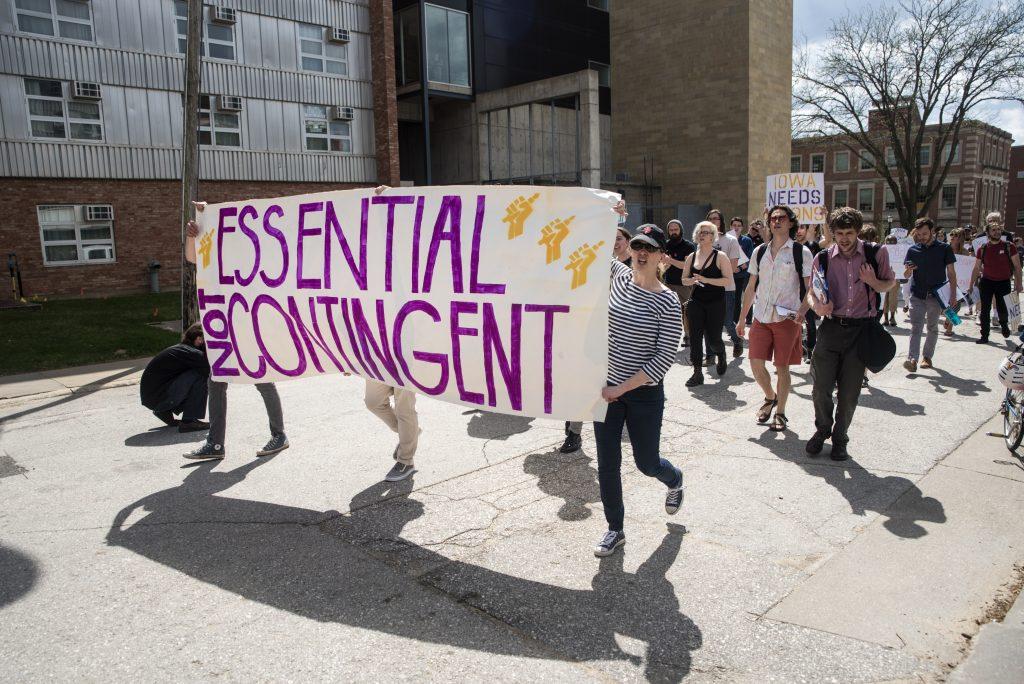 Protesters march from the Pentacrest to the home of UI President Bruce Harreld on May 4, 2018. The UI's nontenured faculty — grown to 52 percent since 2011 — advocated for greater job security, fair pay, and benefits. (Olivia Sun/The Daily Iowan)

Even though the 2017-18 academic year has come to a close, University of Iowa nontenure-track faculty say they remain vigilant in the fight for transparency and equal treatment in and out of the classroom.

Their list of demands includes pay raises consistent with the cost of living, health insurance, and parental leave. Lecturer Elizabeth Weiss said that even though the school year is over, faculty members are continuing conversations with UI decision-makers over the summer.

“I’m really proud of what we’ve accomplished so far, working in solidarity with our colleagues,” Weiss said. “We’ve made steps forward, but what we’ve heard from the university is talk – just to be clear, talk isn’t bad – but we’re demanding concrete action.”

Andy Lewis, a lecturer in the English as a Second Language Program, said he agreed the meetings are an “important first step” in breaking down the communication barrier between faculty members and UI administrators. While believes communication is important, he said there are key elements officials need to realize.

“Talking to people, you realize that as time has gone by, more and more work is being put in the hands of nontenure-track faculty members,” he said. “A reflection of that work load and allocation of resources is not being done.”

Russ Ganim, the president of UI Faculty Senate, said he could not comment from the position of Faculty Forward but noted that his group is taking steps to hear the concerns of nontenure-track faculty.

“From the Faculty Senate perspective, what I can say is we’re looking at the issues raised and have formed committees to study the problems, and the committees are meeting throughout the summer,” Ganim said. “[The committees] are looking at issues regarding contracts, representation, benefits, things like that.”

Aside from meetings with administrators, nontenure-track faculty brought their concerns to the state Board of Regents on June 7.

Meaghan Harding, a UI lecturer in English as a Second Language, detailed her grievances at the meeting.

“I’m here today to talk about issues of fairness and transparency faced by contingent faculty at the University of Iowa,” she said. “What all of these job types have in common is a lack of job security and a lack of transparency about how their contracts are or are not renewed.”

RELATED: Contingent faculty speak to Board of Regents

The lack of transparency, Harding said, exposed itself at the end of last year when one-year contracts were offered, as opposed to the three-year contracts “we all thought we were applying for.” She also said she was unaware that interviews were the only deciding factor regarding contract length.

Matt McBride, a former lecturer in the Rhetoric Department who was also present at the June 7 meeting, said he left his job at the UI, even though he was happy. He believes nontenure-track faculty are being “penalized” for choosing to stay at the UI.

“Last month, I handed in my resignation,” McBride said. “I liked my job ​— my specialty was teaching writing to speakers of other languages … shortly after I was hired, I attended a meeting called by Dean [Raúl] Curto. He stressed that lecturer positions at Iowa were designed to be long-term positions. I believed him, until I started talking to people who had worked at Iowa long-term.”

Associate Provost Kevin Kregel, in a statement to the DI said the university believes in a collaborative approach when dealing with faculty concerns and takes issues seriously.

“Part of this collaboration involves working through the university processes including creating representative committees to resolve such matters. We are pleased to have begun this process and hope it will continue to be the direction moving forward,” Kregel said.