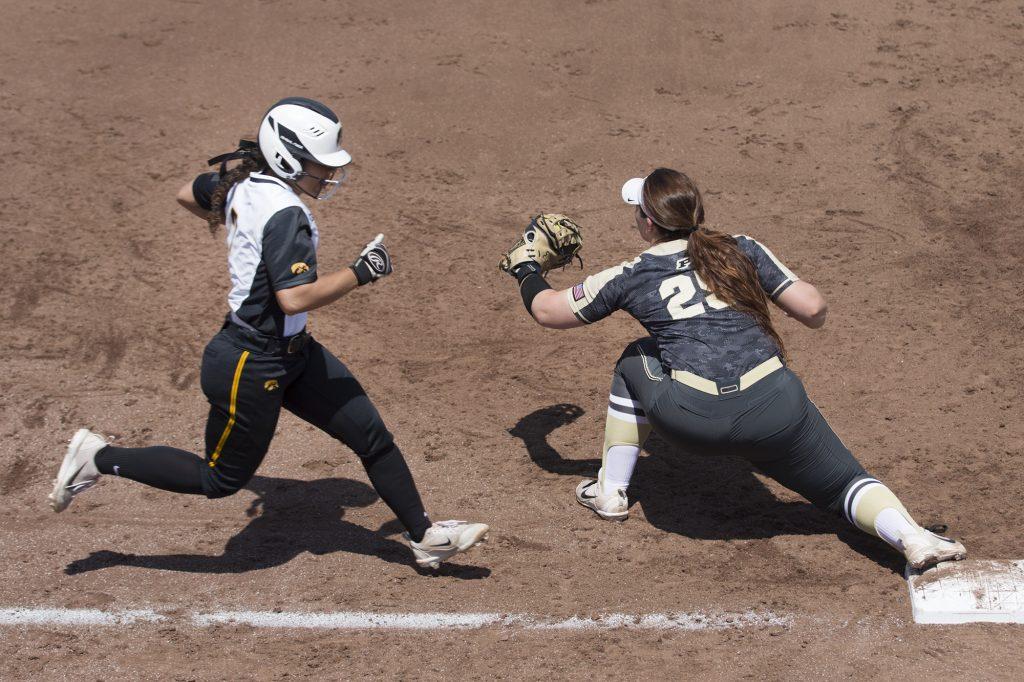 The Daily Iowan; Photos by Shiva

Iowa's Lea Thompson is tagged out by Purdue's Lexi Huffman during a softball game between Iowa and Purdue on Sunday, May 6, 2018. The Boilermakers spoiled the Hawkeyes' senior day, 6-0. (Shivansh Ahuja/The Daily Iowan)

With a Big Ten Tournament berth secured before the start of Sunday’s series finale against Purdue, Iowa softball took another conference loss in the absence of urgency.

Penn State took a victory from Minnesota on May 4, and Iowa began its weekend with a loss. If both series had resulted in sweeps, Penn State would have overtaken Iowa for the last Big Ten spot.

However, with the Nittany Lions’ losses to the Gophers on May 5 and Sunday, the Hawkeyes came out with an outright bid for the tournament without the need for a tiebreaker.

On Sunday evening, the Big Ten announced its conference tournament seeding. Michigan is the No. 1 seed, with Minnesota earning No. 2.

Iowa clocked in as the 12th seed. The Hawkeyes will face No. 5-seed Ohio State at 7 p.m. Thursday in Madison, Wisconsin.

On Senior Day, the Hawkeyes were in their last game at Pearl Field but were not facing the end of their season.

After scoring 1 run in the first two games of the series (12 innings), the Hawkeye offense got a slow start again in Game 3.

Purdue jumped out to an early lead in the second inning, scoring 4 runs, and added on to take the 6-0 lead going into the bottom of the fifth.

The Hawkeyes recorded their second hit of the game on an infield single by shortstop Aralee Bogar, and she advanced to second on her 23rd steal of the season.

Following a scoreless defensive half inning, Iowa returned to the plate. Center fielder Allie Wood tried to jump-start the offense with a single down the left field line but was thrown out in an attempt to stretch it into a double.

Wood’s single was Iowa’s last hit of the game. In the bottom of the seventh, the Hawkeyes went down in order to take the last loss of the regular season, 6-0.

“It’s a new season. It doesn’t really matter what we did in February, March, April, or the beginning of May,” head coach Marla Looper said. “[We’re] kind of excited to clean the slate and get back to work.”

Allison Doocy will likely get the ball to start the first game of the tournament, and she looks forward to bouncing back from taking the loss on May 4.

Despite the team’s recent struggles all around, the players don’t lack confidence — after all, Iowa took down No. 1 seed Michigan earlier.