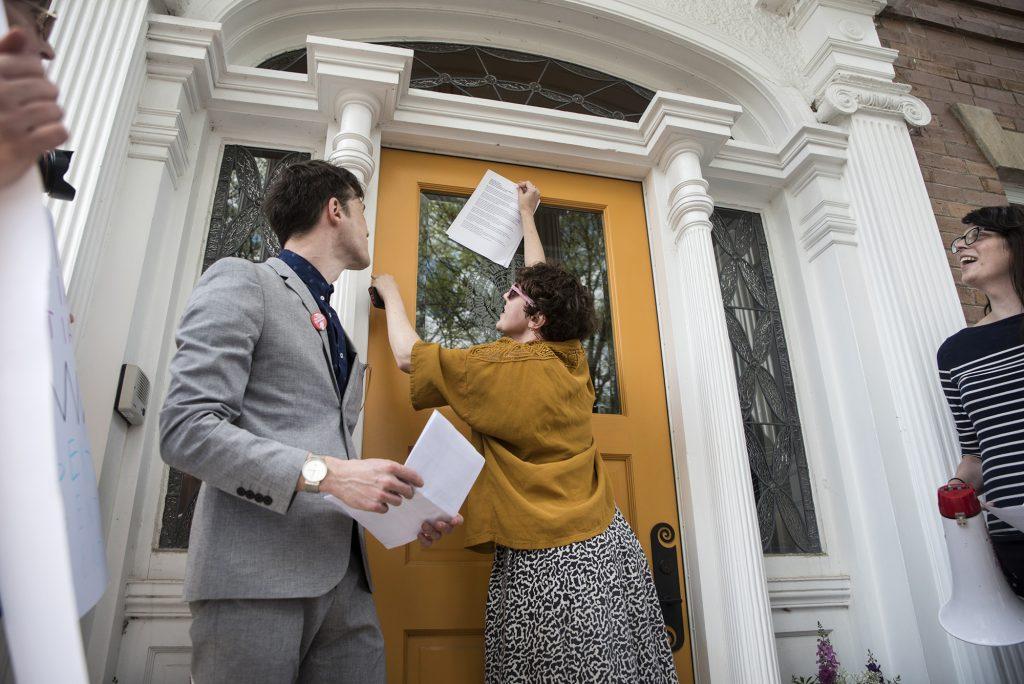 Meaghan Harding tapes a letter to the door of Bruce Harreld's home on May 4, 2018. UI's non-tenured faculty—grown to 52% since 2011—advocated for greater job security, fair pay, and benefits. (The Daily Iowan/Olivia Sun)

After failing to meet with University of Iowa President Bruce Harreld at his office last week, nontenured-track faculty decided to try him at home.

On a warm and sunny May 4, nontenure-track faculty and their allies met on the Pentacrest, then marched to the UI President’s Residence to deliver a list of demands aimed at creating a more stable and sustainable work environment, organizers said.

Harreld was not home.

Meaghan Harding, a UI lecturer in English as a second language, said short contracts, stagnant wages, and the lack of job security aren’t suitable for more than 50 percent of the teaching staff on campus, who tend to have heavier teaching loads than tenured faculty. She is a member of Faculty Forward, an organization working to get good jobs for all campus employees and affordable, accessible, and quality higher education for everyone.

“We think we provide a really valuable service to the university … and our current job conditions don’t reflect that,” she said.

As they walked through the T. Anne Cleary Walkway and down the middle of Clinton Street, protesters waved signs and chanted, “No union, no peace,” and “Hey hey, ho ho, Harreld’s greed has got to go,” to the beat of a drum.

Harding said they had previously tried to meet Harreld in his office, with no luck. They also held a meeting with Associate Provost for Faculty Kevin Kregel on April 25. In an email sent to Faculty Forward, Kregel suggested a committee to be convened next fall. Rhetoric instructor Megan Knight said the time for committees has passed.

Knight has been with the Rhetoric Department for 20 years, and in that time, she said, there haven’t been any changes at the university level. Her pay has remained stagnant, and while she was added to the instructional track, she said it didn’t actually change her job at all.

“The instructional track, as I understand it, is an attempt to give us a small amount of representation in committees and so forth …” she said. “As far as I can tell, it hasn’t made any real difference in anyone’s work conditions.”

In an interview with The Daily Iowan on May 4, Harreld said he supported the marchers’ right to protest, but they still need to go through the correct processes to make progress on their demands. He said faculty need to work with the colleges for salary and benefit changes.

“The last thing any of our deans want me to do is to actually wave a wand and actually change salaries, change benefits,” he said. “These decisions are collegiate in nature.”

With unionizing, Harreld said, that’s the faculty’s choice, but if they decide to go through with it, he will not meet with them to avoiding accusations of tampering.