Gov. Kim Reynolds has signed the ‘heartbeat bill’ into law & the move has met with mixed reactions. 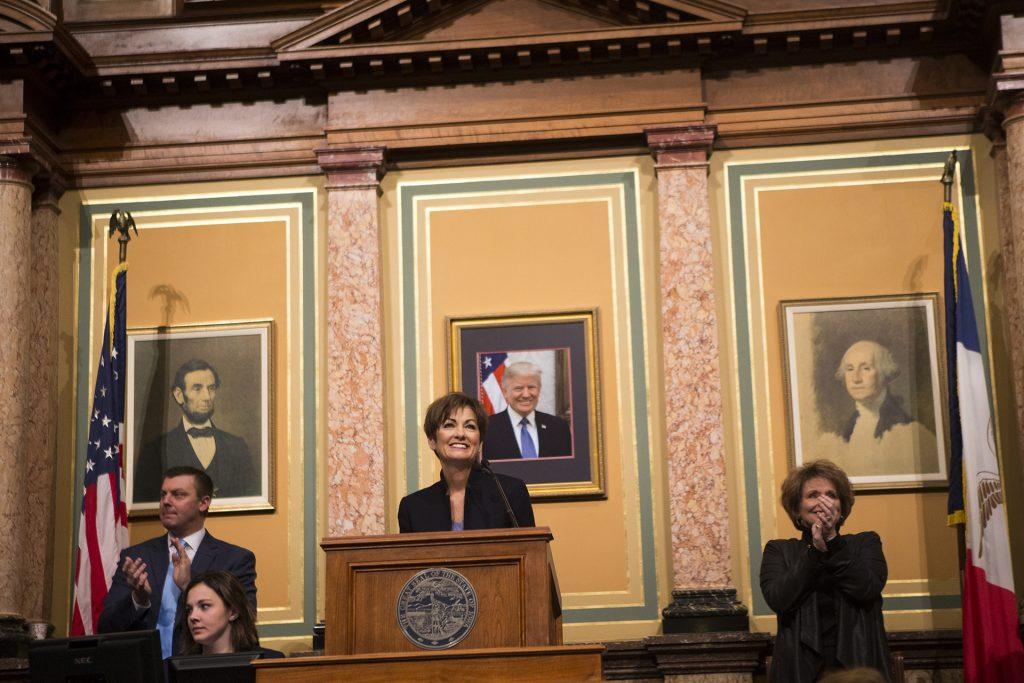 Iowa Gov. Kim Reynolds speaks during her first Condition of the State address in the Iowa State Capitol in Des Moines on Tuesday, Jan. 9, 2018. Reynolds took over the governor office in May of 2017. (Joseph Cress/The Daily Iowan)

Gov. Kim Reynolds on May 4 signed into law a controversial bill that has been called the most restrictive abortion measure in the nation.

Senate File 359is informally known as the “Heartbeat Bill”; it would ban physicians from performing abortions once fetal heartbeats are detected. There are some limited exceptions.

“I understand that not everyone will agree with this decision. But if death is determined when a heart stops beating, then doesn’t a beating heart indicate life?” Reynolds said in a press release following the signing of the bill. “For me, it is immoral to stop an innocent beating heart.”
RELATED: Fetal-heartbeat bill heads to Reynolds’ desk – what happens next?
Francine Thompson, the co-director of the Emma Goldman Clinic of Iowa City said she was not surprised by the signing, but she was disappointed and disgusted by Reynolds, noting she believes it is an extreme and intrusive bill.

“It’s just about controlling women, and women should be the one to have control of their fertility,” Thompson said. “That should not be left up to government.”

Sheryl Schwager of Johnson County Right to Life said that while she is happy about the bill being passed and signed, she believes legislation should go further and provide no exceptions.

“All life should be protected regardless of how the child was conceived or whether there are cases of fetal disability,” she said. “All life is valuable.”

According to the Mayo Clinic, the heart begins forming during the fifth week of pregnancy. Around this time, increased levels of estrogen and progesterone stop menstrual periods, which is often the first sign of pregnancy. Thompson noted that at six weeks, a rudimentary heartbeat can be detected.

Thompson said these criteria would rule out most abortions, noting most do not know they are pregnant by the time the heart is formed in a fetus. Also, she said, many in their reproductive years may have late menstrual periods because of such factors as stress, or periods may be irregular, so women may not notice a missed period due to pregnancy.
RELATED: Reynolds set to sign fetal-heartbeat bill
In order to obtain an abortion under the new law, one would have to undergo an abdominal ultrasound to detect a heartbeat. Unless the physician determines there to be a medical emergency, or in medically necessary cases, women would not be allowed to go through with abortions if fetal heartbeats are detected.

Schwager noted there are more options for those going through with an unwanted pregnancy besides abortion, including going to “life-affirming care centers” in the state and adoption.

Rebecca Wang, a reproductive justice fellow for If/When/How, a national nonprofit network of lawyers and law students and a University of Iowa College of Law graduate, said in a press release that she was particularly saddened by the signing of the bill and that it does not reflect the soul of the Iowa she knows.

“… this abortion ban puts pregnant Iowans in danger by policing their bodies and signaling that Iowa’s elected officials neither trust nor respect the people they represent,” she said in a May 4 press release.

Wang said the bill will undoubtedly be challenged in court and would very likely be struck down. Reynolds noted in a press release that she believes the courts could put a hold on the law until it reaches the Supreme Court.
RELATED: Laursen: Reynolds faces polarizing decision with ‘heartbill beat’
“… this is bigger than just a law. This is about life,” Reynolds said in a press release. “I am not going to back down from who I am or what I believe in.”

On May 4, Planned Parenthood of the Heartland announcedit would be filing a lawsuit against Reynolds if she signed the bill into law.

Schwager said it is hard to tell what the outcome of an appeal would be, but it would be worth it to let the courts decide, adding that she believes the ruling in the case of Roe v. Wade, which extended the right to privacy protected by the 14th Amendment to the U.S. Constitution to a woman’s right to an abortion, is unjust.

“The right to life is the foundation of all of the other rights that we enjoy,” Schwager said.