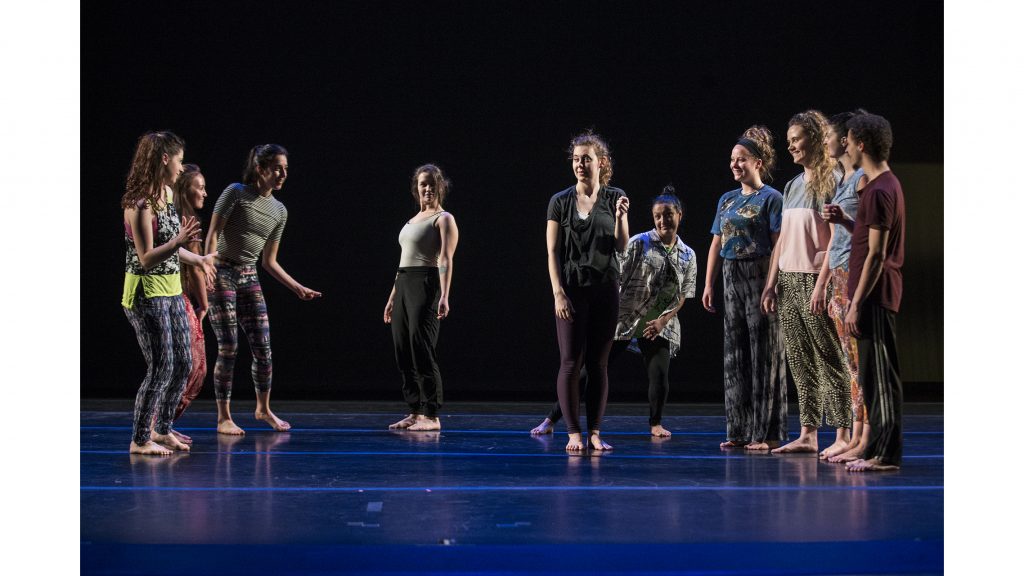 The Daily Iowan; Photos by Shiva

Members of the University of Iowa Department of Dance rehearse for the Undergraduate Dance Showcase at Space Place Theater on Wednesday, May 2, 2018. (Shivansh Ahuja/The Daily Iowan)

University of Iowa undergraduate dancers are set to take their final bow this year.

The UI Dance Department will host its annual Undergraduate Dance Concert this weekend, which will feature six pieces choreographed by undergrad dance majors.

The event, which will take place at Space/Place, often includes dancers of all ages but is a special last performance for graduating seniors.

Senior Erin Durian started dancing when she was young, growing up in Iowa City. She choreographed a contemporary solo for herself, which started as an exercise that she choreographed for someone else. In the class, students were prompted to make pieces based on a visual-art piece, and Durian chose the Casa Batlló in Spain, designed by Antoni Gaudí, whom she is a fan of.

“It morphed into words I used to describe the building,” Durian said. “It seemed skeletal, and it reminded me of things that washed up on the beach, so I kind of just went from there.”

Durian said she also does a little stage management and is looking into teaching English in South America after graduation.

Senior Tessa Ritchey started dancing when she was 3 and got into choreography when she was 8 or 9, making up dances on her own. She performs mostly contemporary pieces.

“One of my dance teachers was leaving, and I and my friends loved her so much, so we got together to make a piece for her for the recital,” Ritchey said.

The show will be an end-of-the-year celebration for the seniors, many of whom started their performances at the undergrad concert four years ago.

“It was my very first concert in the Dance Department, so it’s cool to be finishing on that, too,” Ritchey said.

She said she will move to Chicago after graduation to work at a dance studio and someday would like to work for a dance company. She said she was going to try her best to network while working at the studio to connect her to the larger world.

Ritchey will perform in two pieces in the concert. One, a duet to violin and viola, and the other is a 10-person piece and includes her roommate, Durian.

In the group dance, Durian is sleep-deprived and dealing with hallucinations, Ritchey said. She said it wasn’t hard to put the piece together, but it was hard to get everyone together at the same time to rehearse. The piece will be silly, though, she said, and even includes the dancers eating real ice cream for a short moment.

Normally, the pieces must go through a judicial process, and the chosen pieces are performed. However, this year, there were fewer auditions that usual, and everyone who submitted a piece will perform.

UI senior Anya Kress said she wasn’t too sad to have her last concert, and she is more excited to get out into the real world. For the concert, she is doing a duet with friend Corbin Phillips.

“We kind of jokingly said at the beginning of the year, ‘Let’s do a duet,’ and then it just became a thing where we were like, ‘No, we’re not joking anymore, we’re doing this,’ ” Kress said.

Phillips said he has spent a lot of time dancing ballet, but this duet was largely a silly piece about the banter between the two of them.