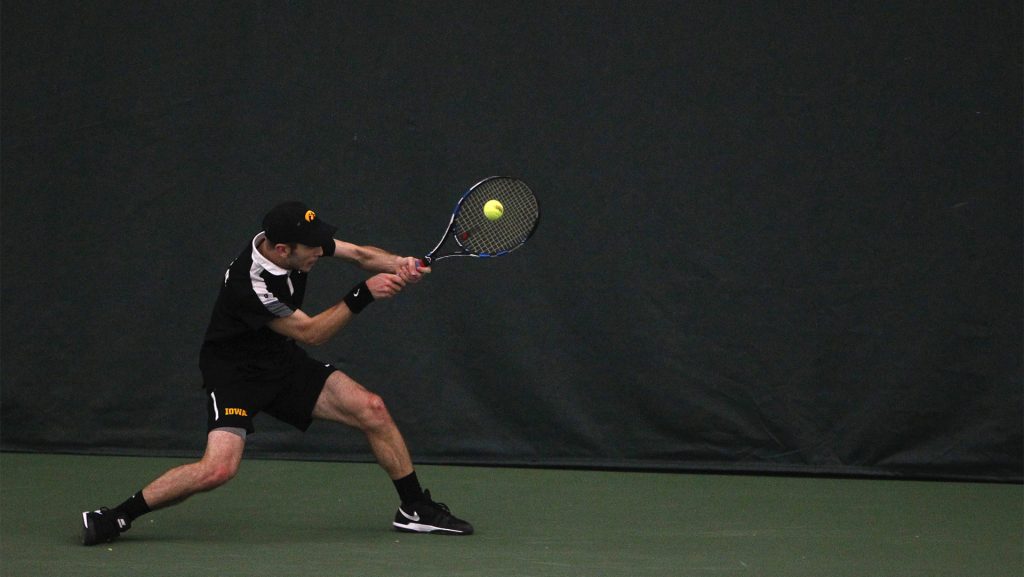 Iowa's Jake Jacoby returns the ball during a match at the Hawkeye Tennis and Recreation Center on Friday, Mar. 11, 2016. Overall, Iowa lost to Nebraska 3-4. (The Daily Iowan/Ting Xuan Tan)

Four years ago, men’s tennis seniors Jake Jacoby and Josh Silverstein were completing their first season as Hawkeyes. Even during their early months in the Midwest, the two proved they could be valuable assets.

Both players were a part of head coach Ross Wilson’s first recruiting class, and he’s seen their growth on and off the tennis court.

“It’s been awesome to have those guys as part of the program,” he said. “We’ve traveled the country together, we’ve won, we’ve lost, put in tons of hours of practice during the season and in the summer. It’s great to be with those guys, compete with [them] and to see what they have helped us achieve as a team. [I] can’t thank those guys enough for the effort and energy they put in, not only on the court but off the court.”

In his college début, Jacoby immediately excelled in singles competition at the Purdue Invitational on Sept. 19, 2014. The native of Little Rock, Arkansas, took his first Hawkeye match in straight sets over a senior from Marquette.

Jacoby rounded out his freshman year posting a 20-13 singles record, 14-12 in doubles, with five matches along side now-assistant coach Matt Hagan. He boasted the third-best singles record on the team during its spring season.

“Jake has been a leader since he first got to Iowa,” he said. “[Jacoby] was someone who always did the right things, and then came in and he’s won so much at 5 and 6 in the lineup the last four years, and it’s pretty incredible. He’s been a guy that everyone on the team kind of looks up to and tries to be like.”

Over the past four years, Jacoby believes he and Silverstein have helped change the culture of Iowa men’s tennis.

“Josh and I came from very different parts of the country to come here, to play in the Big Ten, to play these teams, and I think we have developed a more competitive culture where we think we can not only compete with teams … but win a lot of those matches,” he said.

Silverstein also garnered his first Iowa victory during his college début at the Princeton Farnsworth Invitational in September 2014.

As a freshman, Silverstein split his time between No. 4 and 5 in singles competition and played alongside four different doubles partners. At the conclusion of the 2014-15 season, Silverstein had a 17-10 doubles record and boasted the second highest singles record for the team, 16-7.

After sitting out during the fall of 2015, Silverstein made his way up the singles lineup to play as a sophomore. Dropping only one match No. 1 and contributing 13 more singles wins, he proved he was ready to play a vital role for the team high in the lineup. Although he has a six-match deficit in singles this season, he tallied winning records in both singles and doubles decisions as a Hawkeye.

Silverstein has made an appearance in both the singles and doubles national rankings, reaching as high as 66th and 77th, respectively. Throughout his career, the senior has competed in 36 matches at No. 1 and contributed his largest No. 1 singles victory over Charlie Broom of Dartmouth to clinch the Hawkeyes’ highest ranked win in program history.

“Josh came in playing pretty low in the lineup, and then his last couple years, he’s played 1 and 2. That just shows how hard he competes,” Hagan said. “He’s had some of the biggest wins in Iowa history … he’s such a competitor, and when he wants to go out, and just compete, and fight every single match, he can kind of beat anyone.”

Overall, the seniors have helped the Hawkeyes win more than 55 matches in their four-year careers.

Both seniors intend to continue their tennis careers in some capacity after graduation. Jacoby has accepted a graduate assistant coaching position at Toledo, beginning this fall. Silverstein hopes to continue traveling throughout the country playing professional tennis.